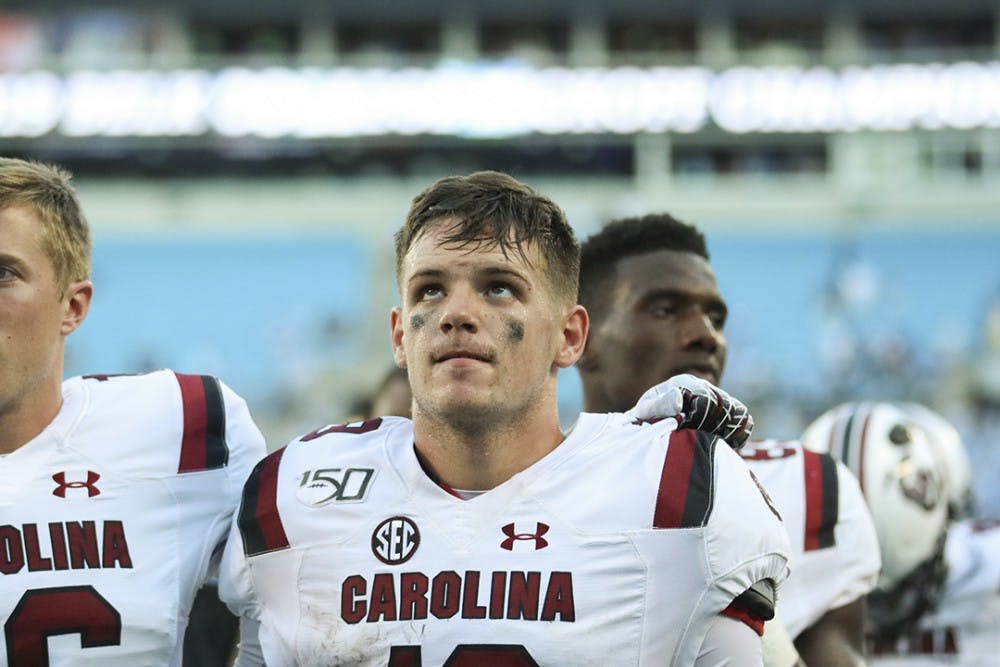 South Carolina's football season did not get off to the start that it hoped for with a 24-20 loss to the North Carolina Tar Heels last Saturday in Charlotte.

Jake Bentley was named the starting quarterback for South Carolina once again in 2019, a position he's held since halfway through his freshman year.

The now-senior signal caller led the Gamecock's offense on Saturday against North Carolina at Bank of America Stadium, despite the arrival of highly touted freshman quarterback Ryan Hilinski.

However, with Bentley out with an injury for at least six weeks, the Orange, California native is being called upon earlier than expected. Hilinski was named the starting quarterback against Charleston Southern on Saturday after news broke on Labor Day afternoon that Bentley was injured.

Hilinski, a former four-star recruit, is ranked second among pro-style quarterbacks in his class and 64th overall according to 247Sports.

However, senior quarterback Jake Bentley was assumed to be South Carolina's starter throughout the offseason.

Bentley comes off of a solid campaign in 2018, highlighted by a stellar outing against in-state rival Clemson, in which Bentley threw for 510 yards and five touchdowns.

While Bentley threw the most interceptions of his career, tossing 14 of them on the season, he did post the highest passing rating of his career at 146.3.

Hilinski impressed coaches early into training camp, enough to earn himself the backup job at the time, bumping former top recruit and redshirt freshman Dakereon Joyner into the third spot on the depth chart.

This depth has come in very handy for Will Muschamp, as it appeared that Bentley would be the main focus for the 2019 season as he looked to captain the team through a difficult schedule.

After the loss to UNC, Muschamp said Bentley was not the only one to blame.

“It’s not on one person,” Muschamp told The State on Sunday night at a teleconference with reporters. “I know everybody wants to blame one guy for it, but it’s not the case. [Bentley] needs to play better at that position, but we need to play better around him, and we didn’t do it.”

In a press conference prior to the UNC game, Bentley said he is excited for the season as the game "never gets old."

He also spoke about the unity and chemistry within his senior class and said they've "been faced with every situation" and have gotten through it together.

Muschamp is counting on that chemistry and the experience of Bentley and others to help Hilinski and the Gamecocks manage the treacherous schedule up ahead.

Hilinski is set to make his South Carolina debut against the Buccaneers on Saturday at Williams-Brice Stadium. Kickoff is slated for noon on the SEC Network.