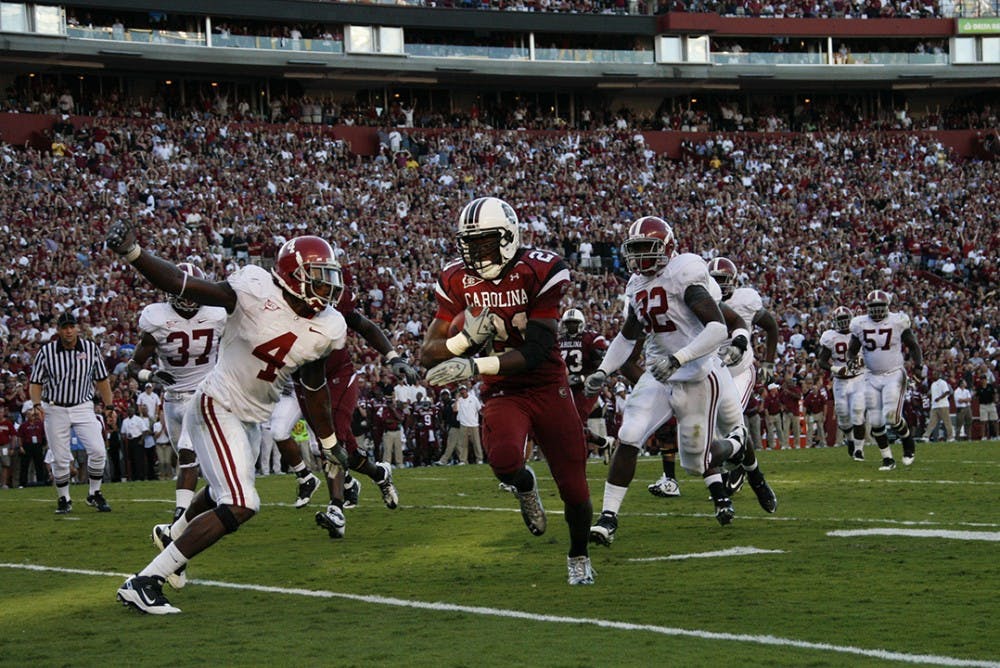 Here comes the Tide: What to watch for in matchup against Alabama

Going into the 2019 season, the Gamecocks are facing an uphill battle. With games against each of the top three teams in the preseason AP poll, South Carolina football owns one of the toughest schedules in all of the nation.

The most daunting stretch of the season starts with week three, as the Gamecocks will play host to the Alabama Crimson Tide. Over the past decade, Alabama head coach Nick Saban has established his program as one of the premier teams in all of sports, winning five national titles during his tenure in Tuscaloosa.

Here are five key things to watch for as the Tide rolls into Williams-Brice Stadium on Sept. 14.

Alabama has not lost many games in recent history. Since 2008, they have lost no more than three games in any season. It is no easy task taking down the Tide.

However, in the previous installment of this matchup, South Carolina came away with a victory in a memorable upset over Alabama back in 2010. Alabama was the top team in the nation when they fell to the No. 19 Gamecocks. Stephen Garcia threw for three touchdowns and led the Gamecocks to their historic upset.

“I remember a lot. We got the lining kicked out of our britches in the game over there,” Saban told The State.

Overall, Alabama owns the winning record against South Carolina in series history. Since the first matchup back in 1937, Alabama leads with a 10-4 record against the Gamecocks.

The Gamecocks will be facing the Tide with a new quarterback at the helm.

Following the week one loss to UNC, Jake Bentley was sidelined indefinitely with a foot injury, thrusting freshman Ryan Hilinski into the starting role for the foreseeable future. Hilinski will face one of the most fearsome defenses in the nation in just his second start of his college career.

Historically, true freshmen quarterbacks have not fared well against Nick Saban-led defenses. Throughout his coaching career, Saban has faced 11 true freshmen quarterbacks. Only four have come away with a win. However, the last freshman to play against Saban did earn a win when it mattered most, as Trevor Lawerence led Clemson over Alabama in last year's College Football Playoff Championship Game.

On the opposite side of the ball, the South Carolina defense will be tasked with slowing down one of the most electrifying players in college football — Tua Tagovailoa.

Tagovailoa earned the starting job at Alabama at the end of the 2017 in spectacular fashion. After falling down early to Georgia in the 2017 Championship Game, Saban opted to bench quarterback Jalen Hurts at halftime. From there, Tagovailoa led the Tide on an improbable comeback to become champions once again.

Now, Hurts is an Oklahoma Sooner, and Tagovailoa hasn't looked back since. In 2018, he threw for nearly 4,000 yards and 43 touchdowns to just six interceptions, solidifying himself as a Heisman contender and potential first overall pick in next year's NFL draft.

The Gamecocks will look to hand Tagovailoa his first in-conference loss ever. It would also be only the second loss of his career.

Alabama is loaded with top talent across their entire roster, including at wide receiver.

Tagovailoa's top target, Jerry Jeudy, displayed why he is the number one receiver at Alabama in their week one matchup against Duke. Jeudy hauled in 10 passes for 137 yards and a touchdown in the first game of the season, drawing attention for his ability to make defenders miss with the ball in his hands.

Jeudy will likely be matched up with South Carolina corner Jaycee Horn. Both Horn and Jeudy were selected on the coaches' All-SEC preseason team, and will face each other for the first time this season.

Horn filled up the stat sheet against UNC, recording five total tackles along with a sack, two forced fumbles and a pass defended. As the Gamecocks' best option at corner, he will likely spend plenty of time along Jeudy. The matchup will certainly be one to look out for when the Tide come to town.

Nick Saban has been revered as one of the best coaches in football history for a long time. As such, his coaching tree of former assistants turned coaches stretches far and wide across the landscape of college football.

One of his disciples is none other than Will Muschamp. Saban and Muschamp have a long history together, dating back to 2001. Muschamp started off as Saban's linebacker coach when he was head coach at LSU. In 2003, Muschamp was promoted to defensive coordinator, as the two brought a title to LSU.

Muschamp followed Saban to the NFL, where Saban was the coach of the Miami Dolphins for a brief stint in the early 2000s. Muschamp eventually left for Auburn in 2006 to become their defensive coordinator, ending their time as coaching workers.

Since their departure, Muschamp has gone 0-2 against his former head coach, losing to Alabama twice as the head coach of the Florida Gators. Muschamp will have another chance to earn his first win against Saban when the Tide travels to Columbia.

Alabama vs. South Carolina kicks off at 3:30 p.m. at Williams-Brice Stadium on Sept. 14.