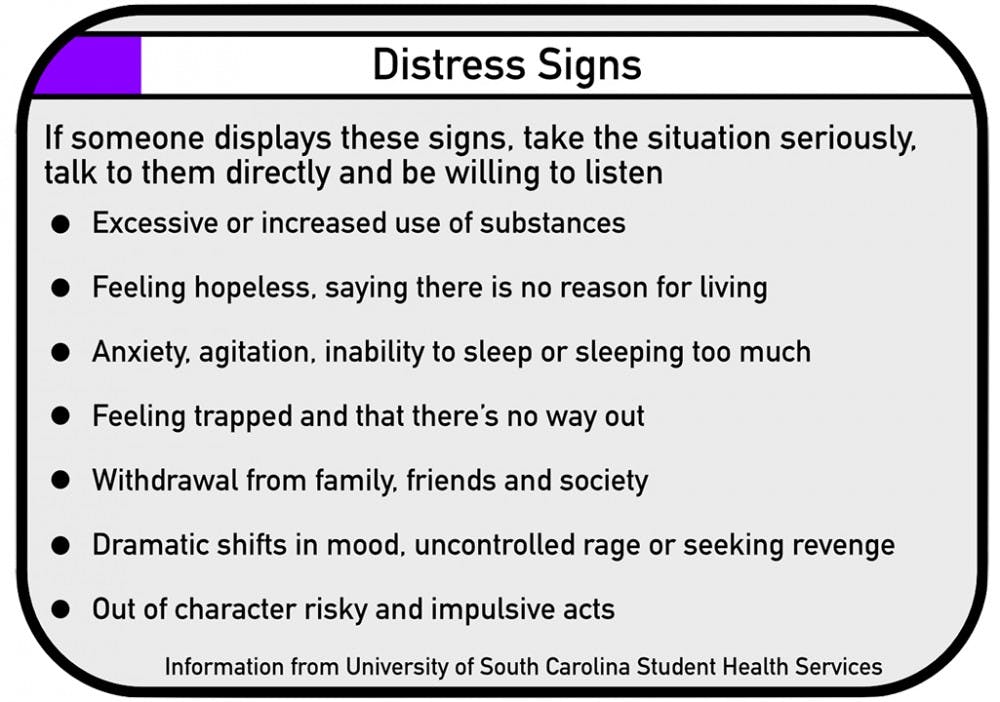 Editor's note: This article discusses suicide and might be triggering to some readers.

Picture yourself in a burning room. Everything around you is on fire and you don’t have much hope. Eventually, you’re forced to get out of the house to avoid burning up.

It’s not that you decided to leave — you had no choice but to get out.

This is what people with depression or suicidal thoughts can feel, according to forensic suicidologist Ronald Maris.

It's not that they're choosing to kill themselves because of something they're going through, it's that their pain has gotten so unbearable they feel they have no other way out, Maris said.

September is National Suicide Prevention Month. Suicide is the second most common cause of death among college students, according to the American College Health Association. A report published by peer-reviewed journal Depression and Anxiety last year said one in five college students are stressed to the point of considering suicide.

So far in 2019 at USC, 8.5% of students seriously considered suicide, compared to 4.6% in 2010 according to the National College Health Assessment. In 2019 so far, 7.8% of students reported they had harmed themselves, compared to 3.5% in 2010. Director of strategic health initiatives Rebecca Caldwell said these numbers are comparable to other campuses.

Still, "8.5% thinking about suicide in the last year is way too many students who are in pain," Caldwell wrote in an email.

It's normal to feel stressed in college. Students have heavy workloads. They're finding their place in new friend groups, away from family for the first time and figuring out how to manage life on their own.

If a student is going through intense stress or feels that they're in crisis, they can walk into the counseling center from 8 a.m. to 6 p.m. Monday through Thursday and see somebody immediately, according to Debbie Beck, executive director of student health services and Healthy Carolina. The center is also open 9 a.m. to 5 p.m. on Fridays and 2 p.m. to 8 p.m. on Sundays.

USC's mental health services work in a triage system, meaning they assign appointments based on urgency.

Many students have complained about wait times, saying they've tried to make an appointment with mental health services, but had to wait two weeks or longer.

Beck said one reason for this is sometimes students have schedules where they can only be seen at a certain time on a certain day. Then, some students only want to see specific counselors.

"If a student has a need that is critical, or they feel that it's critical, then they're going to get seen much, much quicker," Beck said. "Could be a day, or two days."

Some students say the issue is there aren't enough counselors to support the needs of students on campus.

This year, however, she’s feeling much more positive about campus mental health services because an employee laid out her options and explained everything more thoroughly. And now she’s regularly seeing an individual counselor, a nutritionist and a psychiatrist.

Raumann said she thinks her experience last year was a matter of staffing "because I think everybody is just very overwhelmed and they're doing the best that they can with what resources they have."

In the past five years, staff at mental health services has seen about a 50% increase in use of the counseling center and increased its staff by more than 60%. In 2015, counseling and psychiatry had 23 staff members and now it has 38, not including administrative support.

With last month's suicide on campus, many students found themselves grieving at the beginning of the school year. In times like this, professionals at the counseling center emphasize the importance of finding a support system.

"What I definitely encourage [is] reaching out to someone," said April Scott, associate director of campus mental health initiatives. "Not being afraid to talk about it but also it's OK if they don't want to talk about it as well. There's no one right way to process something like this."

The suicide prevention section on the student health services page gives information on how to notice the warning signs of someone who is contemplating suicide.

"Fifty to 75 percent of all suicide victims give some warning signs of their intentions in the week before," the site reads. "Familiarize yourself with the signs and register for suicide prevention training."

It also has a section to sign up for gatekeeper training, which aims to teach participants about the warning signs of suicide, help them gain confidence in responding to a student in trouble and educate them about the resources on campus.

"I think honestly the best way of talking about suicide is doing it on the prevention side and not necessarily only in response to a death," Scott said.