Opinion: There shouldn’t be prayer before football games 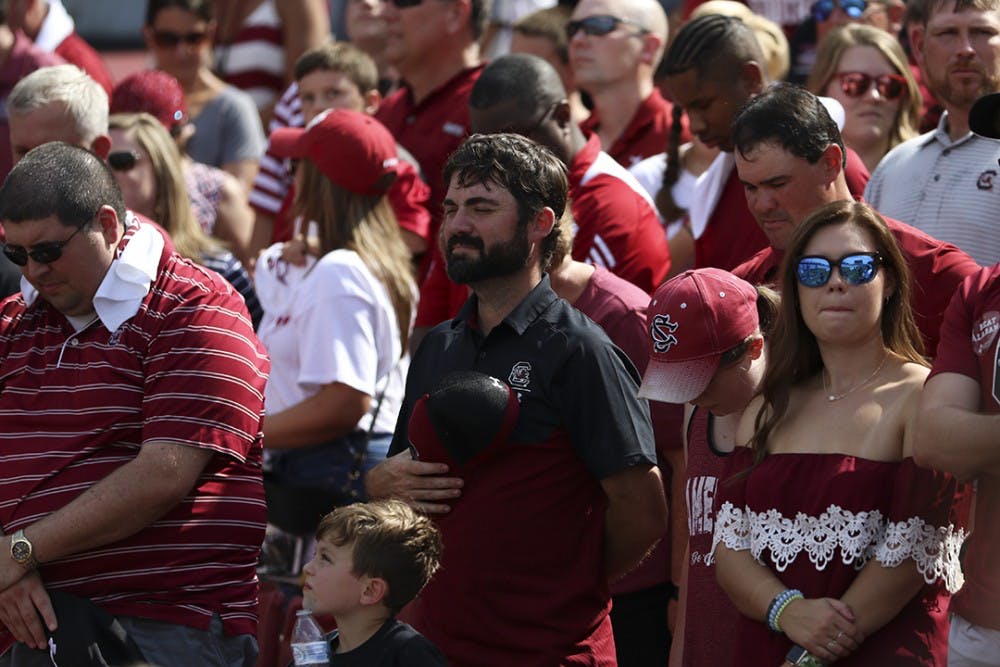 Saturdays in South Carolina come with pregame rituals: tailgates, cheers and the national anthem. However, amidst the bustle of the band and the singing of the alma mater, a prayer is always featured before South Carolina football games.

Although this practice may seem rather normal, it is neither constitutional nor representative of the wide array of beliefs that USC students have. In 1962, the Engel v. Vitale case ruled that public schools could not endorse prayer, even a nondenominational one. As USC is a state institution, it should be required to adhere to similar principles.

Law professor Derek Black confirms this idea and said in an email that the “key question is whether the prayer has coercive effect or, more simply, whether the prayer involves the voluntary desires of students or is something that state officials are encouraging or requiring students to participate in.” The prayer is neither student-led nor elective, and so it should not be permitted in a state school.

Perhaps this practice has continued because of the longstanding tradition of praying before sporting events. Jamie Rogers, the Baptist Collegiate Ministry director, led the prayer for the Charleston Southern versus South Carolina football game. According to Rogers, prayer before games matters because it is an acknowledgement "that we’re in need of [God’s] grace and mercy in every situation, especially in a contest as dangerous as a football game.”

Rogers argued in favor of keeping prayer before games, contending that a person in support of prayer should have the same right to “have their desire met as the one that supports its removal.” Rogers said his prayer was for God’s blessing over all people, saying, “if a person doesn’t believe in God that prayer shouldn’t offend them.”

According to Engel v. Vitae, however, a student’s ability to abstain from participating in prayer does not render that prayer constitutional.

Regardless of the constitutionality of prayer, USC should consider something other than prayer that would be more inclusive for its student body. The leaders of prayer are often of Christian faith, leaving irreligious students or those outside of the Judeo-Christian faith unrepresented. A moment of silent meditation, or perhaps a secular word of hope and encouragement, could be a way to begin football games with the same spirit of positivity without endorsing a specific religion.

Rogers doubts the efficacy of replacing prayer and said he was honored to follow the moment of silence for the then-recent suicide of a student with a prayer, claiming that prayer is a chance “to have the most of us together at the same place & time, to come together in solidarity to turn our hearts toward those around us.” He said it would be a disappointment to get rid of that opportunity.

Religion is not what unites the students of USC. When faced with tragedy, students find peace, not because they all adhere to the same religion, but because they find a common hope beyond their different beliefs. That ability to coexist and unify is what should be preserved, not prayer to a specific god.

“All three of us would love to connect with all students,” Rogers said.

Because these activities are not university endorsed, they are both constitutional and a great way to reach out to students who are interested in the Christian faith. The key difference between a tailgate and a broadcast prayer is the volition of the students. If a student wants to pray before a game, they should be able to, but those who would rather abstain should not be subjected to others’ beliefs.

Prayer can be a hot topic politically and socially but, legally speaking, it is not something that should be endorsed by a government-funded school. This principle is not only good for nonbelievers, but is to the benefit of the very people who consider prayer important. Without rulings like Engle v. Vitale, America would not have the religious freedom it boasts. As USC works continuously towards inclusivity, it should reconsider its stance on prayer.