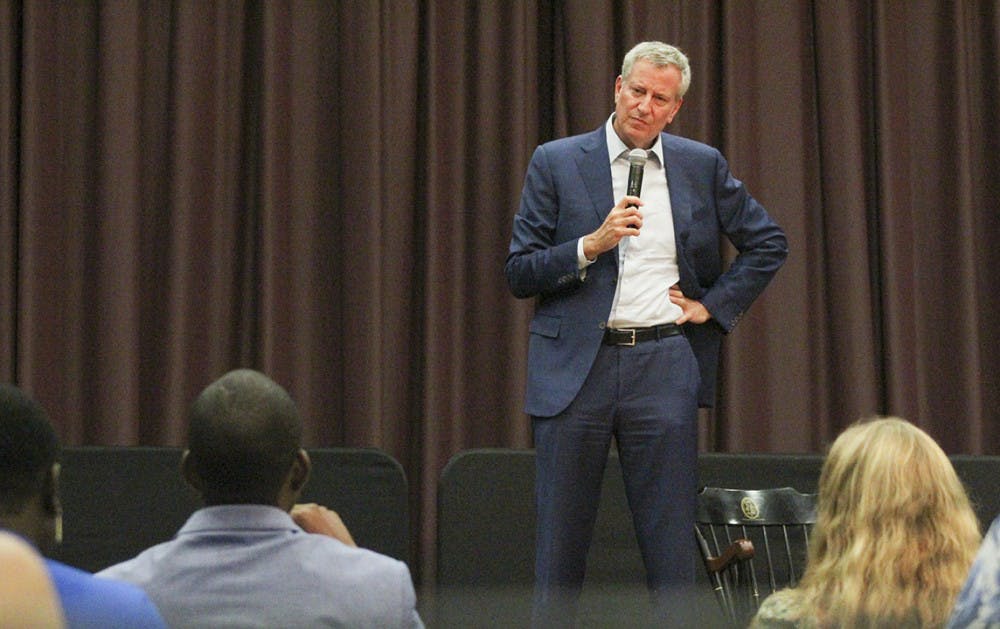 Three candidates seeking the Democratic nomination for 2020’s presidential race visited the University of South Carolina on Sunday in a town hall series hosted by the College Democrats.

Robby Wells, a USC alum, visited several students in the SEC conference room on the second floor of Russell House. In the meeting, Wells candidly spoke of his status as a minor candidate in the race. Wells compared himself to former President Barack Obama, who he said was considered a dark horse candidate before the Democratic primary in 2008.

“I’m the one experts have written off,” Wells said.

Wells was a graduate assistant coach for the Gamecock football team from 1997-2000, and joined the Army National Guard in 2006. He now serves as the United States ambassador for the International Human Rights Peace Commission.

“You deserve a president who is strong to stand up to Mr. Trump,” Wells said.

Wells' economic master plan, called “eaglenomics,” seeks to take “the best from the Left Wing and the Right Wing” to find a solution to many of America’s problems.

Several other policies in Wells’ platform are unorthodox for a Democrat in 2019, including wanting to train and arm unemployed veterans to act as guards for schools in America to curb school shootings. As far as abortion, Wells is admittedly pro-life, and said in his meeting with students that he wanted to “find common ground” on the abortion issue.

“We need to get to the point where we value human life,” Wells said.

“He is very much a dark horse in a race of many dark horses,” Matthew Slaughter, a fourth-year political science student from Spartanburg, said. “I am interested in his history with the Constitution party, for one thing, which was, as a candidate, was concerning."

However, these same differences are generating curiosity among students.

Maggie Gordon, a first-year biochemistry and molecular biology student from Knoxville, Tennessee, said she wants to learn about as many candidates as possible before 2020.

“What interested me about his campaign was that it wasn’t necessarily like all of the frontrunners, and so that’s why I wanted to learn more about it,” Gordon said.

Following Wells, Julian Castro held his own town hall meeting in the Russell House Ballroom. The only visiting candidate to qualify for last Thursday’s Democratic debate, Castro grabbed headlines over the weekend for his treatment of Joe Biden on the debate stage and more recent calls for the impeachment of Supreme Court Justice Brett Kavanaugh.

Before the event, Castro met individually with members of College Democrats and local Democratic party officials for questions and pictures before taking the stage.

Dylan Hawley, a pre-business student from Philadelphia, chatted with Castro after waiting in line.

“I like his immigration policies. What I’ve heard so far, I’m just looking to learn more about what he’s all about,” Hawley said.

Castro pitched his platform to over 50 assembled students and community members, touching on subjects such as healthcare and climate change.

“There will be life after Donald Trump,” Castro said.

The Democratic candidate stressed the need for more affordable higher education and the expansion of Medicare.

“We are here to represent the most vulnerable in society, and not forget about them,” Castro said.

Although Castro’s town hall was the most attended of the day, some students were not convinced of his intentions.

Kieran Smith, a third-year history and political science student from the United Kingdom, was fond of Castro both as a candidate and in his personability, but still had reservations about his seriousness in the race.

“In my perception, his real goal is not to run for president, it’s to raise his profile to maybe potentially get a vice presidential job or something similar,” Smith said.

Other attendees felt that the questioning session fell short, considering the relatively small crowd. Kim Baker, a reproductive rights advocate in Columbia, was unable to ask her question despite having her hand up almost during the entire session

“I wanted to call his attention to reproductive rights and how they are being curtailed by the states,” Baker said.

Mayor Bill de Blasio, the last visiting candidate, arrived on stage shortly after Castro’s departure. De Blasio’s brief speech hinged on his accomplishments as mayor in New York City, such as giving universal pre-K to over 70,000 schoolchildren and stopping the city’s controversial “Stop and Frisk” policy. He also stressed the need for radical change in order to protect the environment.

“I’m very much for the Green New Deal and I fear Democrats do not know the danger we are in,” de Blasio said.

Despite being largely in line with progressive policy ideas, one program de Blasio stands for is his “robot tax,” which would have companies pay additional taxes if they move to automation. The taxes collected would then go to retraining workers whose jobs were automated.

“The robot tax makes corporations accountable for their actions,” de Blasio said after explaining his proposal.

Jonathan Brown, a student at USC, started the session by accusing de Blasio of misconduct in the Eric Garner case.

“You let a murderer walk free for five years,” Brown said, referring to the police officer who killed Garner.

De Blasio responded by admitting that he should not have let the federal government handle the case, but also asserted that Brown did not have all the facts.

Later in the session, de Blasio was asked how he will handle gun violence in America if elected president, and he responded by saying he wanted to mobilize the American population to fight for gun legislation. When asked for a more specific plan, the mayor responded, “Those things I just said.”

Before he left, Mayor de Blasio met with each member of the audience for pictures and took the time to answer several questions in detail. Elaine Cooper, a Democrat and self-described “political junkie,” originally did not like de Blasio but says she has changed her mind about the New York mayor.

“Since the debates, I watched him on the debates, and I was impressed, and I’ve been further impressed with that,” Cooper said.“Every single one of our Democratic candidates are great, awesome, every single one has baggage, and I liked how he responded to his particular baggage."

De Blasio had good things to say about the USC campus and the university’s politically active students.

“I think we're at a moment where there's potential for profound change in this country, but it will have to be fueled largely through youth activism," De Blasio said. "This is a place where I’m seeing that play out in a good way."