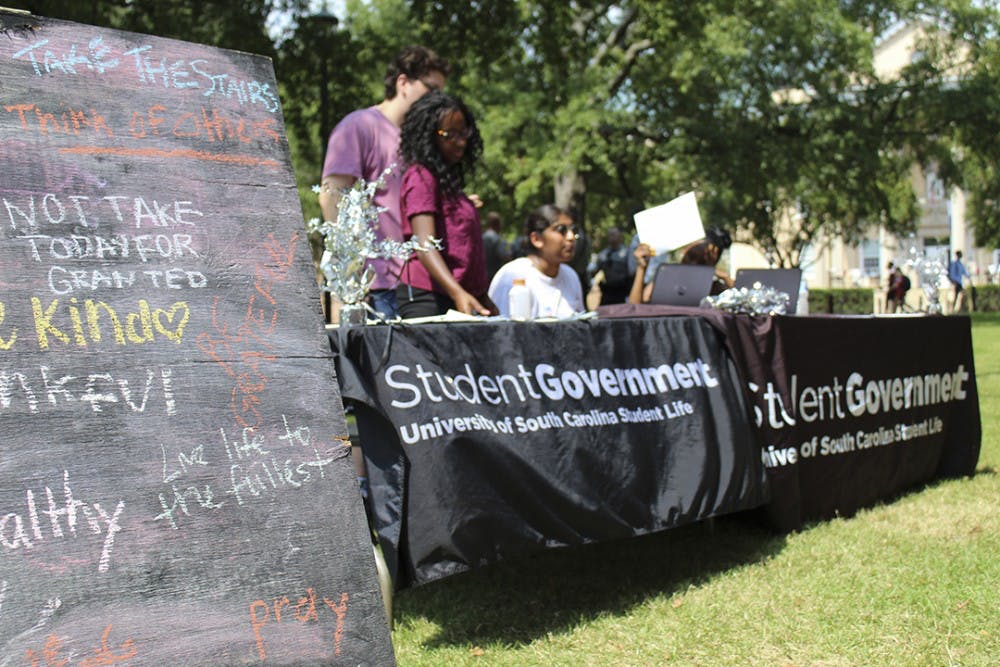 Student Government held its 9/11 memorial event on Davis Field Wednesday. At the event, students could write cards to local first responders and active military thanking them for their service, write pledges on a chalkboard to those who lost their lives, sign up to donate blood and chat with police officers.

Student Body President Luke Rankin organized the event, as it was an initiative he discussed in his campaign for his position last spring. Rankin said he wanted to remind students of the tragedy 18 years ago, since a majority of students were either small children or not yet born.

"I want to make sure that those students that weren't alive during this tragic event in our country's history also remember the day and what its significance is for students and for Americans," Rankin said.

Rankin originally planned to hold the event at Williams-Brice Stadium. However, he said his request to have it in Williams-Brice was rejected because the Beyoncé and Jay-Z concert damaged the football field prior to a home game last fall. The venue would not work because of the Alabama Crimson Tide match this Saturday.

Zykuria Zimmerman, a fourth-year biology student, said she wrote a pledge because it's easy for college students to get lost in their school schedules, so being a part of this event allowed her to reflect. Although she was young when the attacks on 9/11 occurred, Zimmerman said it's important to keep in the back of the minds of students.

"Just to donate some time out of your busy schedule just to pay homage to the people that served, the people that were affected by 9/11, even the families, and just realize how that impacts your daily life and use that kind of as a lesson to live in the moment," Zimmerman said.

Nicolo Margiono, a first-year mechanical engineering student, said he wrote a note to local first responders and active military because he wanted to remind himself of what they do for local communities and Americans as a whole. Margiono said college students should look to how Americans responded to 9/11 as an example to strive for.

"It's important because how that generation responded to it, is what we should be living up to," Margiono said. "That goal of unity and perseverance to our nation, that's something that all of us as students should be working towards."

Rankin said he wanted this event to be bigger than it was, but he said he hopes it sets the groundwork for future 9/11 events on campus.