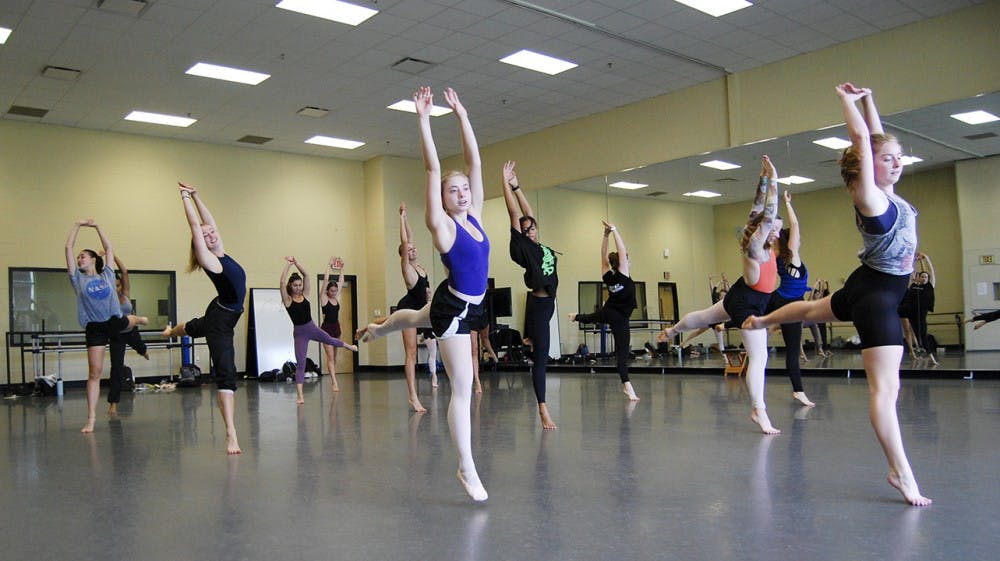 There will be a performance of Michel Fokine’s one-act ballet, “Les Sylphides,” restaged by one of USC’s associate professors in the dance program, Jennifer Deckert. The show will also consist of original pieces by two Dance Company employees, Olivia Waldrop and André Megerdichian, and a ballet piece from guest choreographer Addison Ector. All of the pieces performed this weekend have been designed to contrast yet complement each other.

“Each piece has a completely different flavor and sense about it,” said Megerdichian, assistant professor of dance.

Megerdichian said his modern dance piece, "Warm Hearts and Hot Feet," was inspired by the pioneers of modern dance that first explored the possibilities of the human body and the potential of movement.

“I just thought, what would happen if Martha Graham, José Limón, Bob Fosse, Gene Kelly and Gwen Verdon were all hanging out in a bar and, you know, talking about movement and listening to music and sort of maybe teasing each other about how the others danced,” Megerdichian said. “This piece is a slight departure from what I normally do, but I just had this image of these people.”

The USC Dance Company strives to embrace a wide range of dance performances. Since being founded in 1976, the USC dance program has become nationally accredited by the National Association of Schools of Dance.

The dance program attracts students from all over the country who are very serious about their craft. It is no easy feat being involved in the program, which requires students to be in the studio dancing for three to six hours daily on top of taking the required courses for their degrees and participating in any extracurricular activities.

One student in the dance program knows all about having to balance her life. Sophia Estabrooks is in her second year at USC and is double majoring in dance performance and Russian. Estabrooks has been dancing her whole life, but she started dancing in a pre-professional setting around 10 years ago.

Estabrooks will be dancing in “Les Sylphides” during the concert and said she is excited to see the end results of the hard work everyone has put it in.

“Training for this concert has been both intense and rewarding,” Estabrooks said in an email interview. “We rehearse frequently and the piece requires a different sort of stamina, but the end result is a beautiful, blissful work.”

Out of the roughly 70 dancers in the program, about 40 will be performing in the fall concert. After a three-day audition equaling approximately six hours, students were chosen based off of not only what was best for the dance itself but also what was best for those students in order to help them excel, according to Megerdichian.

When asked about what students should be expecting from the performance, Estabrooks quoted one of the choreographers of the concert who said the performance is a “journey from the sublime to the ridiculous.”

The first show will start at 7:30 p.m. on Nov. 1, and the second show begins at 2 p.m. on Nov. 2. USC students can purchase tickets to either show for $15, faculty can attend for $20 and tickets will be sold to the general public for $22. For more information on the upcoming performance, visit the Department of Theatre and Dance's website.