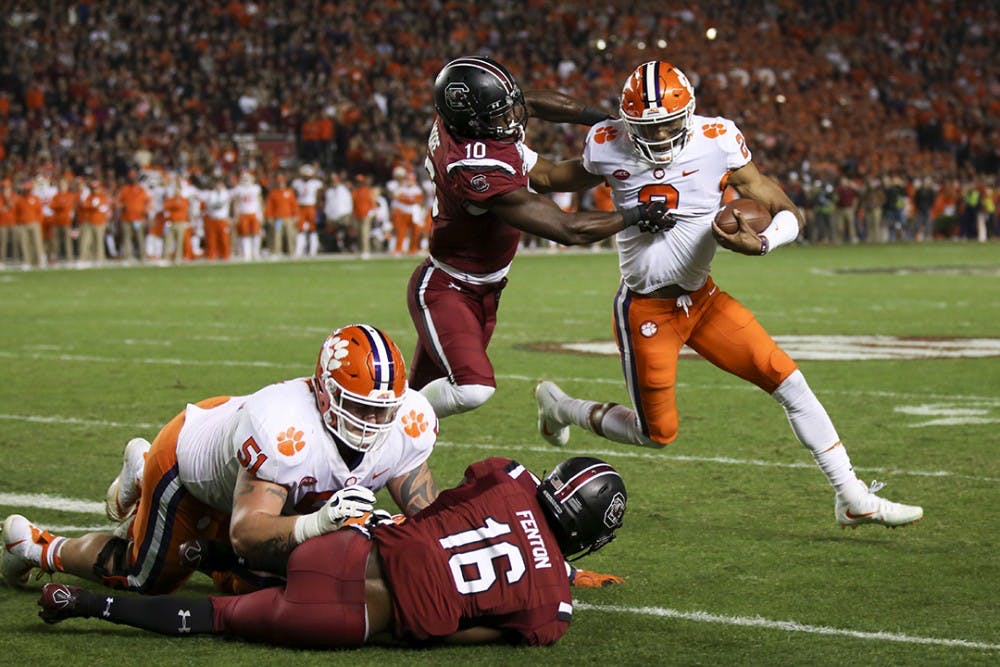 It seems as though Clemson has made beating South Carolina somewhat of a Thanksgiving tradition. Clemson fans eat turkey on Thursday, go shopping on Friday and watch the Tigers kick the ever-living crap out of the Gamecocks on Saturday. Nothing gets Tiger fans in the holiday spirit quite like an annual beatdown of everyone’s University of Second Choice.

The only bad part about playing the Gamecocks is that every other year, the Tigers have to travel to Columbia to play at good ol’ Willy B, aka the Upside-Down Cockroach. There is truly nothing worse than the deafening chicken screech that is played over the loudspeaker after seemingly every play. It would be one thing if you could win games at home, but when you’ve lost three already this year, the rally cry feels more like a death shriek, especially when you wave those white towels of surrender around before the game even kicks off.

Perhaps even worse is watching the Gamecocks run out to a song from a movie baby boomers grew up on. Like, seriously, it’s 2019. Surely you could think of a more creative entrance than smoke and the theme song from a 1960s movie soundtrack (although that’s when you last won any kind of championship, so we understand the significance behind it).

Hey, we almost forgot to congratulate you. Your 21-point loss to us last season was the smallest point differential since 2015! In fact, we beat you by fewer points than we beat Alabama. That was in the national championship game, by the way, but we wouldn’t expect you guys to know anything about that. Even in the height of your success, the closest you ever got to a national title appearance was... the Capital One Bowl. Or was it the Outback Bowl? We certainly appreciate all those free bloomin’ onions you’ve won for us!

You know, you almost had us worried when you beat Georgia earlier this season. We’ll admit, we were impressed! Although neither one of you have won anything significant since the '80s, we always appreciate watching two average SEC teams slug it out. Unfortunately, it seems as though your true colors have come through in recent weeks. I mean, losing to App State at home? And losing to Missouri and Tennessee? Geez, that "SEC grind" is no joke!

We’ve been meaning to ask, what’s going on with your head coach? It seems like everyone in Columbia wants him fired, perhaps even the athletic director. Sticky situation, we know. We can’t exactly blame you, given it’s nearly impossible to talk a respected, successful coach into coming to the Armpit of the South. However, it seems like a $4.4 million annual salary for a coach that has only once surpassed 10 wins in a season was a bit of an oversight. But hey, oversights are fitting for a team that has a chicken for a mascot.

We do sincerely hope you figure things out, though. While it is fun to rack up 50+ points on you almost every season, admittedly it’s just not the same when you’re losing to everyone else as well. As your older brother, we want to see you succeed against everyone. Yes, we’ll have to put you in your place when you come up against us, but that’s what big brothers are for!

Although we poke fun, we do hope for a respectful showing from both the players and fans next weekend. While the Tigers and the Gamecocks don’t have much common ground, everyone can get behind representing their respective universities and the state of South Carolina positively.

We’ll see you next Saturday.