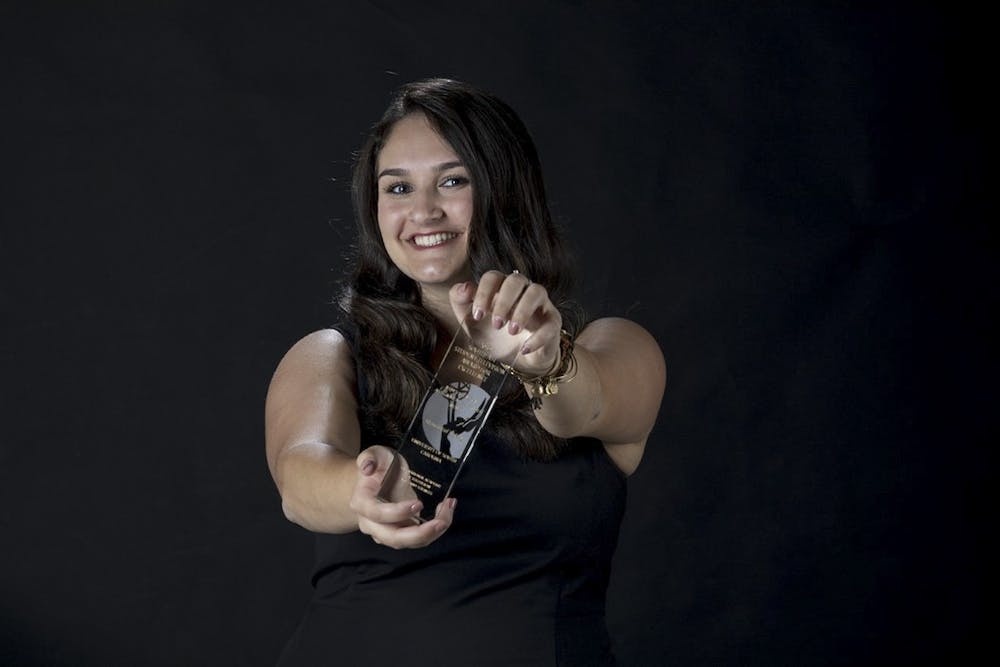 Fourth-year broadcast journalism student Elena Barilla knew she wanted to be a journalist when she dissected a cat in 10th grade anatomy and hated every minute of it.

"It was the grossest thing that's ever happened in my entire life," Barilla said. "I was like, 'Nope!' It was a house cat. We had to skin a domesticated cat ... I was like, 'Oh my gosh, no, I’m definitely meant to be a journalism major.'"

This decision led Barilla to win the D. Haney Howell Student Journalist of the Year award at the 2019 Radio Television Digital News Association of the Carolinas for her work as a journalist at USC.

“I like to tell the story that nobody else is telling. I think that it’s really easy to go to the State Fair and do a story about, ‘Look at all these rides, and look at all this food, and look at how much fun everyone is having,’” Barilla said. “But for me, when I go to the State Fair, I’m looking for that one person whose story can be representative of the bigger picture.”

When Barilla began at USC, she joined SGTV and worked her way up to associate producer for the weekend news and, later, executive producer. She said she used that experience to get her "foot in the door" for internships. From there, she interned at WIS, Seacrest studios in Charlotte, CBS with the show Inside Edition in New York City and ABC's show The View.

Barilla said she was a fan of the news growing up the way other people are sports fans. She began to find herself pulled more and more into that realm as time went on.

“I grew up right outside of New York City, on Long Island, and I guess I would always watch Good Morning America with my parents,” Barilla said. “I would always go into the city and we’d go to Time Square and see ABC right in Times Square.”

Rick Peterson currently teaches Barilla in her capstone-level journalism class, referred to as senior semester by journalism students and faculty. He said she finds the stories no one else can.

“What impresses me about her reporting is, so often she comes up with great enterprise story ideas. So, stuff that you wouldn't typically see in the news,” Peterson said. “She's just always out there, contacting people, looking for something unique, something going on that she thinks would be really interesting.”

Barilla said she applied for 55 internships in New York City and didn't get one, but the only internship she applied to in South Carolina, she got.

“When I was a kid, I just knew that I liked talking to people, and I liked talking a lot. And then, I guess in middle school, high school, I started editing my own videos, and then we had a high school radio station and I was a DJ and honor personality for that," Barilla said. “So kind of just my whole life I never really thought about doing anything else.”

“[Barilla]'s been always really committed. She is a bubbly person, she has a lot of energy and enthusiasm for what she does, and it’s infectious, too, and I think that she's really willing to share what she understands about how things work with the people she works with,” Smith said.

The first thing that came to Barilla’s mind when she discovered she was up for journalist of the year was her family, who she credits with fostering her passion for journalism and supporting her.

According to Barilla, you have to love journalism if you want to stick around.

This passion is what keeps Barilla going, even with some of the challenges that she’s encountered in the profession.

“Long work hours, your first job you could be working overnight, there’s a chance I could be nocturnal in a few months,” Barilla said. “Miss a lot of holidays, which makes me sad. But if, at the end of the day, if you love it, then you’ll have no regrets doing that. So, yeah. If you love it, you do it.”