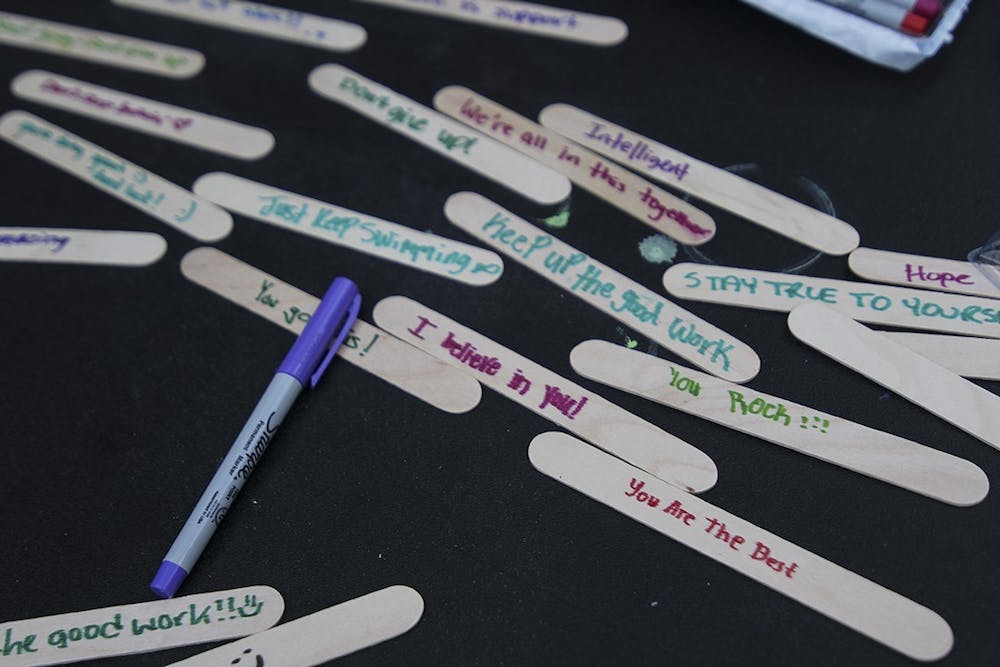 Cook, 37, social work student and veteran wrote "just quit" on his stereotype popsicle stick that he broke on stage and "keep your integrity" on his larger popsicle stick, which he added to the mural paper. Cook said it was difficult for him as a veteran first-generation college student and said he's often asked by family members to return home and start over, but he refuses to quit.

Mallory Stanley, first-year biology and pre-medical student, said she grew up with her mother and without a father and had been treated as if she wasn't worthy for college. Stanley wrote "unworthy" on her stereotype popsicle stick, which she broke in half on stage and "you belong" on her larger popsicle stick.

Stanley said "it was very empowering," when she took stage, gave her speech and broke her stereotype popsicle. Stanley said she's gotten involved in six student organizations, plans to apply to become an RM and wants to study abroad.

Stanley said in her senior year of high school she drifted away from friends and had trouble balancing school work and personal issues. Stanley also said she was being discouraged and doubted by one of her high school teachers and she began believing that she was never going to attend college.

"I didn't want her to be the deciding factor," Stanley said. "So that's when I decided that I was going to keep my hopes high and that's when I got my acceptance to USC and I was really surprised."

Lyric Swinton, fourth-year sport and entertainment management student, wrote "don't have enough to succeed" on her popsicle stick because she said she often compares herself to others and that sometimes it makes her feel as if she can't achieve as much as other.

"You have exactly everything that you need, and you're exactly where you're supposed to be," Swinton said. Swinton said she attributes her success to hard work and her willingness to achieve what she wants. She wrote "you are worthy" on her larger popsicle stick, and Swinton told the crowd they were worthy to be in college and were not lucky.

"Just some encouragement to keep going and you know, that you're not alone," Ashley Bailey-Taylor said.

Bailey-Taylor, assistant director for Gamecock Guarantee Program in the Office of Student Financial Aid and Scholarships, organized the event. While she is not a first-generation student, she said she found her passion through her belief that higher education should be available to everyone.

Bailey-Taylor said in her experience with first-generation students, she's heard them claim they're uneducated, underprepared or not financially wealthy, but she sees those as a positive impact on them.

"That's kind of what makes them great, because they are very resilient, they have a lot of determination," Bailey-Taylor said. "They're already leaders because they came to college, they're the first one in their immediate families to come to college."

Athlea Counts, director of the TRIO program at USC which helps first-generation college students succeed at university, has worked with the program for 23 years and as a first-generation student herself, she said the transition is difficult.

Counts said she has met many first-generation students in the past, helped them through their college experience and seen them go on to be successful. Counts saw herself in many of these students, and that's what fueled her passion to join TRIO, she said.

"I'm just really proud that the university is committed, you know, to make sure that first generation students have the opportunity and know that they can be successful here as well," Counts said.