Column: Gamecock basketball needs face in NBA, Chris Silva is not it 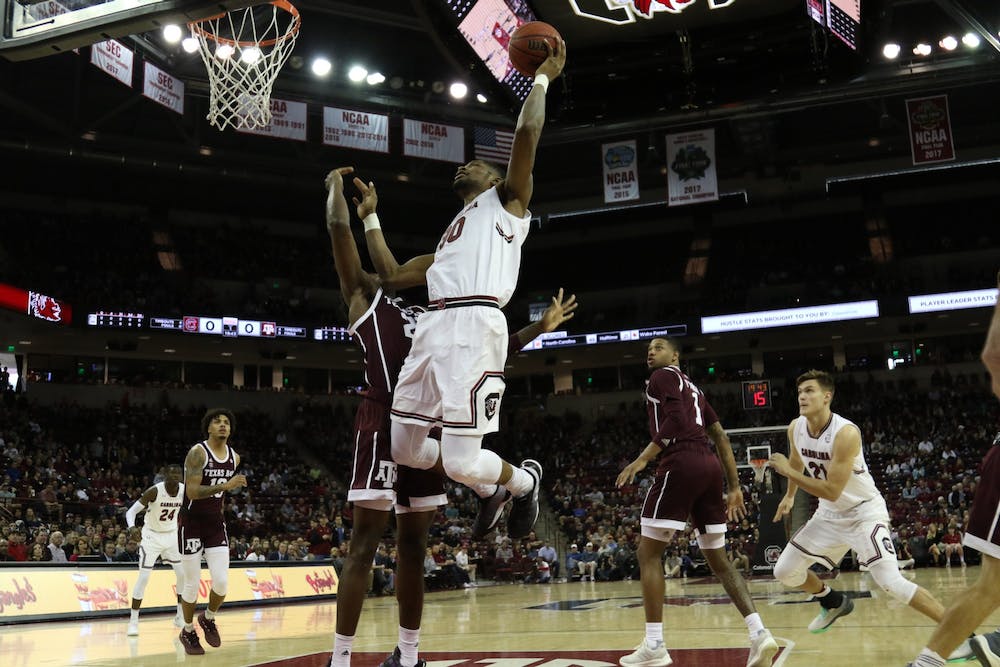 Departures to the NBA by Sindarious Thornwell and P.J. Dozier in the following years paved the way for Silva to lead the Gamecocks in the 2018-2019 season.

With Silva at the helm, the Gamecocks finished the 2018-2019 season at an even .500 (16-16) and lost in the first round of the SEC tournament. The regular season effort found the Gamecocks without an invitation to the March Madness tournament.

Silva declared for the NBA draft following the season and went undrafted. However, he did sign a two-way contract with the Miami Heat that allows him to split time between the Heat and their G-League affiliate team as long as he is under this deal.

In Silva's first career game, he ended with eight points, six rebounds and three blocks against the Memphis Grizzlies. Despite this performance, he only notched a minute of playing time in the Heat's second game of the season.

While he did have a flashy block against fellow rookie Ja Morant and an impressive summer league, it will take much more convincing from Silva for me to believe he will have any long-term future in the NBA.

This is not because of my belief in Silva's abilities. He is extremely talented. Watching him play as a young gun fighting for his spot on the Final Four team, I thought he had a bright future ahead of him.

Unfortunately for Gamecock fans, Silva hasn't had that fire since. In fact, if I had to describe Silva's game with one word, I would pick lazy.

Watching him from the stands his senior season, he looked at times as though he would rather be anywhere but Colonial Life Arena. I have not seen such a high level talent not run up the court for a fast break or give up on the play as much as I witnessed from the Gamecock senior.

Hustle was not part of Silva's game. He simply relied on his height to put up the majority of his points.

Though he was listed as a forward, Silva played center for the Gamecocks, but he has converted to shooting guard in the NBA due to his 6-foot-9 frame. Silva will have to completely change his game.

His 3-pointer is very new to his game, as 46 of his 59 NCAA attempted threes came in his senior season. The NBA 3-point line also moves back over an inch and a half on the court, taking it from 22 feet, 1 1/2 inches in the NCAA to 23 feet, 9 inches in the NBA.

The change is only a few feet, but many players are unable to make the adjustment and 3-point percentages drop.

Though Silva shot consistently, he never developed his 3-pointer as a consistent weapon in college. The increase in distance will only make it more difficult for him to develop the shot as a consistent threat in the NBA. His lack of experience from behind the arch in a league where the 3-pointer's value is at an all-time high does not give me any reason to get my hopes up.

Silva's performance, in both preseason and regular season NBA action, has been impressive, but I have learned from past experience not to buy into the Silva hype train.

I wish all the best to Chris Silva, and I hope I am wrong, both for his sake and for the future of Gamecock basketball.

The team had a solid freshman class last season, featuring the likes of AJ Lawson and Keyshawn Bryant, but to get back to a Final Four head coach Frank Martin is going to need to bring in more talent via the recruiting trail.

No recruiting pitch is better than a star pro athlete who came through your program.

Martin needs this weapon to use on the recruiting trail, especially after losing out on in-state five star recruits Zion Williamson and Josiah James the past two seasons.

Neither Thornwell nor Dozier have shown any signs of becoming that iconic alumnus and Silva has given me very little reason to believe he can become that player.

Gamecock men's basketball has been historically mediocre, and the NBA career of Chris Silva will be no different.