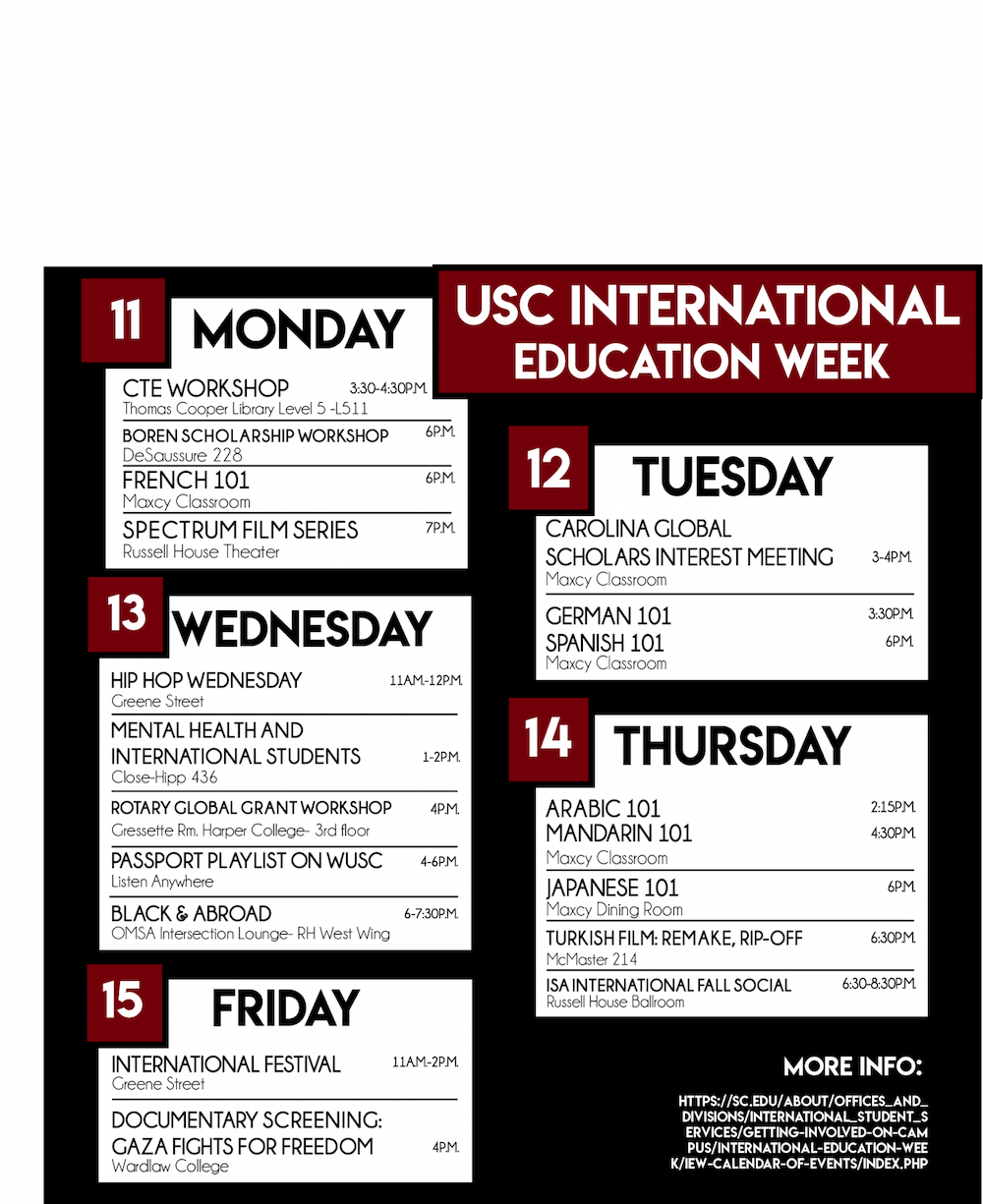 Entering its 15th year, USC’s International Education Week (IEW) will run from Nov. 11 to 15 and seeks to promote international exchange.

Julie Medlin, the internationalization programming coordinator and IEW Committee chair, said USC's aim is to "give international students and American students an opportunity to learn about each other."

Terry Goodfellow, curriculum and community outreach coordinator, said it is often difficult for domestic students to start a conversation with international ones because they don’t know how to initiate it. IEW creates a space for people to meet others they may not interact with normally.

Medlin said she hopes students will learn something new about another country or culture. Additionally, she wants American students to recognize they too have culture that should be appreciated and shared.

“People who haven’t traveled outside of their hometown don’t realize that they have a culture, and I want people to embrace who they are and where they’ve come from,” Medlin said, describing international education as a “two-way street.”

Medlin said she believes studying abroad helps us learn about ourselves and others' cultures. She said that while not every USC student will be able to study abroad, one doesn’t have to travel to have an international experience because there are 2,000 international students on campus.

“I want International Education Week to be like a mini study abroad experience,” Medlin said.

Every culture possesses its own strengths, Goodfellow said, and there is much to be learned from people of other cultures and origins.

“I feel so privileged to be able to be in the classroom with [international students]. I learn something new every day,” said Goodfellow, who is also an English Programs for Internationals (EPI) instructor.

The IEW Committee partners with other offices and USC student groups who plan events for the week.

One of IEW's events is the viewing of Turkish film "Remake, Remix, Rip-Off" about copy culture on Nov. 14, and it will be followed by a Skype Q&A with the director.

International Education Week provides the opportunity to recognize the strength of the international community on campus. It is a massive feat to study in a second language, something American students might take for granted, Goodfellow said.

“I don’t think that USC students really appreciate, often, the effort that those students have to put in to sit next to them in the classroom,” she said.

International Education Week is also bringing back the International Students Association (ISA) International Social. ISA is comprised of students from any culture or country, including those born in the U.S. but whose parents are from another country. The event will include international food and anybody who would like to teach a dance may do so.

The week culminates in the International Festival hosted on Greene Street Friday. The festival boasts an array of dancing, performances and foods. EPI has a large presence at the festival and will be presenting its cultures with decorated poster boards. Many of the university’s international student organizations will also be in attendance.

Medlin said the festival will include the Chinese dragon, panda suits and a kung fu exhibition. International music will be heard throughout the festival, and WUSC’s passport DJ is set to make an appearance.

“For the [international] students, the highlight of that festival is someone just stops at their table and asks them a question,” Goodfellow said. “They are so proud to represent their country.”