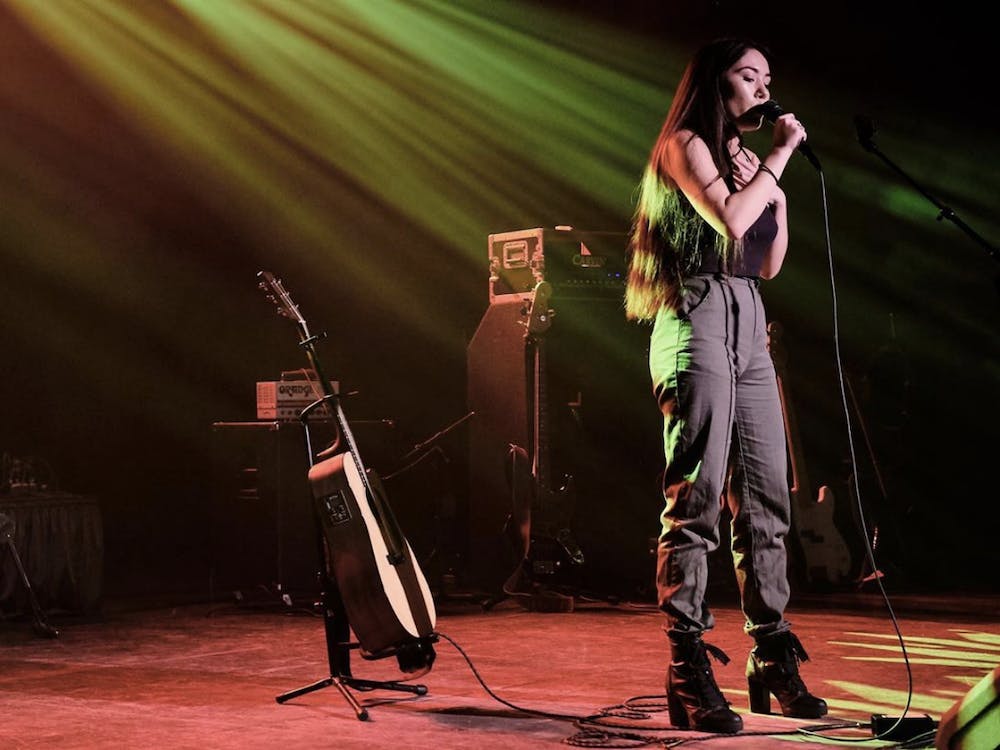 Kate Vera strummed an acoustic guitar as she sings the opening lines of alt-J’s “Breezeblocks.” People in the W XYZ Bar & Lounge at Aloft Columbia Downtown hotel watched as she began her three-hour set.

“‘She may contain the urge to run away, but I hold her down with soggy clothes and breezeblocks,’” Vera sang.

The third-year public health student has been playing gigs since she was 13.

She said she has had one dream, “for forever,” to be famous for her music.

A week earlier, Vera sat in a dimly lit coffee shop remembering the first time she sang for an audience.

“It was the Chapin Elementary talent show. I was in fourth grade,” Vera said. “I played ‘Kiss Me’ by Sixpence None The Richer. So innocent.”

These days she covers anything from “New Rules” by Dua Lipa to “Jolene” by Dolly Parton.

When she’s not on stage, Vera goes by her birth name, Emma Kate Smalley. Over the years, the singer changed her artist name to match the genre of music she released before settling on Kate Vera.

The dark-haired, blue-eyed girl spent most of her childhood in Chapin, South Carolina, learning how to sing and play guitar from her dad, Bruce Smalley, who is the chief information security officer for SLED.

“All of her cousins were cheerleaders, and the selfish side of me didn’t want her to be a cheerleader,” Smalley said. “So I bought her a guitar early.”

It wasn’t until Vera found her dad’s songwriting notebook that her own lyrics began to flow. Her dad mistook the first song she wrote at age 12 as a Taylor Swift song.

“That’s when I realized that she’s probably got some talent for songwriting,” Smalley said.

She released her first EP, titled "Out of Nowhere," at age 13, and her second, "Almost a Whisper," at 17. Her early music leaned towards an ambiguous country sound, one Vera didn’t find intentionally.

She was introduced to her current producer, Cory Plaugh, in 2016 at the Charleston Music Confab, a music conference for artists and industry professionals. The two released her first pop single, “Yes” in August 2019.

Vera records her music at Plaugh’s in-home studio — a brick-walled room to the left of the kitchen. "Star Wars" figurines and family photos surround the production equipment.

“My initial impression of Kate Vera was that she had a really emotive voice and had written songs on a level that was way beyond her age,” Plaugh said. “She has the most potential I’ve seen in a long time.”

Plaugh became a family friend and even played drums at one of Vera’s gigs last year. The two are planning to release an album in the next few months.

Straying away from her semi-country roots, Vera said she wants to add more pop songs to her discography. As she’s matured, her message has changed from love and heartbreak to female empowerment.

Vera’s dad helps with lyrics and melodies sometimes, although he’s not as involved as he was in her early years. Vera said it wasn’t always easy to collaborate when she was a teenager.

“When I was going through the teenage hormones at 15, and my dad was practicing with me all the time, we would get in a lot of arguments,” Vera said. “It’s just because it was a lot of pressure, but in a good way."

Vera said she’s glad she stuck with music, even through the hard times. Her goal is to “make it big.” She only chose to study public health at USC as a backup plan.

Vera said her parents have told her she could give up college to pursue music full time. Knowing how hard the music industry is, the third-year student plans to complete her degree despite the emotional challenge.

“It’s hard for me to stay motivated, because public health isn’t my number one goal,” Vera said. “I just want people to know my music. That’s what making it big is for me. People know the music and being able to connect with it.”

Vera closed her set at Aloft Columbia Downtown with “Crazy” by Gnarls Barkley.

Her voice was a little tired; her tip jar was a little fuller. Her mom, Vera’s “No.1 fan,” listened with admiration. From talent shows to hotel gigs, Vera’s parents have unwavering support for their daughter.

At the end of the day, she’s a young college student living somewhere between a difficult dream and a reasonable reality. For now, she’ll keep hoping the stars will align, moving forward one song at a time.