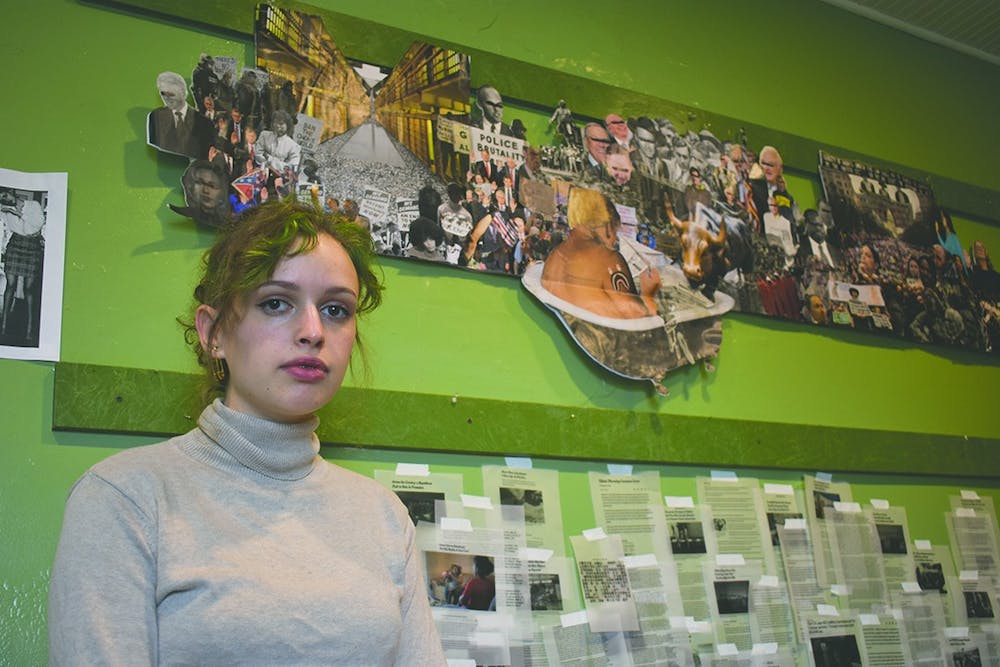 Inside Cool Beans coffee shop, there's a collage with images of iconic politicians and protesters stretching across an entire wall on the second floor near the counter. Sophie Angela, a fourth-year arts education student, is the brains behind the artwork.

She said one of the main goals of her political collage is to get people to read into the artwork and start a conversation about what it means to them.

“I want people to notice what they don’t recognize and why they might not recognize certain things,” Angela said.

Recognizable figures, such as hype brand logos, are placed throughout the piece in an effort to make people question why they easily recognize these logos but not the political faces. If this is the case, Angela wants the viewers to stop and ask themselves what this means.

“Her work is thoughtful, exploratory and bold,” Sara Schneckloth, Angela's first-year drawing professor, said in an email. “She weaves together history and the present moment and encourages a viewer to reflect on the complexities of our time.”

Angela said the collage includes article clippings from United Nations documents that contain politically unbiased information that is important for people to know in order to know more about what is going on in the United States. She said she believes it is important for her viewers to look closely and take the time to find those articles.

Angela first applied to have her art showcased at Cool Beans more than a year ago. It was not until this semester, when she returned from her exchange in France, that she received a text from the Cool Beans' manager stating that a couple of artists had moved and there was an opening available for her. Angela had two weeks to create and hang her artwork on the first and second floors of the coffee shop, and now her artwork is being showcased in the long term and sold for the first time.

Despite the style of her political collage, watercolor is Angela’s main medium when it comes to creating art. While sitting down with Angela, she was working on the finishing touches of multiple watercolor prints. She said she plans to sell the prints while her artwork is displayed in Cool Beans.

“I’m into reproducible art and accessible art, making it cheap enough and wide-scale enough that people can actually afford it and have art in their homes, or dorms in this case,” Angela said.

Angela said that she finds it important to make art available for everyone, and it should not be something strictly for elitists. Another goal of hers is to branch art out into the community. She said she thinks the best way to do this is to expose students to art, but not just the mainstream artwork everyone knows about.

“Art is all around us, including the clothing we wear and the stickers we put on our cars and on our laptops,” Angela said. “If [students] can recognize this, and at least have an appreciation for it even if they don't create art, that will spread it into the community.”

With her art education degree, Angela said she is planning to teach in South Carolina’s public schools at the high school level for at least the next four years.