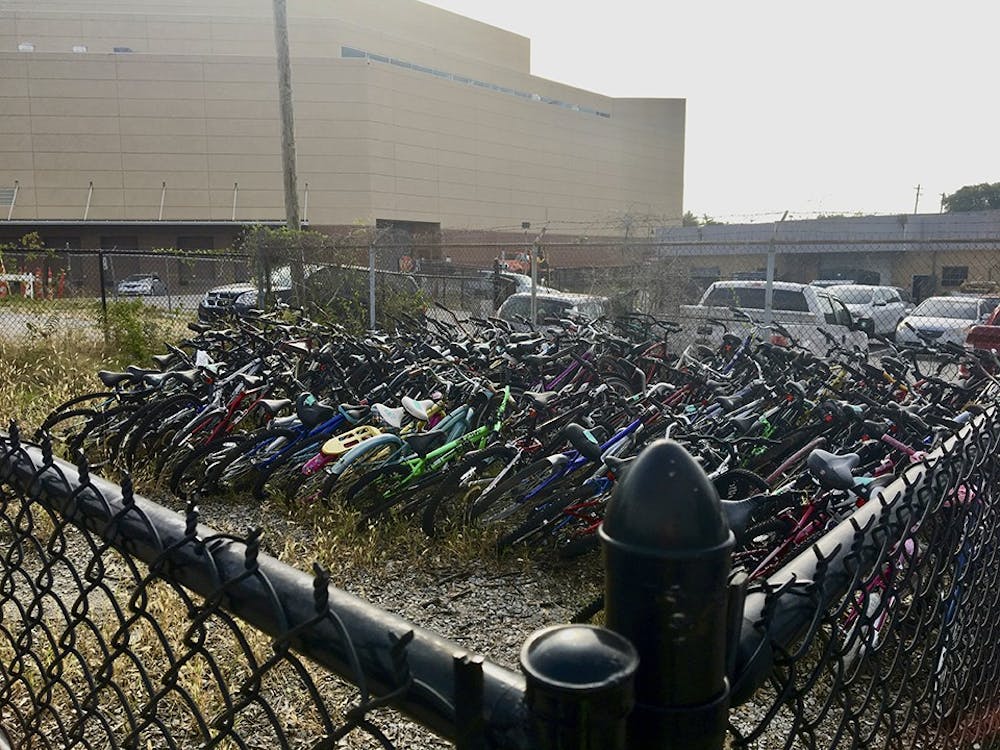 Seventy-seven bikes were removed in August from bike racks by vehicle management after they were tagged a few months prior. Now, they are sitting in an enclosed fence behind Colonial Life Arena and, if not claimed by early December, will be thrown away or donated.

Sophia Storlazzi, a third-year public health student, said her biggest concern is that removed bikes owners' might believe them to be stolen. She said the lack of understanding on how the collection process works is frustrating.

"The issue with that is, there is nothing online that says, 'Contact this person if you want your bike back,'" Storlazzi said.

Storlazzi spearheaded the efforts in April to tag abandoned bikes with green stickers awaiting their removal. However, the removal process didn't take place until August, giving the stickers time to wear off, fade or become unrecognizable, she said.

In an email interview, USC spokesperson Jeff Stensland said USC doesn't believe there was an issue with fallen tags and that any bike remaining in a rack in the first week of August was considered abandoned.

Storlazzi is working with the facilities department to add another 100 bike racks to campus, an initiative she started in April. However, Storlazzi said another 1,000 bike racks are needed to bring USC up to par with other bike-friendly college campuses of similar size.

Stensland said this year USC has $30,000 set aside for the purchase and installation of those 100 bike racks, and the goal is to ultimately raise the number of racks to 2,000. USC currently has 800 bike racks on its Columbia campus, Stensland said.

At the conclusion of the 120 days, any remaining bikes in the storage area are considered abandoned and therefore USC will turn them over to Consolidated Services.

"The goal is to get them all donated,” Stensland said. "In the past, they have been sold via the bike shop," which is located in the Solomon Blatt PE center.

Newbill said students can call his office, and then he and the student can retrieve the bike. Students are given 120 days to reclaim their bikes, which were removed between August 9 and 11, giving them until the first week of December.

The bikes are being stored in a fenced-in area behind Colonial Life Arena, close to where maintenance trucks are stored.

"I think they ignored the tags, the green tags, and they just removed whatever bikes looked abandoned," Storlazzi said. "I'm not even sure if that follows protocol, because that's why we tagged the bikes to begin with."

Storlazzi had a meeting with the facilities department and parking services discussing the abandoned bikes and the next steps for that process and for the additional 100 bike racks. Storlazzi said they're hoping to have USCPD collect serial numbers from the abandoned bikes in the motor pool and notify owners, however Koby Padgett, administration and finance communications director said he could not confirm that.

Vehicle management services associate Richard Evans said he was just recently added to this project in the past few weeks. Evans said cyclists should register their bikes with Parking Services, so they can match serial numbers with students' bikes and return them.

“We want [students] to get them back, and it doesn't do us any good to keep them, but hopefully if they don't retrieve them, there's something good that can be done with them,“ Evans said.