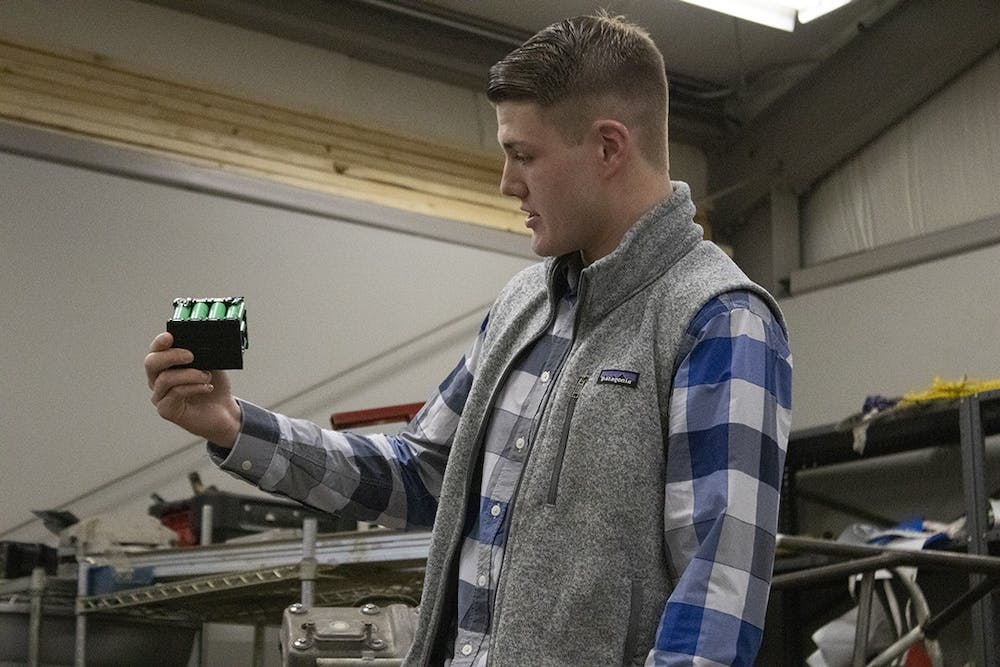 Third-year electrical engineering student Jack Hannum has a photo of Elon Musk unveiling a Tesla Roadster as the background on his laptop. Inspired by Musk and Tesla's ability to commercialize electric vehicles, Hannum said he eventually wants to work for Tesla and has applied for several positions.

Hannum also dreams of unveiling an electric car just like when Musk first presented the Tesla Roaster to the world. As a result, he created a Formula One-style car building club earlier this year. Hannum and his team plan to echo the unveiling of the Roadster when they attend the Formula SAE Lincoln, a nationwide contest of formula one cars designed and operated by college students, in June. Formula One cars are single-seat, open-cockpit racing cars.

"I'd love to one day have a moment like you have seen Elon Musk doing on my background, unveiling a Tesla Roadster and really any product on stage," Hannum said. "That would be the dream."

USC’s Society of Automotive Engineers has now been building a Formula One car for several months and intends to compete for the first time at the Formula SAE Lincoln. The competition, held in Nebraska, includes track events like acceleration, cone splitting and endurance.

There is no head-to-head racing for these cars, but rather all of the scoring points will be won in multiple tests of the cars, and the winner will take home a couple thousand dollars.

"I'm a big car nerd and I love racing; I'm a big Formula One fan," Mason Salb said. "Stuff like this is ultimately what I want to do for my career."

Salb, a member of the club and second-year mechanical engineering student, is in charge of ensuring the power generated from the motor translates into the turning of the wheels. The club as a whole has a "great energy" around it, according to Salb, with all members passionate about their jobs and wanting to prove themselves.

"Being a first-year team, you know, everybody, we want to go out there and we want to show them what we can do," Salb said.

Hannum is the president of USC's Society of Automotive Engineers club and said the focus of the club this year is efficiency because it is one of the keys to winning the endurance test. Moreover, Hannum said the club is focused on building a reliable car because the most important and rewarding competition is the endurance test, a 25-kilometer route — roughly 15.5 miles — which serves as the true test of the car. This test’s distance also determines the size of the batteries needed for the car, a critical design component.

”If you don't compete in that, you're not going to win the event. Period," Hannum said.

Hannum said the club's Tesla-inspired electronic batteries are also found in Tesla's Model S and Model X electric cars. The batteries will be placed in a bookshelf-like structure, with racks against the firewall, which separates the battery-operated engine and the driver’s seat. While the club hasn't begun constructing the car or its components, they are in the beginning stages of buying materials and building the parts. The club aims to have the car completed and ready for testing by Feb. 1.

Jacob Hodges, a member of the club and third-year mechanical engineering student, said the most difficult part of building the car is making each part fit. Hodges said it's easy to make them fit in their computer-aided design software, but translating that into the physical car is also a part of the preparation for the summer competition.

Hodges also said he initially joined the club because of his passion for welding, but his focus has shifted to making sure the club endures at USC.

"My main focus has just been making something sustainable for the university because this has been a program that they've tried a few times, and they weren't ever able to make it sustainable," Hodges said.

Hodges said he tries to make team meetings lighthearted and allows members to goof off while remaining professional. Some of the members may not be fully immersed in the automotive industry, but they have found a place to tap into their passions and work on real-life engineering, Hodges said.

"A lot of us just really like cars, even if we don't know some of the nitty gritty details, like one of our other team leads, it's still just a cool thing to be a part of," Hodges said.

While many on the team are focused on the mechanics of building a car, others are focused on the business aspect of car building. Rachel Nelson, a third-year accounting student and fundraising team leader, said as a member of the club, she's practicing money management skills from real world companies.

Nelson said the club has a few sponsors but is "still struggling a little bit, trying to get our name out there." However, Nelson said the focus on efficiency should make the project less costly, which makes her fundraising job less stressful, in turn.

Nelson said it's been hard for her to keep up with the engineering jargon as a business-minded student. Similarly, she said she's found it difficult to get business students to join the club because they see only the engineering aspects. It's unfortunate, she said, because she's enjoyed working with the team.

With teams focused on a different mission contributing to the construction of a car that must meet specific requirements, the club's work is best described by Hannum as "productive chaos."