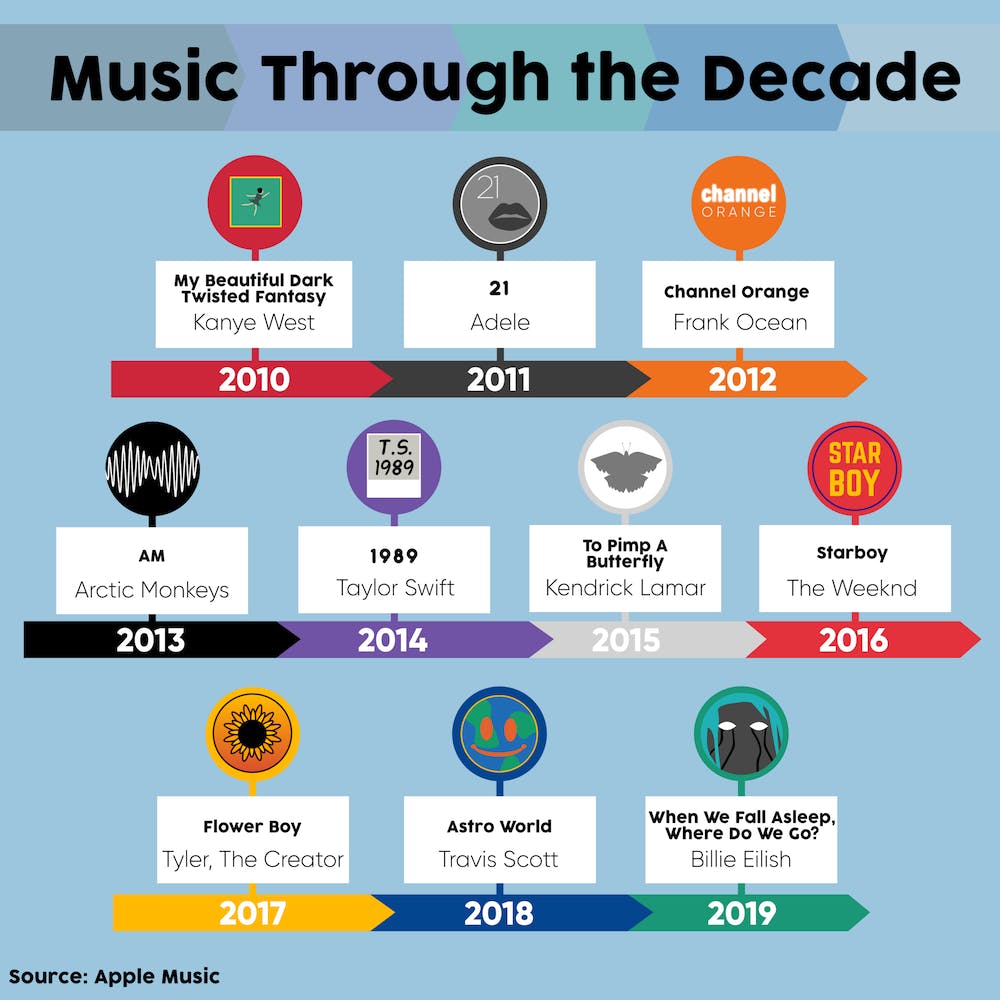 2010s left genre behind, allowed anyone to be a musical artist

Looking back at the music of the past, it can be easy to place specific musical trends in specific decades, such as the British invasion of the '60s or grunge in the '90s. When people of the future are looking back onto the 2010s, the music of the decade will be defined by the abandonment of the typical idea of genre and the rise of the "DIY" artist.

In 2010, autotune was on its way out and Kanye West was still working on "My Beautiful Dark Twisted Fantasy." From there, the music scene would shift away from genre and the idea you need a label to have a hit, culminating in Lil Nas X's "Old Town Road."

"Old Town Road" is perhaps the most recent example of genre bending and an independent release in popular music. However, it is far from an anomaly.

Artists throughout the decade have been mixing genres together to create their own unique sounds. An early example of this would be Adele, who has been mixing pop and soul since "21" in 2011.

Other examples are Frank Ocean with his neo-soul and rhythm and blues sound; XXXTentacion's mix of emo rock, trap and lo-fi sounds; the previously mentioned Lil Nas X's mix of rap with country; Beyonce's mix of R&B and country in "Daddy Lessons" and, of course, Billie Eilish's mix of goth pop and trap.

"Everything's postmodern; anybody can reference anything they want. You've got hip hop songs that are winning country music awards; you've got indie music that references anything from country to electronic music to pop," Alex McCollum, an employee at Papa Jazz Record Shoppe, said.

"You listen to that record and it sounds like anything from David Bowie to just straight up R&B and soul and blues," Jones said. "You can't put that record anywhere."

Besides genre bending, the other big movement of the decade was the rise of "DIY" artists, or artists who get their start independently.

With the internet and services such as YouTube, SoundCloud and Bandcamp, anyone can release music and gain a following.

Associate professor Ernest Wiggins in the School of Journalism and Mass Communications said Chance the Rapper was a good example of someone who built up his own brand, style, music and following without having to deal with the corporate music structure.

"You don't put a demo out and deliver it to Sony Music waiting to be affirmed by them as being the next big Taylor Swift," Wiggins said.

The idea that someone such as Clairo – whose first hit song, "Pretty Girl," was first posted on YouTube, where anyone could listen for free – was able to sign with a label and release an album only two years later was completely unheard of in decades before. In the 2010s, artists took matters into their own hands.