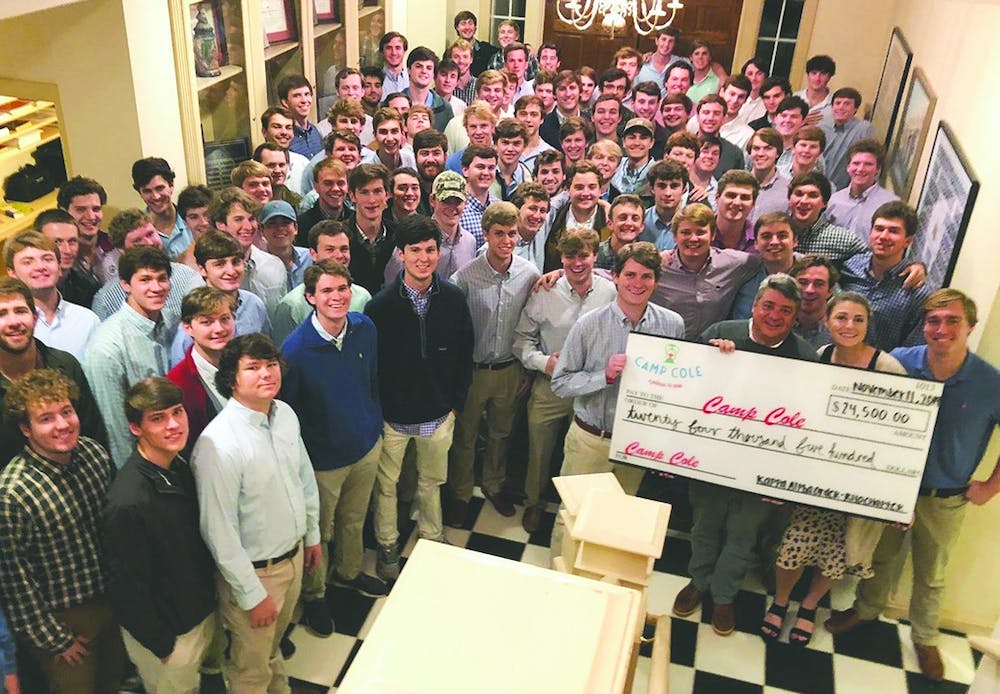 Cole Sawyer was only 11 when he lost his battle with cancer. He had spent some of his battle at CAMP KEMO, a summer camp that served as a retreat for patients undergoing serious medical issues or cancer.

It was at CAMP KEMO the idea of Camp Cole began to form for the Carters and their family friends, the Fawcetts. Kelsey Sawyer Carter, Cole’s sister, is one of the founders and serves as executive director of Camp Cole.

The Fawcetts gave 30 acres for the camp to be built off Garners Ferry Road. In order to turn this empty land into Camp Cole, funds were needed. Fundraising became their daily routine as they worked to bring the Camp to life.

One of the groups that have supported Camp Cole is the Kappa Alpha fraternity chapter of USC.

“KA first reached out to us because we just had a close relationship with many of its members. My father was a KA, we always joked about it and said Cole would have been a KA,” Carter said. “My co-founder, Margaret Deans [Fawcett] Grantz, and her family are very involved with the fraternity … and her brother is actually a KA currently.”

Kappa Alpha, in November 2019, hosted a fundraiser for Camp Cole called "Dancing With The KAs." It was a dancing competition between multiple pairs, where each went out and danced to a song of their choice. People could donate money to a pair, and the pair with the most money won. All the money given to contestants went to Camp Cole.

Fourth-year psychology student Jack Fallon is the chapter president for Kappa Alpha at USC. He said the "Dancing With The KAs" event was “one of the highlights of [his] presidency.”

“It started my freshman year, so it’s kind of been something, at least for me, that's been one of the biggest motivators for being in this fraternity, as a whole," Fallon said. "It’s just something that’s a really special way to bring everyone together every year."

“Just seeing how much it means to all the guys as a whole, too, is really cool and really special. I think the experience as a whole is, I think it's going to stick with guys for a really long time and teach them a lot,” Fallon said. “I am grateful to be able to work with such an incredible organization and for us to support them along the way.”

Third-year finance student Andrew Walker served as the philanthropy chair in Kappa Alpha while the fraternity put the event together. Walker said the members of Kappa Alpha “have no problem providing [Camp Cole] with volunteers.”

“The buy-in from our chapter is near a hundred percent," Walker said. "Hopefully, like I said, we’re going to be expanding our partnership, maybe to doing an event in the spring at some point that also raises money for them that we host."

With the funds raised, Carter said she hopes to begin construction of Camp Cole in April.

“We are really looking forward to being able to bring people together, to connect with other people who are walking in the same shoes as them. I think that’s really the nucleus and the focus of Camp Cole, is showing people that they are not alone in whatever struggles or hardship that they’re going through,” Carter said.

To bring the camp and its ideas to life, the planned accommodations range from cabins, a cafeteria and art shack, to kayaking and an "equestrian therapy program," Carter said.

"A multipurpose room, offices and conference rooms, a medical care facility," Carter said. "We'll also have a pool, a ropes course, and a pond for fishing and kayaking and all those fun activities."

Carter said she gives thanks to the "incredible" Kappa Alpha chapter and the work they’ve done to support Camp Cole.

“I can’t believe that a group that are youthful, healthy young boys cares so much and really recognize the needs of others, and I think that’s extremely profound and mature of them and I’ve just been so thrilled to be working with such a chapter,” she said.

The support Kappa Alpha brings to Camp Cole not only helps fund it, but also gives public awareness to the issue of disability access.

“It’s bringing more of the community, more assistance — more of out of the state — into knowing that our community, our citizens, the disability community, deserve a much more thought out, more suitable spaces,” Carter said.