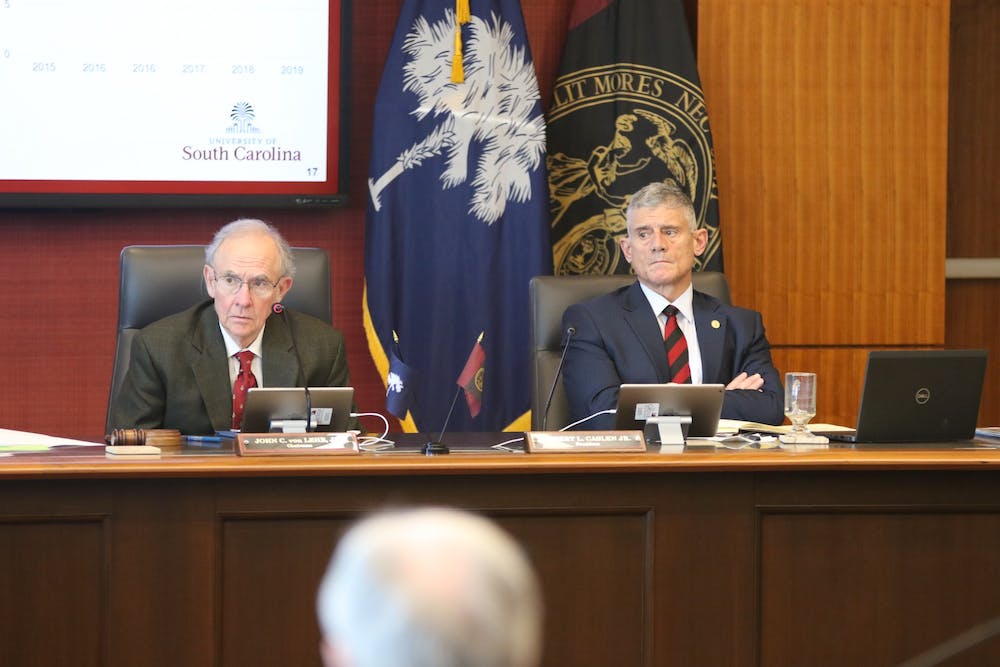 Faculty raises, strategic plans and a new health science campus are among topics USC’s board of trustees discussed on Friday.

University President Bob Caslen addressed his strategic plan for the university. One priority he said he wants to address is the university’s climate. His strategy for improvement is, essentially, “ends, ways and means.”

“Ends,” Caslen said, are goals and objectives, “ways” are programs to accomplish these goals and “means” are the fiscal realities behind this vision. The President’s Initiative Fund will pay for his strategic plan. Currently, $21.4 million remain in the fund.

“Obviously, the requirements are going to be a lot more than $21 million,” Caslen said. “Then we’ll figure out … what will be resourced and what won’t be resourced.”

A firm, which Caslen hired to survey the current climate of USC, found that faculty members feel they are “given the responsibility and freedom to do their job.” It also determined that USC contributes “to the good of the community” and the reporting and advocacy of sexual assaults.

The study also reported that faculty does not feel “part of the team.”

"Senior leadership was a concern," Caslen said of the study's results. "Pay was inadequate, the institution needed to be run better and there needed to be regular, open communication."

Additionally, USC has an R1 ranking, or “very high research activity,” by the Carnegie Classification of Institutes of Higher Education. However, the study reported USC is below average in that classification with comparable schools.

“This is something, I think, that has to be addressed,” Caslen said.

As a part of his “ends, ways and means,” Caslen and interim provost Tayloe Harding discussed a compression and merit program for tenure and tenure-track faculty at the Columbia campus.

The compression program, which should be implemented by the end of the fiscal year, will increase salaries for tenure and tenure-track faculty who earn less than the 95% national average pay rate. The program's goal is to increase those faculty members' salaries as close to the national average as possible.

The amount of the raise depends on each professor’s salary and its distance to the 95% line, in addition to their position and field. For example, the national average pay rate for a full professor, or professor at the top of the tenure track, is $141,476. A full professor might receive a raise to make their salary equal to the 95% national average or a maximum raise of $8,000, whichever amount is less. Professors with a salary over the 95% average won't receive a raise.

“There is some limit to how much money individuals in each rank can get, because some people are so compressed that if we tried to bring everyone up to 95%, it would cost $15 million,” Harding said.

USC faculty haven’t received salary raises since 2007, according to Caslen.

“Lots of people have done lots of great work and haven't been rewarded for 10 years,” Harding said.

The merit rewards will be distributed from July 1, 2020, to June 30, 2022. The President’s Initiative Fund will give the compression and merit program $7.4 million, which is split in half for each.

Caslen said that the program is a form of “outreach” to numerous faculty members who reported their salary is an issue.

“This is also an opportunity for me, as the president, and also for the board, to outreach to our faculty,” Caslen said. “Recognizing salary issues with our faculty, an issue that's very important to them, and demonstrating that we care with this action, I think, would go an awful long way.”

The new health science campus will be located in the BullStreet District development district and will be funded through the Excellence Initiative. A required vote for the project is scheduled for April 24, and, if approved, it will enter a planning and design phase. After these phases, the campus will begin construction in 2023, and it aims to be finished by 2025.

“It is doable," Walton said. "We know where the existing and the future cash flows will be to actually pay for the thing. We won’t have to create any new money to get it done."

Correction Feb. 24 at 9:24 a.m.: A previous version of this article incorrectly spelled the BullStreet District.