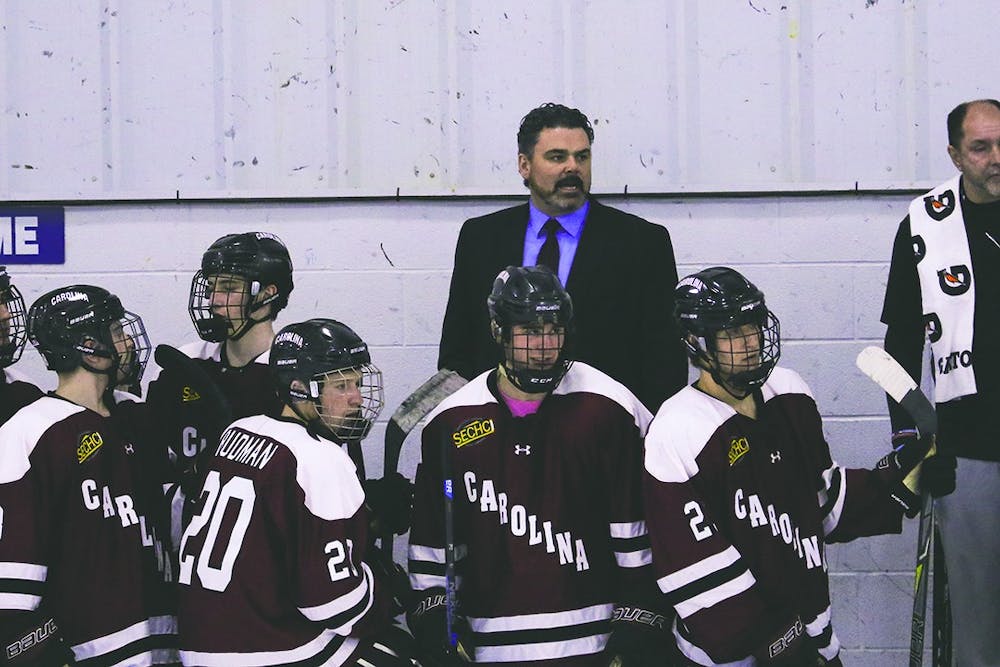 For many young athletes around the world, being able to leave a mark on the sport you love is an unimaginable dream. For South Carolina club hockey head coach Allan Sirois, this unimaginable dream became reality with his Hall of Fame career in the ECHL, formerly known as the East Coast Hockey League.

A Rivière-du-Loup, Québec, native, Sirois played 11 seasons in the AA minor league, scoring a career total of 594 points, the ninth most in league history. He also competed in the American Hockey League, AHL, and the Southern Professional Hockey League, SPHL, during his playing career.

Although Sirois suited up for five different teams throughout his ECHL career, his most notable was the Pee Dee Pride, whom he played with from 1998 to 2005. Sirois is Pee Dee Pride's all-time leading scorer with 432 points.

“We had a really good team and a good fan base down in Florence, [South Carolina],” Sirois said. “The people that I’ve met [playing for the Pride], the players that I’ve played with are still friends today.”

One of these friends is Sirois' former teammate, Ryan Petz, whom he played with for three seasons on Pee Dee Pride's team.

“There’s a reason that he's a ECHL star,” Petz said. “He’s an impact player. He affected the team in a very positive way each and every time he put on the skates for us.”

After the Pee Dee Pride folded in 2005, Sirois alternated playing between the ECHL and the SPHL before hanging his skates after the 2008-2009 season when he broke his arm.

However, nearly a decade after his last game in the ECHL, Sirois was inducted into the ECHL Hall of Fame in 2016.

“It wasn’t something that I really thought that would happen,” Sirois said. “I was just trying to play as best as I could every year – I thought I accomplished more than I really thought I would, and it was great to be recognized and see that I actually made an impact at the level I played.”

While Sirois was unable to reach the highest level of hockey in the National Hockey League, NHL, he said he loved his career in the ECHL.

“It was a blast all the way,” Sirois said. “Not many people in this world can say that they get paid for what they actually love – when you love something, you get paid for it, it don’t get better than that.”

Now, Sirois is in his fifth season coaching the South Carolina club hockey team. He is leading them to a successful season with a No. 2 ranking in the South Region of the American Collegiate Hockey Association, ACHA, and a No. 2 seeding in the upcoming SECHC Tournament.

As a coach, Sirois said being able to stay involved in the game he loves is one of his favorite aspects of leading this team.

"Makes me proud when players get better and we are successful as a team," Sirois said in a text message. "Very rewarding."