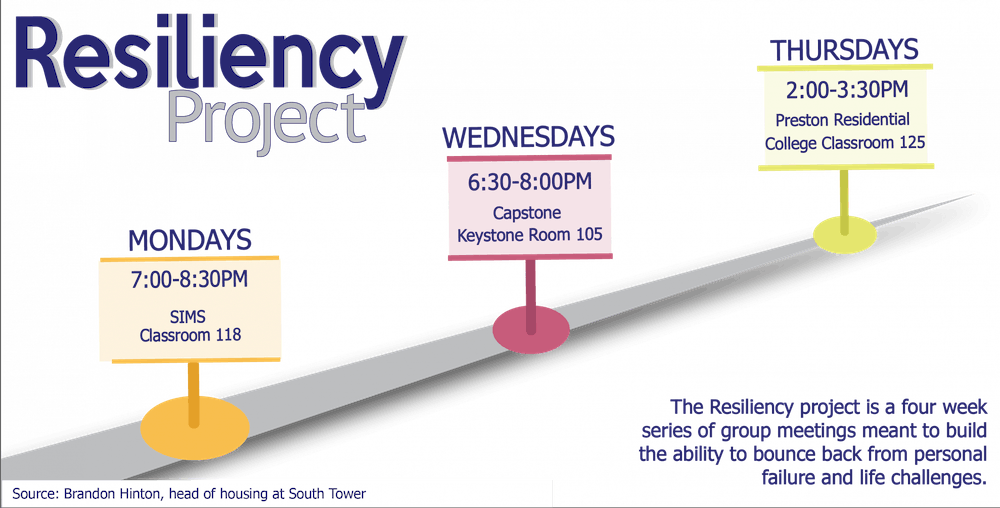 College is stressful, and failure is a part of life. In an effort to support the mental health of USC students, the university has started a series of seminars called The Resiliency Project, an initiative university President Bob Caslen announced in an op-ed published by The State.

“Life is going to happen,” April Scott, the associate director of mental health initiatives, said. “You’re going to continue to hit roadblocks along the way. That is something that's guaranteed in life.”

The Resiliency Project aims to help students “bounce back” from failure or personal challenges in life. The project will consist of group meetings over a period of four weeks, and anyone who reserves a spot is able to attend. Students can reserve spots through the email sent by student services or on the reservation website.

“You're learning skills that you're going to use for the rest of your life,” Scott said. “We’re really addressing the prevention and the overall well-being side of mental health.”

“They openly asked for any dialogue that we gave, asked us to share what we were comfortable sharing,” Pease said. “If we weren’t comfortable sharing, we didn’t have to. They didn’t push us. It was just a very friendly conversation with a few skill learning along the way.”

Kirsten Kennedy, associate vice president for student housing and well-being, said despite the array of mental health programs and initiatives at USC, they might not be reaching enough people.

“I’m not sure the net is cast wide enough, given the number of students that I feel are being impacted by that,” Kennedy said.

According to a 2018 study from SUNY-Buffalo from the National Alliance of Mental Illness, the base national college attrition rate, or the number of students who drop out before finishing college, is 27%. For those suffering from a mental illness, it is 64%.

As of Feb. 16, the current enrollment for The Resiliency Project is 14 reservations for the main series and 33 in attendance for the smaller 30-minute meetings led by resident mentors.

“We're hoping that people will get something out of it, and then, like, form a small community,” Rebecca Caldwell, the director of strategic health initiatives in Student Health Services, said. "We really looked at the idea of really connecting with others, is one of the big outcomes."

Going forward, Caldwell said word of mouth from participants and interacting with other organizations in the university would help expand the project's presence on campus.

To "cast a wider net," Kennedy worked with university housing to put this project, and the idea of resilience, at the forefront of students' minds, starting with the freshmen who will be living on campus.

“We kind of have a captive audience with first-year students,” Kennedy said. “We’ll be shifting the programming model to have that infused into the residence halls, about failing forward and learning how to fail and what are your coping strategies when you fail.”

The Resiliency Project tries to build skills in students, ranging from coping methods such as a gratitude journal to reframing past failures.

"We’ll think about, when you get in those high-stress situations, what coping skill can you use, are there some thoughts that run through your head automatically that really are harmful, and how can we repurpose those,” Caldwell said.

Caldwell said the goal of these different methods was creating an “immune system for life” and being able to realize that failure is a part of life.

“Would you be willing to possibly accept that this experience that you’re having, this hard break-up or this class that looks like right now you got a C average in, that that's a human experience?” Caldwell said.

According to Scott, resiliency is not just a trait needed for times of crisis, either. Scott said it’s important to know these skills can be used whenever to better one’s mental health.

“I think oftentimes students — not just students, people, conflate mental health and mental illness. They only think about their mental health in times of crisis, whereas resilience is a lifelong skill that you can implement at any stage. So when things are going well, you can still utilize these skills so that you can continue to have this positive mental health,” Scott said.

Caldwell said besides being academically successful, students should also be “satisfied and feeling whole as a person,” and she wants that to be a key takeaway from The Resiliency Project.

“So for folks to really come away from it feeling more confident in their own ability to grow; maybe more confident in recognizing the strength they have inside and how to do it, to [be] kinder to themselves,” Caldwell said.

Resiliency Project meetings are 7 to 8:30 p.m. Mondays in Sims Classroom 118, 6:30 to 8 p.m. Wednesdays in Capstone Keystone Room and 2 to 3:30 p.m. Thursdays in Preston Residential College Classroom.