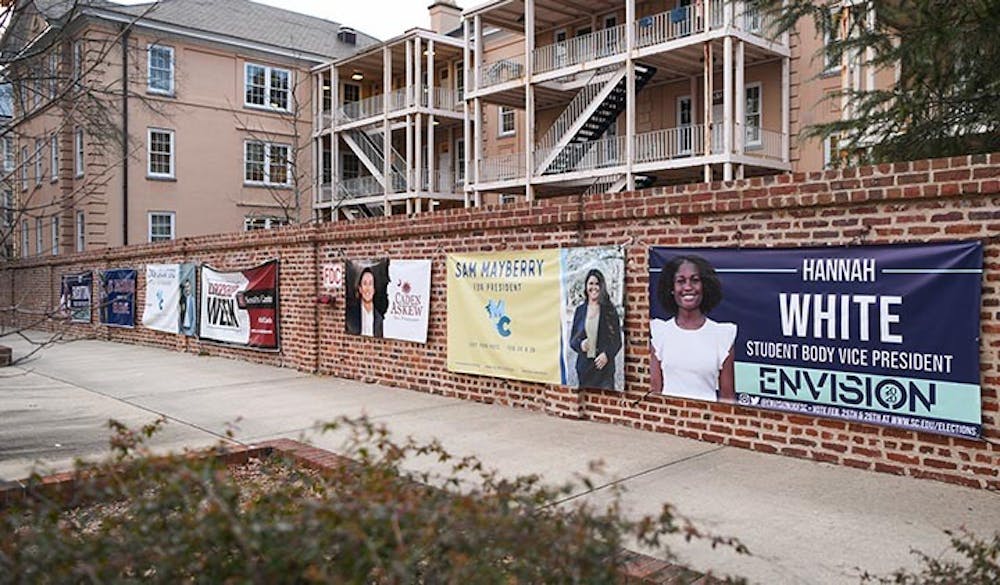 Part of the student body president’s role is to build relationships with university administration, students and constituents. Mayberry said her experience has already laid the groundwork for these working relationships.

In addition to engaging with students on social media, Mayberry said she plans to "hit the streets" and hire a director of engagement and community service to hear the student’s voice.

For Mayberry, having a diverse perspective in her office starts with the makeup of her cabinet. She said she'll invite student organizations who have traditionally had smaller voices to apply for staff positions.

Mayberry’s Mental Health Bill of Rights aims to partner with different organizations, residence halls and the university to push the pamphlet to success. The pamphlet will include mental health resources and university policies about mental health.

“I think we could definitely measure the success through a couple of things, including working with those administrators at the health center to be able to see if students are increasing the usage of kind of the underutilized mental health programming options right now,” Mayberry said. “That's really where we're missing the mark right now, is we have all these options, and the Counseling Center is often up to a two-week wait.”

For her platform’s inclusion and equity promise, Mayberry said she plans to achieve "religious equity within the attendance policy."

“If you're a Christian, you have Christmas off and you get to celebrate your holidays at home with your family,” Mayberry said. “However, if you celebrate a different religion, then you don't always have that luxury of being able to take the day off class. It's more up to the professor's discretion.”

According to an email statement from Brett Altschul, chair for the faculty senate committee for scholastic standards and petition, Student Government is “late to the game” in regards to attendance changes. With student input, the faculty senate has produced “draft changes” to the rules regarding excused and unexcused absences, which will be voted on by faculty senate March 4.

Another platform point for Mayberry is a safe apartment certification, which would be an online application apartment complexes fill out.

“Then USCPD would look and see what incidences have happened there, how the apartment complex has responded, how willing they’ve been to work with law enforcement and things of the nature, in order to make sure that they're a safe place to be sending our students,” Mayberry said.

Zach Crawford is a third-year marketing and human resources student running with presidential candidate Samantha Mayberry on the Mayberry-Crawford ticket. He is the only candidate with no Student Government experience.

“It’s ... bringing a bunch of different voices together through me, who's actually among them, their peer, who's been listening to them, their organizations, for the past three years,” Crawford said.

One of the main roles of the vice president is programming. One of Crawford’s programming initiatives he said he wants to implement is cultural celebrations.

Crawford said he plans to push out the Mental Health Bill of Rights from the vice president’s office. This would be attached to student syllabi and would include all of the mental health resources and university policies regarding mental health.

Crawford said he wouldn’t need to measure the success of the Mental Health Bill of Rights.

“I believe that the students who need it, will get it, and not everyone has mental health problems," Crawford said. "I can only provide them the resources necessary.”

With the inclusion and equity part of the Mayberry-Crawford platform, Crawford, a first-generation college student, plans to work with the Opportunity Scholars Program. His goal is to make an “entire university mentorship program.”

Crawford said he plans to keep the programs that have been implemented by the current vice president’s office but will focus on his new initiatives.

“I'm excited to bring in things that actually represent the student body, what they want, and not just continue programs that have already been,” Crawford said. “I'm not going to get rid of these programs. I think they're great, but it's not a focus of mine.

With no Student Government experience, Crawford said the vice president’s role comes down to representing the students.

Rushton, a third-year psychology and criminal justice student, serves as a university and presidential ambassador and secretary of first-year involvement for Student Government. She is running on the Envision ticket alongside vice presidential candidate Hannah White. She said she wants to increase the student government’s accessibility and transparency.

The Envision campaign is advocating for a mental health section on university syllabi which aims to let students know about mental health resources.

“That is something that will first go through the faculty senate and then to the Center of Teaching Excellence,” Rushton said. “We believe that mental health is also a pillar, and that should be involved in that syllabi as an example to all professors on campus.”

“It sounds like a simple change, however, in collaboration with faculty senate, I believe that it is absolutely feasible,” Rushton said.

In an email statement from Brett Altschul, chair for the faculty senate committee for scholastic standards and petition, he said, "The current [faculty senate] proposals mostly allow for students to have more excused absences— potentially with no upper limit with how many  — with no grade penalties to be assessed."

When discussing sustainability, Rushton said her campaign focused on the idea of making recycling more accessible during gameday.

Rushton also had the idea of a “campus safety week,” a program that would promote different areas of health and safety on campus, including rideshare and off-campus safety.

Rushton said she wants to make sure “student government isn't above the students, it's with it.” To do this, she said she would “give the voice back to the students.”

“Through programming such as Cocky's Tank [and] by revamping Cockstock, we plan to give the voice back to the students and allow them to have you know, a decision in every single initiative that student government does,” Rushton said.

Hannah White, a second-year marketing and finance student, serves as director of programming on the student body vice president’s staff and as a university ambassador. She said she wishes to use effective programming to amplify the student voice. She is running on the Envision ticket alongside presidential candidate Issy Rushton.

White said she wants the student body to know Student Government is "accessible."

“It is for them and that they are a part of it. Yes, we do have executive officers, but with that, that should not be an elite type of position; it should be a collaborative type of position,” White said.

One way White said she wanted to reach out to students was by creating “brave spaces.”

White said these are places where one can meet people who are involved with many different aspects of campus and who “do not look like you, sound like you, come from different backgrounds.”

White said she would improve parking at USC by letting students pay their fines in canned goods for tickets worth $25 or less. Students would be able to pay for these fines during the first week of classes or during finals week.

White said she wanted to take a look at “reforming the shuttle system” by extending the hours the shuttles run. To do this, she said she would work with Parking and Transportation Services and the Office of Off-Campus Living and Neighborhood Relations.

White said she is “very confident” she can get that done.

If she is elected, White said she would focus on her master class series in her first 100 days in office. She said this is “feasible, and I know that I can get it done.”

“The master class series would be the Student Government partnering with other organizations on campus in order to bring or host monthly master classes to bring alumni back to the university to pour into the students that have poured so much into them,” White said.

Running under the campaign “Elevate,” third-year political science and history student JD Jacobus is the current powers and responsibilities chairman and the uncontested candidate for USC’s third-ever speaker of the student senate.

Jacobus’ campaign is built around elevating resources offered to students and elevating Student Government itself.

In his first week in office, Jacobus said he will be dedicated to advocating for better printing services for students. He said he plans to push the implementation of printing kiosks, which currently exist at the University of Georgia and the University of Alabama.

“I just look at printing to say first this is because I think it’s the most pragmatic of my solutions, and I know it’s something that every student tells me they have an issue with,” Jacobus said. “A lot of times when I do interviews, people always say printing on campus sucks.”

The printing kiosks will be self-sustaining, Jacobus said, as students will still pay a fee for each page of printing.

“If you look at our bike racks on campus — and again, I hate to trash our campus — they’re so ugly,” Jacobus said.

Jacobus already spoke with facilities and housing about upgrading and increasing the bike racks on campus, which will cost about $300 per rack, and the department has funding available for the racks.

Jacobus also plans to revamp the shuttle system by renovating the buses and improving the training of the drivers. He said this would likely result in a tuition increase.

“I think most students would be in favor of [a tuition increase], just because so many people use the shuttle system,” Jacobus said. “You do have to make sacrifices every now and then.”

Jacobus said he will also increase student senate’s outreach on campus through tabling events so senators can be more representative of their constituents. According to Jacobus, tabling is currently an uncommon activity for senators.

According to the Student Government codes, comptrollers work with other student organizations to help them understand the process for requesting money. Student organizations can request money to fund events and travel to competitions among other things.

One of Askew’s main goals is getting student organizations to use all the available funds.

“The big thing about getting all that money used is it gives us a platform to ask for more, so that we can help students later on down the road because we have more money to allocate,” Askew said.

Askew plans to do this by directly contacting and educating as many organizations as possible on the request process for money.

Kate Lewis, the current student body treasurer, said reaching out to organizations is “so simple” to do.

“It's just finding out their contact information, which is public, and then making the time to go. So that's easy,” Lewis said.

Askew’s campaign Instagram account cites Barstool Gamecocks as its “creative direction.” Askew said he personally knows the people who run the Barstool account, and that is why he chose them to work on his campaign’s Instagram.

“I'm a business student. I don't have a lot of those relationships with people who have those capabilities, the software, the cameras, the equipment to do something of the scale I wanted to do. And so they were just a kind of natural transition for me as somebody I personally knew,” Askew said.

Another one of Askew’s goals is to create a "live" version of the budget that updates on a monthly basis that every student can access.

Askew thinks campaign caps should not exist, but "[doesn’t] think it would hurt" to require candidates disclose their finances.

Askew said he has finished spending for this year’s election, spending $800 total. He said he “tried to do it on a budget.”