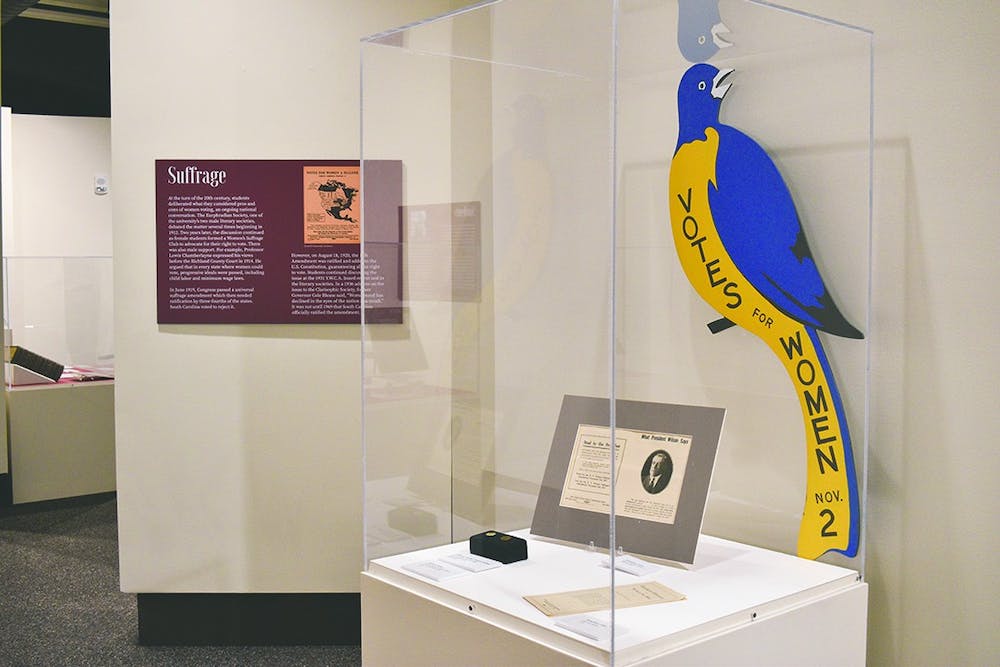 McKissick Museum is celebrating the 100th anniversary of the 19th amendment this year with "A Woman's Right." The exhibit examines the past to show how the women at USC fought for control over their bodies and lives.

The exhibit starts with the story of the undocumented enslaved women owned by the founders, faculty and staff members in 1801 and includes journal entries on their lives by Professor Francis Lieber.

“We only know 18 of those women by name," Lana Burgess, a curator at McKissick Museum and project manager for the exhibition, said.

These women worked on the Horseshoe and did work such as cooking, cleaning and laundry for students, faculty and administration. It is only a little over 200 years ago that women on this very campus were valued as nothing more than a maid.

Leila Rice, a fourth-year anthropology and history student, visited the exhibit and said women’s history is not always as preserved as men's history.

"Especially for enslaved women, there's not a lot of written history for them, so it's kind of hard to tell their story," Rice said.

Today, Wade Hampton, Sims and McClintock make up the Woman's Quad, where only females reside.

Old issues of The Daily Gamecock detail women’s involvement in the wars while on campus and said they “blossomed forth, not merely as decorative ornaments of beauty, but as able executives and hard workers.”

Although women eventually gained the right to attend, live and vote on campus, male students still controlled most campus organizations.

Female students fought for privileges male students had, and eventually the first co-ed club was formed in 1899. The club included 18 women and had the motto, "The woman is the better man." The first co-ed clubs paved the way for female-led campus organizations such as the "Woman's Writing Workshop" and "Girls Without Borders."

Girls Without Borders, for example, is open to both genders and focuses on promoting gender equality. According to Mandy Harper, president of the organization, this program also breaks down barriers to female education around the world.

"We need both male and female voices on campus to create that bigger conversation and to allow our university to grow and progress in the best way possible,” Harper, a first-year international business and operations and supply chain student, said in an email interview.

Burgess attributes the start of conversations about empowerment and education to past and present female-led organizations.

“We have the freedoms we have now because of those who came before us,” Burgess said.

“A Woman’s Right” will be on display at the McKissick Museum until Dec. 5 and is free to the public.