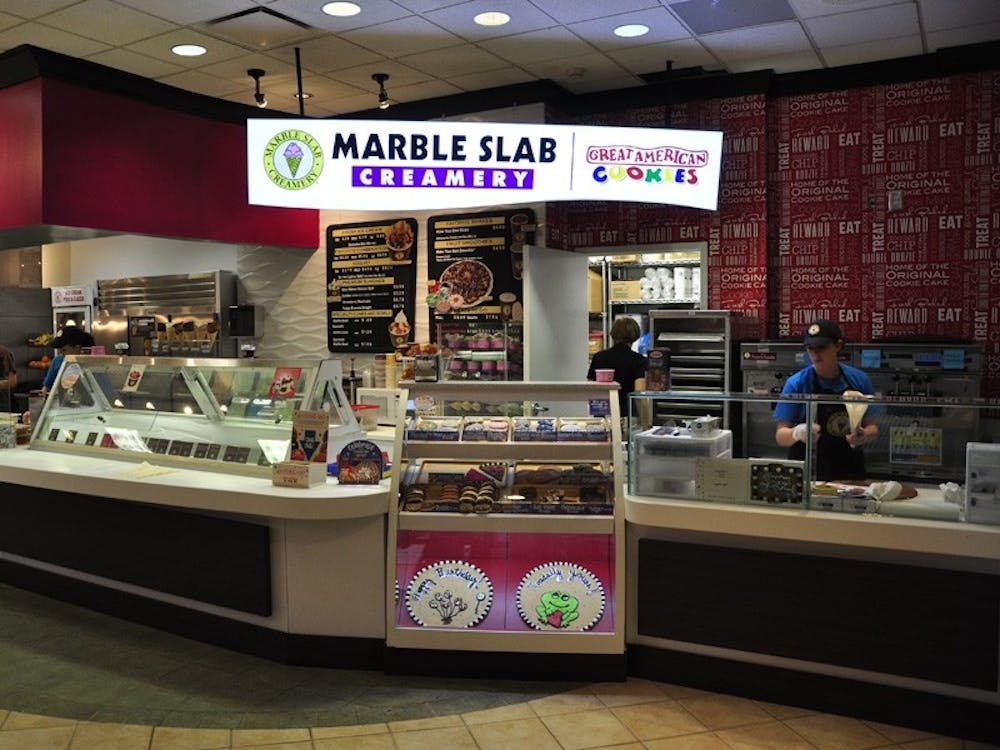 Russell House is quite literally the center of USC. It’s a place people can meet up, catch a movie, eat some food and become more involved on campus through the numerous student organizations housed there. Over the past four years, Russell has seen renovations, countless student organization meetings and a multitude of memories.

For Kim McMahon, the director of Russell House, the central building is where “ideas really happen.”

“Before I came to South Carolina, it was, I mean the whole bottom floor was covered in brick. ... It had the Pizza Hut and the Taco Bell upstairs, and it was kind of weird at first. I didn't feel like I was kind of supposed to be in the building,” Taylor said.

Taylor and his floormates had classes around Russell House, so they would gather there to eat food and talk. For Taylor, this was when he started to feel like he was in college.

“That was back when we had the certain time periods where you could get certain swipes and they had, instead of the pay at wherever you went,” Taylor said. “You had a restaurant, and then you went to the pay line. But it was nice because that's kind of like, that's when I really felt like I was at college is because I was with all my freshmen, like my roommates and my suitemates.”

Fourth-year finance student Justin Gill, who is also the president of this year's Dance Marathon (DM), said the meaning of Russell House has evolved for him as he moved up in DM. But to him, Russell will still be a place where he can meet up with friends and grab a bite to eat.

“Back when we had Pandini's, which was some killer pizza, but it was, I'd say was predominantly kind of a location where everybody would go eat food together and kind of hang out while eating,” Gill said.

As his time at USC went on, Gill began to realize that Russell House wasn’t what he initially thought it was, a place “just to go get food.” He said this change was him recognizing what “brings Russell House to life”: the student organizations.

“As I got into my senior year, working a lot more with different student organizations, I found it is a great place for kind of collaboration with student organizations as well as being able to meet a lot new people from places like Student Government, Homecoming, Carolina Productions, et cetera,” Gill said.

Taylor described the changes Russell went through over the years.

“I came back from my junior year and Russell House looks like, it looks like an airport. It was wild. You went away for the brick and the and the booths and the pay lines, too,” Taylor said.

Specific changes to Russell over the past four years include updated technology in meeting rooms, the addition of the intersectional lounge for students in the lower west wing and improved patio furniture. One of the biggest changes, according to McMahon, was the dining renovations, which introduced the full-service Chick-fil-A and Panera.

While new changes made Russell “wild,” Taylor also commented on the loss of some places like Pandini's and being able to get 6 to 12 tacos for a single meal swipe.

“Some of the food quality kinda went down a bit. But then, I mean you got stuff like Panera and you got stuff like, you know, a bigger Chick-fil-A line. But you could definitely see the change in terms of there was a lot more,” Taylor said.

These changes and additions made Russell a more “inviting” place for Taylor.

“I think now because it's so more open and inviting, especially like the outside. The outside could be so dingy at times, you know, because they had these old kind of tables and these old patios. But now they change into where it's all kind of colorful and it's supposed to be more modern,” Taylor said.

Russell House was also where Taylor was during the night of the Gamecocks basketball game against Florida to make it to the Final Four. He had been covering a tennis match for SGTV, and it had ended early, so he returned to Russell to edit while he watched the game, eventually witnessing the Gamecocks' victory.

“I immediately ran outside, ran down the stairs … and immediately went to the fountain. I was like one of the first people there with me and my friend. And then we saw students flooding from literally every direction coming to lose their minds at the fountain. It was like Indiana Jones or like Pirates of the Caribbean and seeing everybody run at you. So that was really awesome. But it was because I was at Russell House that I was able to experience that,” Taylor said.