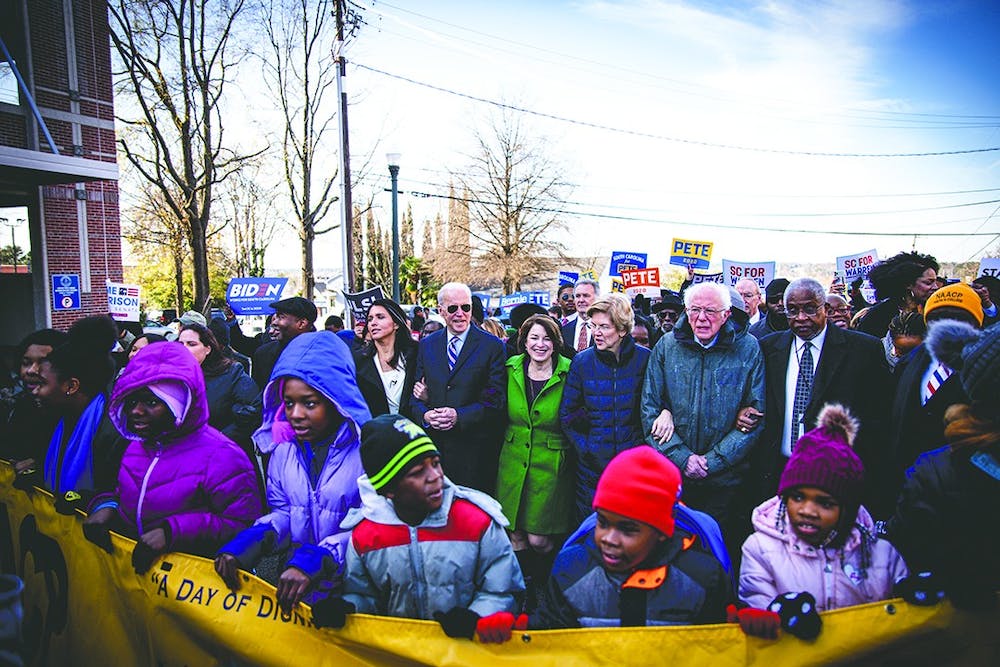 Most students only experience a presidential election once in their college careers. With the 2020 election right around the corner, political organizations at USC have an opportunity for growth in participation.

In more well-known groups, though, this growth has been mostly stagnant, according to College Democrats photographer Hayden Blakeney.

There are two well-established political groups on campus: the College Democrats and the College Republicans said Blakeney, a fifth-year multimedia journalism student. He added that there is "not really much to develop" in on-campus politics with these mainstream political groups, citing students' disinterest in politics.

Smaller organizations diverging from these two, though, have seen many new members join. Fourth-year economics student Dominick Aurelio, the former president of Turning Point USA at USC, has seen growth in the organization over the past several years.

“We used to be only like four people or so would show up to meetings. ... When we have a rep come from Turning Point, we could usually fill a whole room with over 30 people,” Aurelio said.

On the opposite end of the political spectrum, third-yearpolitical science and women's and gender studies student Madison Baker, who is a member of the Young Democratic Socialists, has seen growth in the organization since joining two years ago.

“We have like over 100 people on our email list right now, so that was skyrocketed from the beginning,” Baker said. “My freshman year we were doing some stuff we're doing ... but we hadn't expanded as much into the community and then to campus politics.”

This role in on-campus politics and activism is one the Young Democratic Socialists embrace by starting petitions, including one for USC to give partial housing refunds due to COVID-19 closures.

“If there's any problem at USC, or like any way, any social-justice-oriented problem, we're gonna jump on it,” Baker said. “When USC hadn't yet announced that they were giving refunds to students for housing … we started a petition against the university that got, like, three or four thousand signatures.”

Turning Point USA has taken to one-on-one conversations to engage students in politics, challenging passers-by to change their minds on an issue.

“We did one that was ‘Build the Wall’ and that got a lot of people to come. I think we had some great conversations,” Aurelio said. “That's probably one of the best ones we've done.”

The Young Democratic Socialists have used a similar practice as well, with its “Ask a Socialist” tables.

One of the largest recent examples of political involvement at USC was the protests against President Bob Caslen’s election, Blakeney said.

“In solidarity and kind of just like trying to big tent [unite] everyone around one [issue], which is pretty rare, honestly, for any kind of group of student orgs to partake in,"  Blakeney said. "The Caslen thing was more of a unifying action."

The protests attracted a wide variety of groups, including the Association of African American Students, the Young Democratic Socialists, as well as many students from the College Democrats.

However, the campus as a whole may not be as passionate about politics as these movements suggest, according to Blakeney.

“I think USC as a school does have a lot of options for that, but it's kind of unfortunate that I think a lot of students, quite frankly, have the privilege to not really care about politics, they see it as … ‘Oh, that’s kind of interesting, I have to go to class,’” Blakeney said.

In a national study of democracy in higher education, voter turnout rates for college students doubled between the 2014 and 2018 midterm elections, from just below 20% to just over 40%. Now, because of this increased level of involvement, college students – those at USC included – may be the deciding voice in the upcoming presidential election. Still, these findings show that less than half of college students are engaged in the political process.

In election years, events such as candidates visiting campus can increase voter engagement. Stephanie Justice, a third-year public relations student and member of the College Democrats, said these visits have benefits for political involvement as a whole.