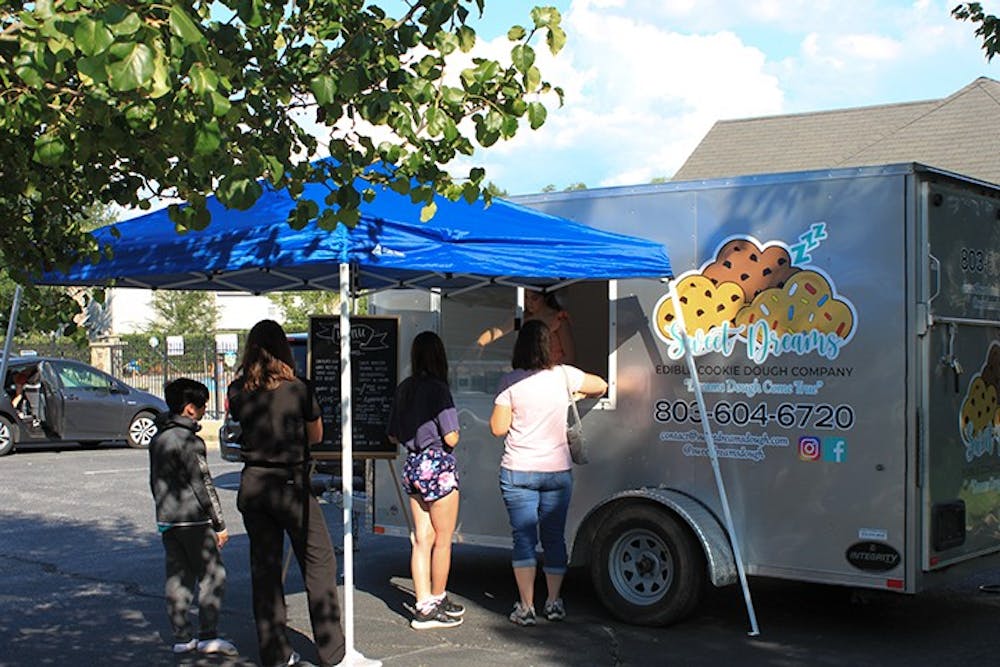 COVID-19 has caused many people to lose their jobs over the past few months, but a Lexington couple has used the pandemic to their advantage to start a new business in under two months.

Collen Wallace and Julianna Livatino started their food truck Sweet Dreams Edible Cookie Dough Company on July 4 after seeing how well food trucks did in their neighborhood during the pandemic due to restaurants closing down.

“COVID made our plans. We would have never thought about opening up a food trailer ever unless I saw the opportunity from COVID,” Wallace said. “[Food trucks] were killing it every day.”

"We have a chef that makes it for us, and he has all the flavors and the ingredients," Wallace said.

Wallace said they decided to sell edible cookie dough because “nobody in the Midlands is doing it.”

“Edible cookie dough is kind of like a new thing,” Wallace said. “A friend of mine told me about it about a year and a half ago, and it's just always stuck in my head.”

Livatino came up with the name 'Sweet Dreams' for their food truck after thinking that people usually have something sweet usually around dinnertime.

The food truck is currently visiting neighborhoods around Lexington, Chapin and Irmo to sell the cookie dough and is also making plans to cater to events at Nephron Pharmaceuticals and a children's activity center along with others.

“Right now, we’re doing neighborhoods, but we do have a few weddings in the books for the next few months coming up,” Livatino said. “We’re not just limited to neighborhoods.”

In the future, the couple wants to expand to Columbia's Soda City Market and establish a permanent location in Lexington, Columbia or Chapin.

In addition to their new business, Wallace is an at-home full-time sales representative and Livatino is in online nursing school at Midlands Tech.

"It's more of a side business that may turn into a full-time job," Wallace said.

Wallace and Livatino also have a baby boy.

"We obviously love that we can serve people a product that is so awesome, but we're also conflicted about being away from our kid so much," Livatino said. "I have my mom or his mom that helps so much. It's tough when we're double-booked and we miss him so much, but it's also really rewarding when we can bring a product to people that they love."

Livatino said their customer base has been more “family-oriented” lately due to visiting neighborhoods.

“It’s really been a mix of all age, ethnicity, I really couldn’t pinpoint it to one thing,” Livatino said.

Jodie Coward, a resident of one of the neighborhoods the food truck visited in Chapin, said it's a great investment for neighborhoods with a lot of kids in it.

“It’s one of those things where we don’t want to take our kids outside of our bubble, so to have them come here is amazing," Coward said. "We’ve been getting a lot of regular food trucks for dinner and stuff, but this is one of the only ones other than Pelicans that’s a sweet treat.”

Livatino said they are “blessed” to have such a great turnout in the first two weeks of their business.

“It’s been a whirlwind, actually. We were not expecting the turnout and everything that we have gotten, but we are blessed,” Livatino said. “It’s been really busy and kind of tiring, but I like it.”