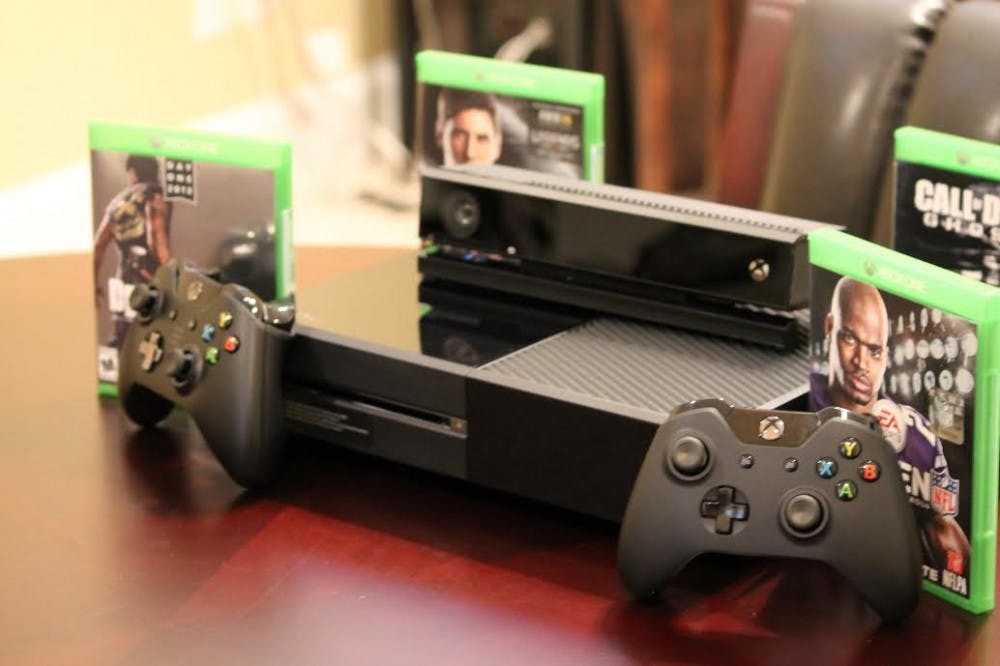 Xbox One a high-tech upgrade, but not without flaws

The Xbox 360 that sits in my living room is hardly the system I purchased back in 2005. Since the release of the popular video game console, Microsoft has taken the liberty to integrate media to coincide with the era of smart phones and tablets. Microsoft’s goal was to make the Xbox 360 an all-in-one home entertainment device. In the case of the newly released Xbox One, it is what

Microsoft has been striving toward all these years. The Xbox One is a leap into the future, while still clinging to the great foundation the system was founded on.
The console itself is large and bulky and the thick black box-shape is not subtle. The goal for

Microsoft was to have the system blend in with other entertainment devices and the system would look at home among DVD players and sound systems. The Kinect is also larger than its predecessor and the not-so-welcome gigantic power brick also rears its ugly head. Due to this increase in size, it allows the console to run much more quietly and it stays cooler. The Xbox One also sports a variety of cord inputs for an entertainment system. For example, the console has three USB 3.0 ports with two on the back and one on the side, along with an HDMI input in the back designed for the system’s television capabilities. The Xbox One also includes a Blu-ray drive and a 500 GB internal hard drive. While it might sound like a lot of space, considering the Xbox 360 launched with only a 20 GB internal hard drive, the Xbox One requires that games be downloaded to the hard drive and most titles at launch come with a 50 GB install so space will fill up quickly. However,

Microsoft did say that it would support external storage after launch so this is an improvement with the capacity issues the Xbox 360 faced eight years ago.
Many gamers believe that the Xbox 360 controller was among the best in the industry and pondered why Microsoft would want to fix something that did not seem broken. The Xbox One controller sits comfortably in the player’s hands with two thumbsticks which are much smaller but more accurate, a pair of triggers on the back which are sensitive to touch and include rumble motors and the D-pad now resembles a cross and feels much more accurate than its predecessor.

The controller captures a similar feel and improves in almost every way. The only conflict with the controller is the two shoulder buttons above the triggers. The buttons are built into the controller and no longer stick out, which makes it difficult for fingers to find the buttons.

Anyone familiar with the bright colored tiles from Windows 8 will feel right at home trying to
navigate the Xbox One. The user interface is clean and sophisticated and quick to respond when compared to the cluttered pages on the Xbox 360. It was difficult to manipulate some of the settings on the console as they are buried behind the multitude of menus.

Navigation with the Kinect is simple and easy, with a few vocal commands such as “Xbox select” and “Xbox store,” which launches the system’s online store. It appears that Microsoft’s intention was to have voice navigation to be the go-to tool while navigating the Xbox One, but anyone who still wants to interact with the console can still do so comfortably with the controller. The Kinect is also used for a lot of other things throughout the user’s experience with the Xbox One. A player profile supports facial recognition through the Kinect’s camera, so when playing with a group of friends on a couch, all they have to do to sign in is grab a controller and sit in front of the console. The best part is that these functionalities actually work and feel very futuristic and mind-shattering when considering the possibilities.

While the Xbox One has a variety of games that launched alongside the system, most of them are not exactly the best the industry has ever seen. “Dead Rising 3” is fun, but frustrating to control and can be a real pain listening to the poorly written characters. “Madden 25” feels like a step backward for the franchise and doesn’t really take advantage of the Xbox One’s hardware capabilities and still looks like it belongs on the Xbox 360. “Call of Duty: Ghosts” also suffers from being designed to perform on last-generation consoles, and lacks some, if any, visual distinction from its counterparts. Not only do these games not look compelling, they also include long loading times which are quite frustrating considering this is supposed to be “the future of gaming.” However, the system has a decent lineup of games now and Microsoft is banking on “Titanfall” to be a system-seller in early 2014.

Microsoft set sail with the idea that this generation is more than just the games. The next generation of games is meant to be aligned with apps, music, television and integrated experiences which can all be tied together by the Kinect. The Kinect feels unfinished and not yet fully realized, but the Xbox One has firmly shown that Microsoft’s bold direction is a boon to all gamers. The combination of easy-to-use software and hardware raises the bar on an already impressive system. Microsoft is really looking forward more than backward, and the Xbox One feels like a next-generation entertainment device.