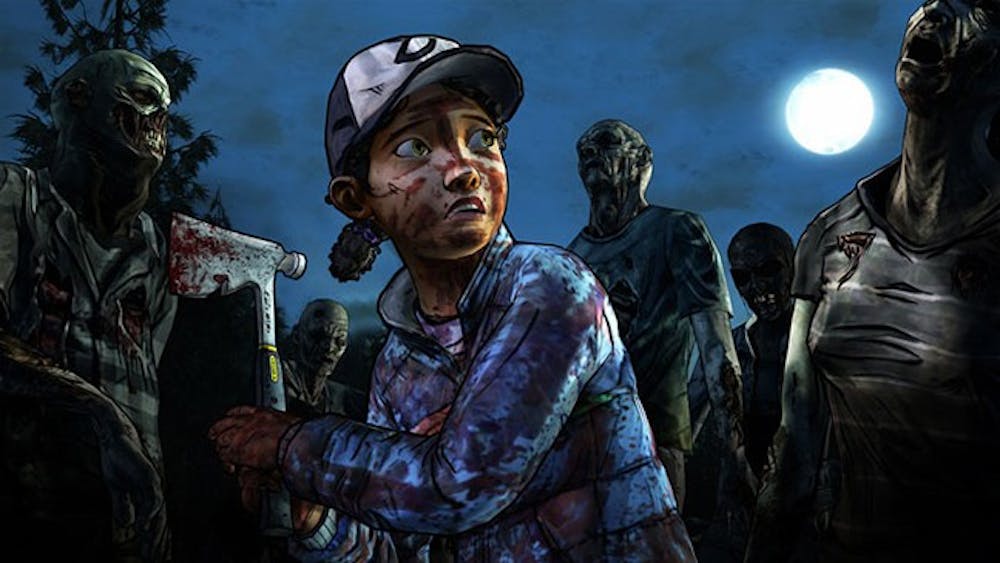 “The Walking Dead: Season One” was a surprise hit — a story-heavy episodic video game based on the “Walking Dead” franchise that was full of pathos and excitement in equal measure.

“The Walking Dead: Season Two,” while rich with atmosphere and 1characters, lives in the shadow of its predecessor and fails to be as emotionally impactful.

The game follows Clementine, a survivor from the end of last season, forced to abandon her childhood innocence in order to survive the suffocating darkness of a post-zombie apocalypse life. She’s a strong protagonist who deserves a season with a stronger ending. After a season of dramatic highs and demoralizing lows, the credits rolling left more emptiness than triumph.

It isn’t the feeling you get after turning the final page of a great book — it’s more akin to being promised a great dinner, but only receiving a frozen corn dog. The final episode, “No Going Back,” has all the tools to have ended the season with a bang but only ends up fizzling out.

The premise of this season was to give the player a choice on Clem to grow up. They could have her go down the path of the ruthless killer, Carver, or become the nurturing leader like Lee from the game’s last season.

By this point, the series has taken the player through so much with Clem — from when she was old an 8-year-old girl trying to survive in the streets of Atlanta, to the hardened, determined survivor she becomes. Coming into the finale, you’d expect to see how Clementine was going to grow and how all the decisions you’ve made shaped Clementine, for better or worse, but that’s not what is delivered.

The episode starts strong — the events leading up to this episode’s climax are intense, the worst situation the survivors have been in. The weather is chilling to the bone, supplies are low, and emotions are running high.

“No Holding Back” has some beautiful moments amid the action. The season has done an exceptional job with character development and dialogue as opposed to the action, but those moments really stand out here. Every moment of peace is always short-lived, lending a foreboding feeling looming over your shoulders, but the player learns to enjoy these moments, remember those left behind and learn to live with the choices they made in an effort to survive in the zombie-infested world.

The biggest issue with this season is its manufactured drama, when someone would leap out of character and put themselves and everyone else in danger for seemingly no good reason.
This is the issue that is so frustrating.

How can you have a game built upon choice when the player has none? These moments feel forced, arbitrarily adding more drama and bloodshed to the plot, rather than letting events grow organically from the decisions the player has made. At one point, a major character makes a promise to never do something ever again, and not even six seconds later they seem to forget that promise after a mild problem surfaces and go on a rampage that endangers everyone.
Action is needed to drive the story forward, but it shouldn’t be forced and out-of-character. It was frustrating seeing the “adults” act like children. The game wanted to give the player the idea that the stress of the situation was causing them to lose their sense of mind, but all it winds up doing is nearly ruining the emotional payoff at the end.

The most surprising part at the end wasn’t the jaw-dropping loss of a major character; it was how the game tosses all notion of Clem’s character development out the window. While the player is mourning the loss of an old friend, the scene is interrupted with a stale and predictable pre-death monologue where the character tells Clem that the decisions she made were not her fault.
If the game stayed true to it’s original premise, then Clementine should have been developed where she did not need reassurance, but instead, the game opted for a few seconds of boring generic dialogue.

“The Walking Dead: Season 2” is by no means a bad game, but the journey was more enjoyable than the ending. The characters are memorable, despite their flaws, and watching Clementine grow gave an oddly strong sense of pride.

The story is worthwhile and should be an experience every gamer or fan of “The Walking Dead” franchise can enjoy.