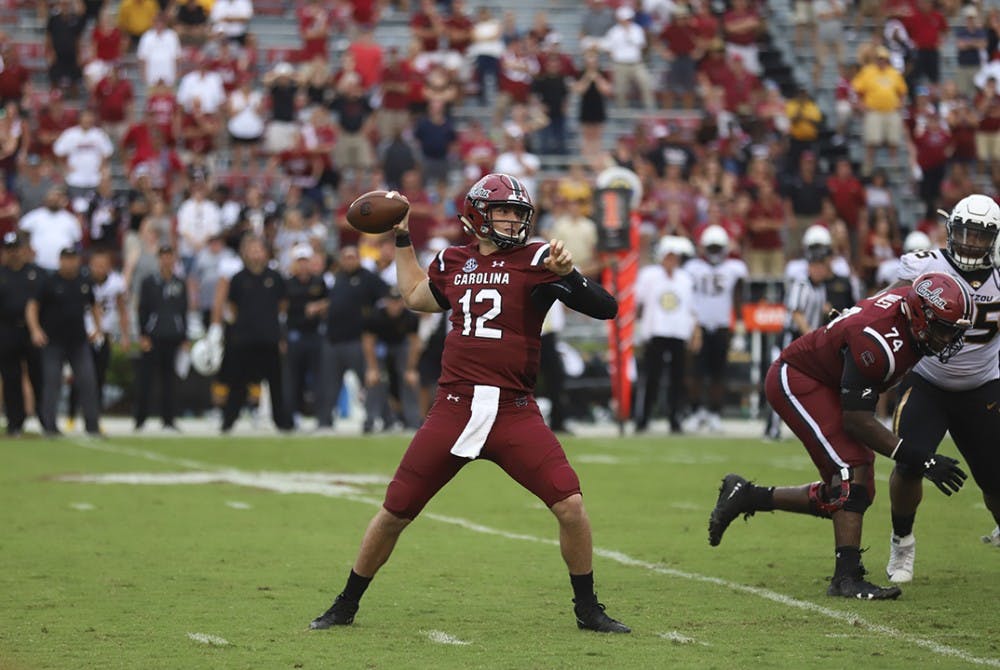 The stakes were high for backup quarterback Michael Scarnecchia as he endured a rain storm and the pressure of his first collegiate start to lead South Carolina to an SEC victory.

This fifth-year senior and first-time starting quarterback completed 20-of-35 passes for 249 yards against Missouri. Scarnecchia’s unfamiliar face soon became the talk of the game as the senior threw three touchdowns.

“I was not nervous,” Scarnecchia said. “I felt confident in my abilities and how the coaches prepared me and the rest of the team, so I felt good on our game plan and everything. Knowing when to play, game time. Jake [Bentley] was getting reps this week, I was getting reps this week. It was just be ready, because you never know what's going to happen. When it came to the decision, I was ready.”

After Jake Bentley’s knee injury, the Florida native got his opportunity to take over the team he's been a part of since Dylan Thompson had the starting job. And he took full advantage.

Scarnecchia took the adversity and ran with it, leading a final push down the field to put the team in field goal range after two lightning delays.

Still, the transition in leadership was not only a challenge for Scarnecchia, but each Gamecock on the field. But overcoming the challenge was something that South Carolina players took pride.

“I felt like we had some pretty good chemistry today,” wide receiver Bryan Edwards said. “We completed passes and whoever is in that quarterback, in the receiver room, we expect to make plays and make the catch no matter where he puts it. Just give us opportunity. That’s what we say. We went out and I think we did a good job of that.”

Players agreed the confidence that the Gamecocks had in Scarnecchia spoke volumes of their team chemistry. Offensive lineman Donell Stanley said his advice to Scarnecchia was to calm down because his team had full faith in his abilities.

“We brought you here for a reason, so when the big moment comes, just be prepared for it,” Stanley said.

Scarnecchia, the team's second-string quarterback, got the start ahead of fellow backups Dakereon Joyner and Jay Ulrich.

Patience was something that Scarnecchia discovered early on in his collegiate career at South Carolina as he maintained a backup role for multiple seasons. The effort that Scarnecchia put behind the scenes paid off, as he led his team to a 37-35 win against the Tigers.

His teammates expected just that.

Senior linebacker Bryson Allen-Williams, who has played alongside Scarnecchia for years, reflected of memories of when he and Scarnecchia used to dream of making “big time plays for South Carolina.”

“And just to see that come true today, I’m so proud of Mike,” Allen-Williams said. “We always talk about it, just be ready when the opportunity comes. I can’t wait for you to show everybody what you can do. A lot of people never really counted Mike in, but I’m glad he was able to go out and show the world today. He really helped us win this game.”