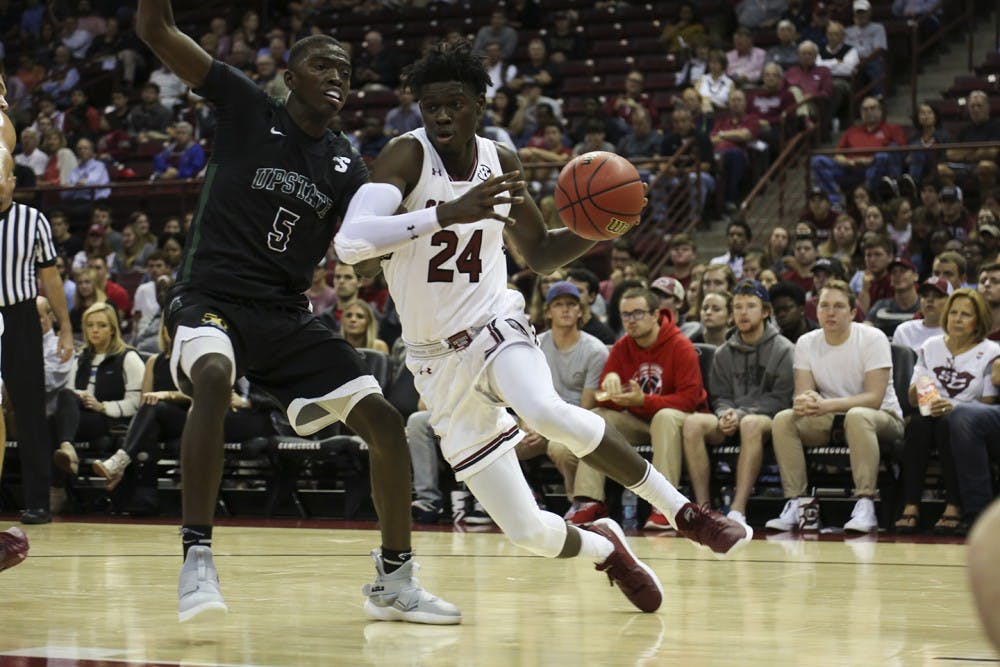 Keyshawn Bryant excelled in his first appearance for South Carolina, as the Gamecocks (1-0) earned their first victory of the 2018-19 season against University of South Carolina Upstate (0-1) at Colonial Life Arena on Tuesday.

South Carolina’s 65-52 victory marked a significant night for Bryant’s career as he led the Gamecocks in scoring with 21 points. Head coach Frank Martin credited Bryant's performance to scoring three-pointers in practice and general approach to scoring.

“He’s got a knack to score,” Martin said. “Some guys can jump and dunk, but they have no feel how to score ... Offensively, some of those offensive rebounds, that tells me he doesn’t stand and watch ... He’s going to be fun.”

In addition to Bryant, senior forward Chris Silva finished the evening second in scoring for South Carolina with 13 points.

Despite falling behind early to USC Upstate, 9-2, South Carolina eventually dominated in scoring, holding the Spartans scoreless for over 10 minutes of the first half.

Tuesday’s season opener also marked the first start for freshman Spartan forward Brandon Martin, who took part in his first collegiate appearance against his father. His father said he had plenty of emotions upon seeing his son in the handshake line post-game.

“I don’t wind down real easy,” Martin said. “I’m shaking hands and I totally forgot that my son, Brandon, was going to be in this line ... I didn’t want to separate him from his team in that moment ... To see him play with the aggression and the courage that he played with, that’s who I am and it makes me proud to see my son doing that.”

With the Gamecocks combining for a total of 50 rebounds against the Spartans, highlighted by 31 on defense, Martin acknowledged his team’s effort across both sides of the court.

Still, Martin said there are areas where he's eager to see his young team grow.

“We’re still too quiet," he said, "and that comes with having so many first-year guys ... defending and rebounding – those are things that are important to me every single year, every single day.”

The Gamecocks will continue their three-game homestand against the Stony Brook Seawolves on Nov. 9 at 7 p.m. at Colonial Life Arena, kicking off the Naismith Memorial Hall of Fame Tip-Off.