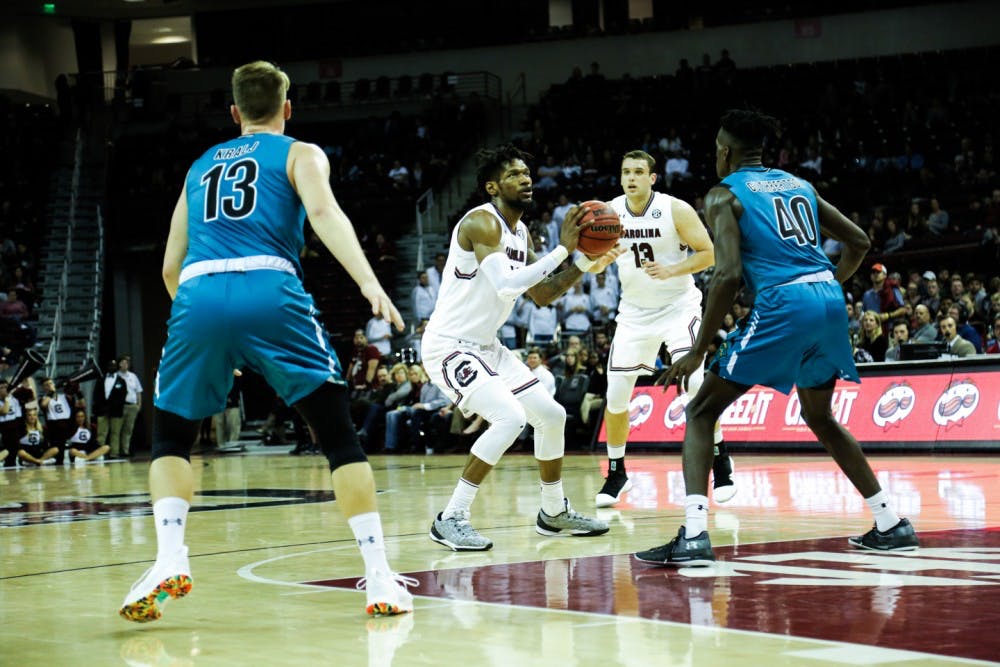 Head coach Frank Martin made the decision to start three freshman alongside junior Maik Kotsar and senior Chris Silva, leaving his only other senior, Hassani Gravett, on the bench.

“If I start Hassani and we work down the bench, everyone else is here for the first time in their life," Martin said. "I like the fact that I’ve got a guy coming off the bench that, if the game doesn’t start the right way, or if something’s not going the way it needs to go, you can come in with somebody who’s been through this, that understands, who’s not going to be emotionally attached to the moment and I think that gives our team balance."

Martin’s team this year is dealing with the inexperience that comes with having freshman starters, and senior Hassani Gravett said he and Silva recognized the shoes they'd be expected to fill long before the season started. He added that he's been working on perfecting his game so that the Gamecocks can consistently rely on him, especially improving his shooting accuracy.

“I worked on my shot this summer, just getting in the gym working on my craft as much as possible," Gravett said. "I knew with losing so many guys that we did, somebody was going to have to be able to step up and hit some shots, whether the tough shots or open shots, either way to win."

The inexperience of the freshmen on the court showed in the first half when freshman A.J. Lawson was fouled in the paint multiple times in quick succession for driving straight in Coastal Carolina’s defense.

Lawson, however, had a quality game overall, leading the team in scoring with 25 points.  The Gamecocks began to secure a lead going into halftime after Kotsar hit a 3-pointer right at the buzzer to make the score 50-41.

The second half saw fewer Gamecock baskets, but South Carolina maintained consistency in their 3-point shooting, something the Gamecocks have yet to see much of this season.

After Martin benched Silva for a slow start, the senior managed to put some points on the board in a few minutes of playing time at the end of the second half, giving him a chance to impact the game with a last surge of momentum.

Martin acknowledged that Coastal Carolina was without two guards due to injury and said  his team did a good job of wearing down the Chanticleers' remaining guards. He said it's been a continual challenge to have aggression in toss-up situations and that the team needs to work on securing rebounds.

“First of all, we’re a soft basketball team. We don’t rebound and we don’t make competitive plays when the ball is ... in the balance," Martin said. "People like to call it fifty-fifty. What’s a fifty-fifty? No one has the ball. Go get it. It’s yours."

Fifty-fifty chances are something the Gamecocks aim to address in practice before their next game against the Wyoming Cowboys on the road. That game will tip on Dec. 5 at 9 p.m.