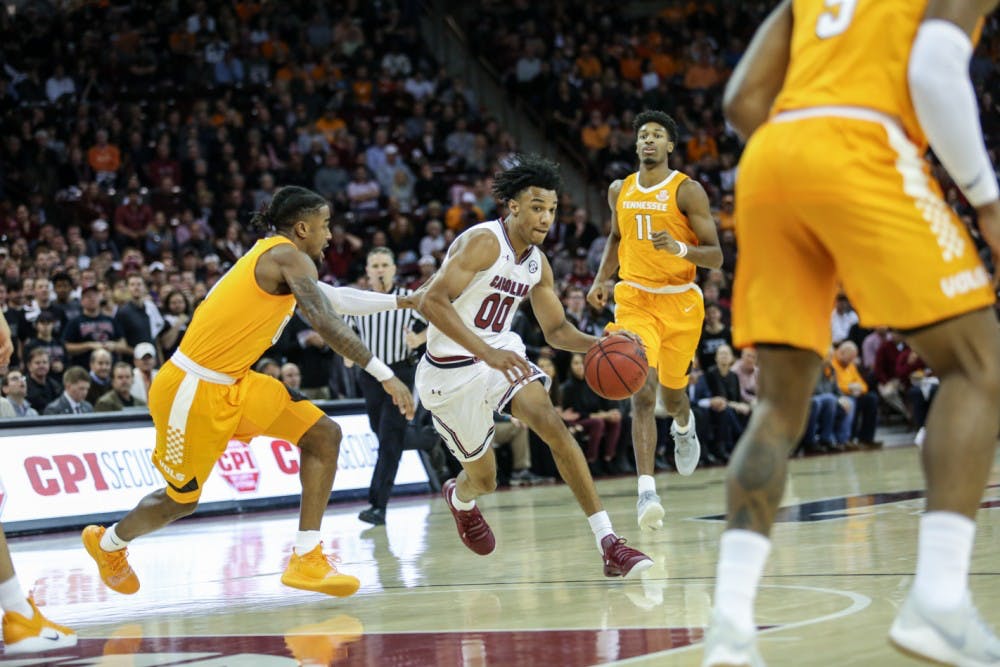 South Carolina dropped an SEC matchup, falls to No. 1 Tennessee

The Volunteers jumped out to an 8-5 lead to start the game. But the Gamecocks came back to knot the score up at 10 points a piece after nearly five minutes of play.

Tennessee proved to South Carolina why its top-ranked team in the nation by going on a 10-4 run over the next three and a half minutes. The Gamecocks started to successfully sink shots from the field and the free throw line, but the Volunteers consistently answered by shooting five for six from the field in the next four minutes.

Tennessee outscored South Carolina 16-15 to end the first half which resulted in a 47-38 score in favor of the Volunteers at the break. At the end of first half, the Volunteers had shot 58 percent compared to the Gamecocks’ 42 percent.

“They made few mistakes which allowed them to get baskets,” senior forward Chris Silva said. “When we [were] not making shots, they were really relentless on the rebound.”

Despite the deficit, Silva led the team with 22 points in the first half.

Going into the second half, the Gamecocks went on a 13-9 run shooting six for eight from the field to cut South Carolina’s deficit to five points in the first four minutes of the half.

South Carolina continued this momentum later on as they rallied to make the score 60-58 in favor of Tennessee with the help of freshman guard Tre Campbell’s six points in a span of 46 seconds with 13:07 left in the game.

Despite this, the Volunteers went back to shooting lights out from the field by going on an 18-6 run over the course of over four minutes to increase their lead to a 78-64 score with almost eight minutes left in the ball game.

Tennessee cruised the rest of the game, not allowing South Carolina to score in the last minutes of the game. The Volunteers ended the game on a 10-4 run to seal the win.

“We couldn’t sustain the discipline and the toughness you’ve got to have to get to the finish line against a team like Tennessee.” head coach Frank Martin said.

Silva ended up leading the Gamecocks in points with 28 on the night but was held to only six points in the second half. Tennessee ended the night by shooting 56 percent from the field as opposed to South Carolina’s 40 percent.

South Carolina will look to get back in the winning column on Saturday afternoon as they take on SEC rival Georgia (10-10, 1-6 SEC) in Athens, Georgia at 1 p.m. on the SEC Network.