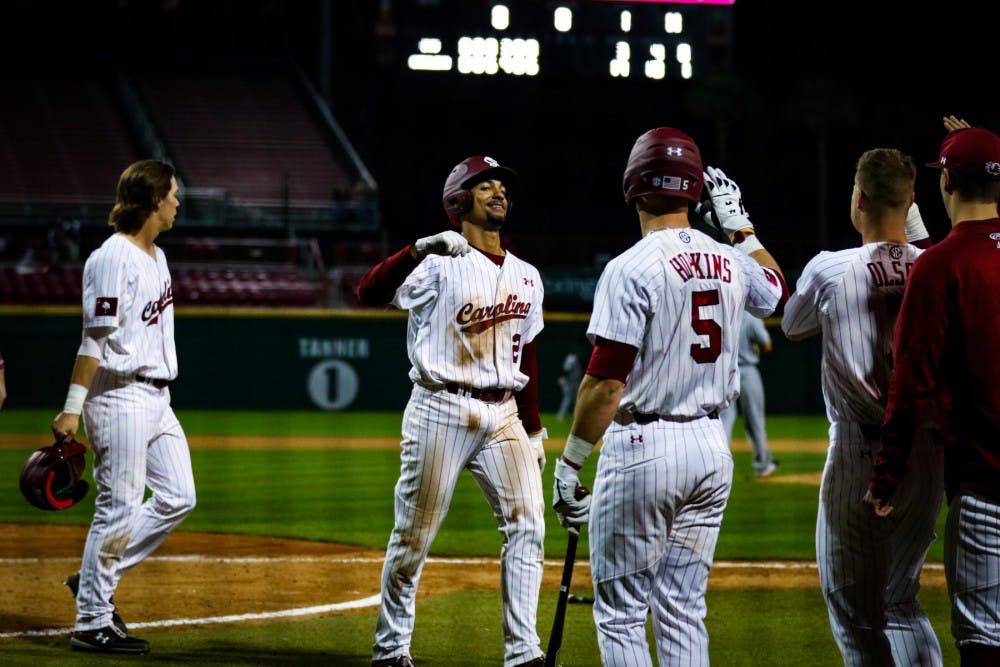 The Gamecock offense was at the forefront of South Carolina baseball's series opener against Utah Valley on Friday evening and won with a score of 15-3.

Third baseman Jacob Olson led the attack, driving in four runs on a double and a home run.

“We’re confident in our whole lineup,” said Olson. “We’ve got confidence in everybody so we feel good going forward.”

South Carolina opened the scoring in the bottom of the third inning after sophomore Noah Campbell and junior Quinntin Perez both reached base on singles, Luke Berryhill stepped to the plate and drove the pair in on a double.

Next came Olson, who drove in Berryhill with his third home run of the season.

Things changed as Utah Valley’s offense woke up in the top of the fourth inning. Mlodzinski walked the three Wolverine batters to start the inning. With one out, shortstop Nick Neville had a potential inning-ending double-play ball that quickly turned into a run for Utah Valley.

The mistakes didn't end there for the Gamecocks. Later in the inning, with the bases still loaded, Mlodzinski walked another batter and worked out of the bases loaded jam, however not before surrendering a third run on a balk.

The Gamecock offense made up for the errors in the fifth inning. With the bases loaded and nobody out, Berryhill was struck by a pitch to drive in the sixth Gamecock run of the day. Olson kept the bases loaded rally alive with a two-run double to push the lead to 8-3. Utah Valley surrendered one more run in the fourth on a walk.

Sweatt’s performance marked his debut as a pitcher for the Gamecocks.

“I felt good going out there for the first time,” said Sweatt. “I’ve been waiting on this moment for a while now. I'm a freshman, so it was a good experience to get my feet wet finally.”

While the bullpen held the Utah Valley bats to a minimum, the offense continued to attack. The Gamecock tacked on another five runs in the bottom of the sixth and a final insurance in the eighth.

The Gamecocks will look to take a 2-0 series lead Saturday afternoon. Left-handed pitcher Dylan Harley will likely make the start for the Gamecocks against Utah Valley’s Paxton Schultz. First pitch is scheduled for 2 p.m.