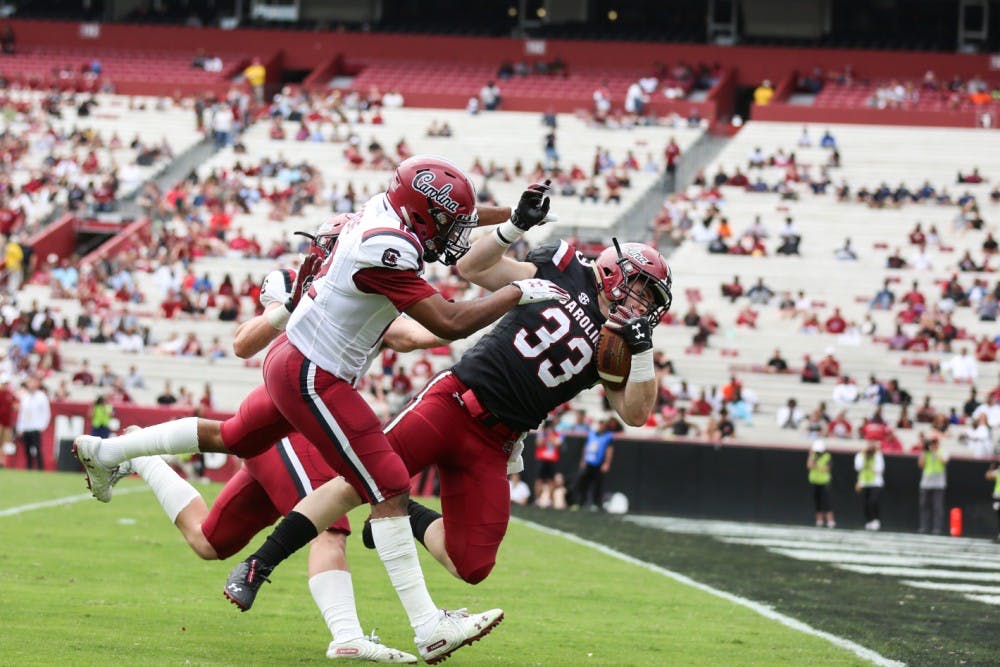 In Saturday's Garnet & Black Spring Game, the Garnet team defeated the Black team by a score of 28-16 in front of a crowd of more than 25,000 at Williams-Brice Stadium.

"I told our football team it's about leave no doubt right now. Leave no doubt about your commitment to our team," head coach Will Muschamp said.

While senior Jake Bentley started the game, he saw limited playing time. Redshirt freshman Dakereon Joyner and freshman Ryan Hilinski were at the quarterback position for most of Saturday's game.

Both Hilinski and Joyner brought the Gamecocks into the red zone on their drives, starting the game with Joyner's drive ending in a field goal from Parker White, putting the black team ahead by a score of 3-0.

Hilinski was brought in afterwards, but the drive ended in a missed field goal by White.

The first half was dominated by defense, with only 10 combined points at halftime, as the garnet team lead the black team by a score of 7-3.

During halftime, White was honored with a video as he was officially put on an athletic scholarship. Coach Will Muschamp said after the game that White was one of the most deserving players on the team.

The second half saw more from the offense, highlighted by a pass from Bentley to Deebo Samuel, who declared for the NFL draft at the end of last season. Later in the third quarter, Joyner completed a pass to Jay Urich for 62 yards, which was the longest play from scrimmage.

Muschamp said he was overall pleased with how the team played on Saturday, emphasizing the team's mantra going forward as they prepare for the 2019 football season.

The Gamecocks concluded spring practice on Saturday. They will practice throughout the summer before kicking off the 2019 season in Charlotte against the North Carolina Tar Heels.