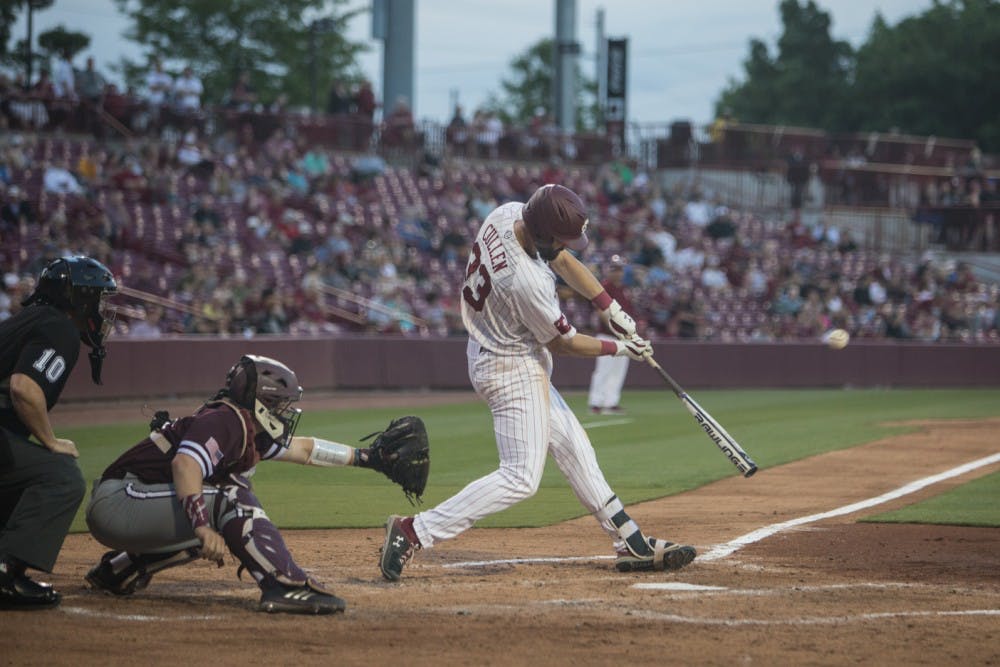 South Carolina baseball pulled out to an early lead before falling to the Texas A&M Aggies on Thursday night 8-2 in the series opener.

Starting junior Reid Morgan of the Gamecocks and junior John Doxakis of the Aggies squared off in what started as a pitching duel.

The Aggies were the first team to put a run on the board. In the second, the Aggies pushed across a run on an RBI single by freshman Ty Coleman.

South Carolina's offense was quick to respond and get its starting pitcher a lead.

In the bottom of the third, Chris Cullen reached on a single for South Carolina's first hit of the night against Doxakis. Cullen advanced to second on a passed ball, and George Callil drove him in to tie the game at 1-1.

The next batter, TJ Hopkins, drove in Callil with a single to put the Gamecocks out in front, 2-1.

In the bottom of the third, South Carolina loaded the bases with two outs. The threat was stifled by Doxakis, however, and the Gamecocks were unable to take the lead.

Head coach Mark Kingston said the Gamecocks struggled to push runs across the plate and the inning affected morale.

"We had a really good inning going there," Kingston said. "We felt really good about the momentum of the game at that point, and it ended with a groundout and it took a little bit of steam out of us."

After the second inning, Morgan tossed seven strikeouts on the night.

Coming into the matchup, Doxakis was sixth in ERA in the SEC and 12th in strikeouts. He held the Gamecocks to their two runs, pitching a slider that caused several strikeouts, until he was pulled in the bottom of the seventh inning.

The offensive stalemate broke in the seventh. With Morgan still out on the mound, he gave up three runs, giving the Aggies a late 4-2 lead.

Morgan finished the night with a line of 6.1 innings pitched, surrendering 4 runs — 3 of them earned — on 8 hits and 7 strikeouts.

After Morgan was pulled, John Gilreath took the mound. Texas A&M loaded the bases against Gilreath.

With two outs, up came Texas A&M's Logan Foster. He launched a grand slam deep to left, extending the Aggies' lead to 8-2 and giving them the win. The blast was Foster's third home run of the year.

"We've been taking a lot of body blows," Kingston said. "But we're not going to back down. We're going to keep fighting."

South Carolina will play game two of the series against Texas A&M on Friday at 7 p.m.