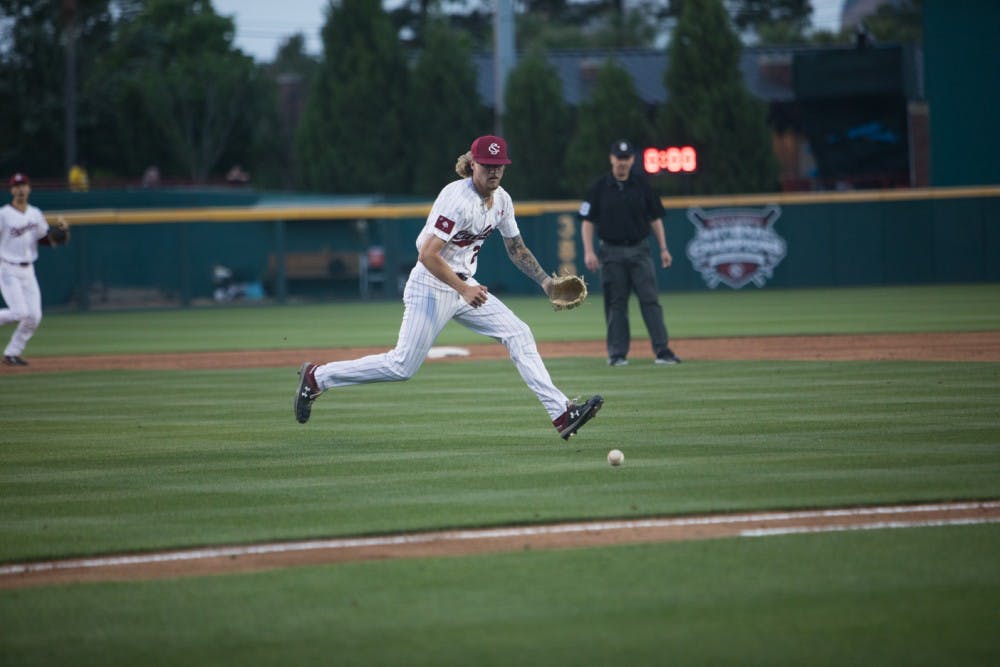 By Cam Adams , and Nate Shirley

The South Carolina baseball team (23-17, 5-13 SEC) split Saturday's doubleheader against the No. 7 Texas A&M Aggies at Founders Park by winning the first game 2-3, then dropping the second contest 6-3.

In game one of the doubleheader, sophomore right-handed pitcher TJ Shook finished his day with three strikeouts and allowed the only two runs by the Aggies in the second inning of his four innings of play.

Texas A&M (29-12-1, 11-5-1 SEC) was able to get its two runs in the second off of a leadoff homer by junior outfielder Logan Foster to right field and an RBI single by freshman infielder Hunter Watson to score sophomore outfielder Zach DeLoach from second.

However, this did not happen before redshirt sophomore catcher Luke Berryhill sent a three-run homer to right-center field to put the Gamecocks on the board first.

After the second inning, the game would then turn into a pitching duel between Shook and Aggies sophomore left-handed pitcher Asa Lacy.

Lacy, who entered Saturday’s first game with a solid 1.97 ERA with a 6-2 record on the mound, only allowed the Gamecocks one hit after the Berryhill bomb and recorded a total of six strikeouts in the afternoon.

The South Carolina pitching staff still held the Aggies to minimal scoring opportunities as Texas A&M was unable to get a runner in scoring position for the rest of the ballgame.

The Gamecocks were able to accomplish this late in the game with the help of freshman pitcher Brett Kerry, who came in to pitch during the fifth inning in relief of Shook.

The right-handed pitcher finished his day with a total of four strikeouts and allowed only one hit during his time on the mound, including three strikeouts in the final inning to secure the 3-2 win for the Gamecocks.

The second game of the day was also the final game of the three game series, which was now tied at one win a piece for both ball clubs.

Freshman right-hander Cam Tringali was given the start for the Gamecocks; meanwhile, the Aggies elected to go with sophomore right-hander Christian Roa.

Tringali pitched through four and one third innings, giving up four runs on six hits, including a solo shot off the bat of Aggies left fielder Cam Blake. He also struck out five batters and did not allow a single walk.

Freshman left-hander Dylan Harley took over for Tringali. Harley pitched two innings and allowed only one earned run, despite not giving up a hit. He also had three strikeouts and one walk.

The Gamecocks entered the bottom of the sixth inning down 4-1, but an RBI double by Chris Cullen and a bases loaded walk by Noah Campbell brought the score within one point going into the seventh and final inning of the ball game.

Harley started the top of the seventh inning, but was pulled after getting the first out of the inning and walking a batter in favor of closer Brett Kerry, who had already thrown 51 pitches in the early game.

Kerry sat down the first batter he faced, but the second batter did not have the same fate. Kerry hung a slider and Bryce Blaum did not miss it. He launched a two run homer to push the Aggies lead to three.

Cole Ganopulos called on to record the final out and he delivered, striking out the only batter he faced.

Kasey Kalich came in to close the game for the Aggies and picked up his tenth save of the year, shutting down middle of the lineup.

The Aggies took the second game and the series with a 6-3 victory of the Gamecocks.

Head coach Mark Kingston said after the game that the entire team is “giving us everything they have” but “there is not an area that I am happy with.”

Kingston knows that the team needs improvement, especially considering the team is now 5-13 in conference play. He said that “work in every area of the program” is how the team can see that improvement.

Catcher Luke Berryhill echoed this sentiment by saying the team has to “move forward”. He also said that as a team they need a “better approach” at the plate to help cut down on strikeouts and give the team more hits, both areas they have struggled in this season.

The Gamecocks now look forward to a neutral site game to be played at North Augusta against Charleston Southern University, followed by an away series at Missouri.