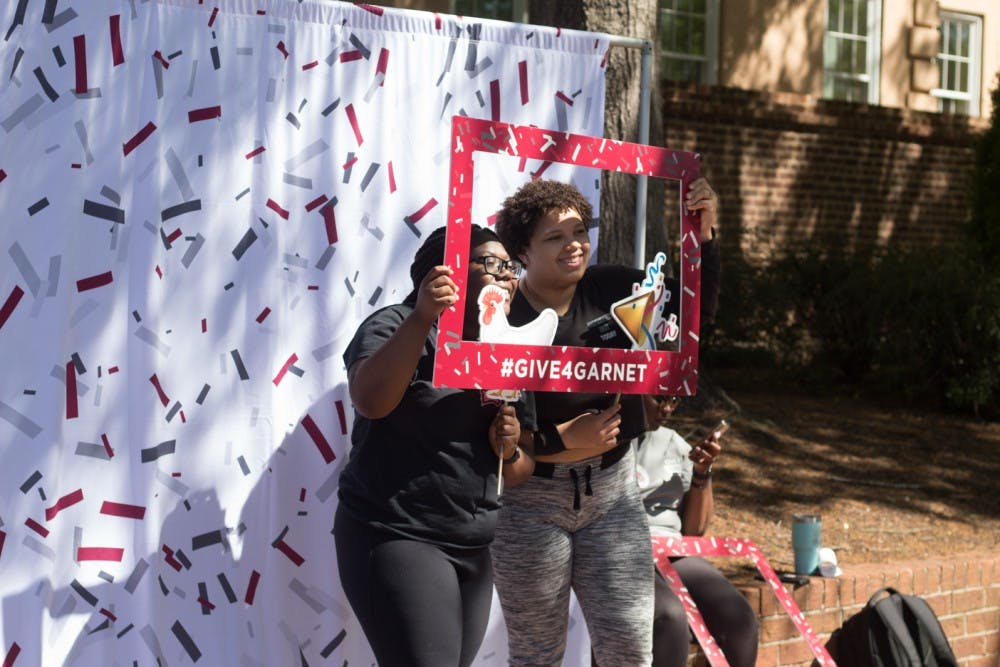 Gamecocks gathered on Greene Street on Wednesday afternoon, raising money for Give 4 Garnet among selfie stations and tables featuring games and giveaways.

Give 4 Garnet is a single-day campaign that encourages all UofSC friends and family to help the university reach its goal of 6,500 Give 4 Garnet donors.

“Every little piece helps, it doesn’t matter the dollar size. Just being able to contribute something is what really matters,” said Elizabeth Muth, who was volunteering through the alumni association.

Donations can be made by visiting the Give 4 Garnet website, which features several different campaigns. Each campaign caters to a different project or need in the South Carolina community, allowing donors to give to the projects they find the most meaningful.

Many of the tables at the event featured some of these campaigns and projects, including the Pastides Initiative for the Alumni Center, the senior class legacy and Palmetto College — which President Pastides and First Lady Patricia Moore-Pastides donated to as well.

“It makes us more accessible to everyone. Not everybody can afford to come to Columbia and live four years here,” Moore-Pastides said.

While there were people milling around many of the different tables at the event, the main attraction seemed to be the petting zoo. The appeal of the baby pigs, goats, bunnies and more was too much for many students to resist.

This was true for second-year exercise science student Julianna Golembiski and second-year public health student Ashley Rhoades. When asked why they had chosen to attend the event, they both had the same answer: “We saw the goats.”

Despite the diversity of the different campaigns and activities at the event, one of the main objectives of Give 4 Garnet is uniting the global Carolina family in order to give back to the community. For Raegan Brizek, a second-year broadcast journalism student and president of Carolina Productions, this is where the importance of Give 4 Garnet lies.

“I think it’s important that we acknowledge our community and that we give back to them, especially because we are everywhere, we are a spread-out campus," Brizek said. "It’s important to keep these community ties.”