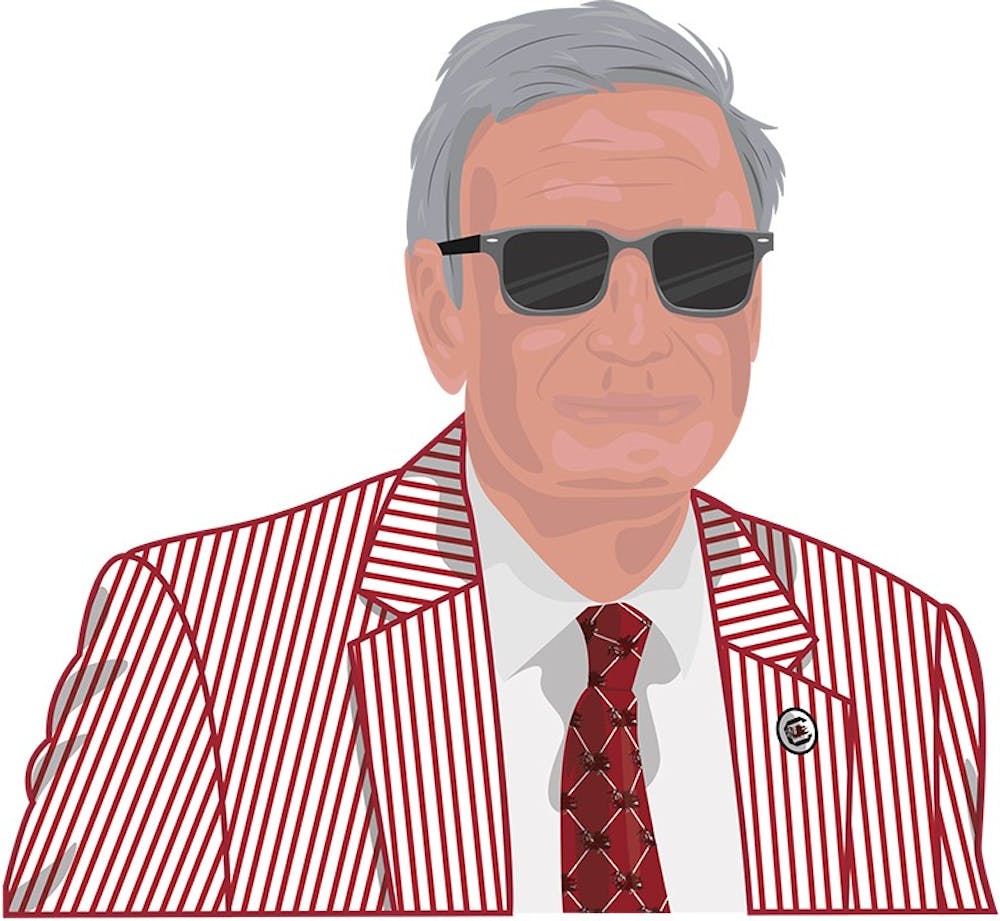 Pastides moves on after 11 years as president

Harris Pastides will leave the University of South Carolina this year after serving as university president for 11 years.

Pastides announced his retirement at the State of the University address in October 2018 alongside his wife, Patricia Moore-Pastides.

“I have no doubt that USC is in a strong position now to recruit an able leader who has all the right stuff to take the reigns and hopefully to accelerate our progress,” Pastides said.

The couple looks forward to spending more time with their family, and Moore-Pastides has plans to spend the next year writing.

Still, Pastides said he will miss getting to know students.

“When we weighed the importance of more family time, it was always counterbalanced by leaving the students," Pastides said. "So I want them to know that I want to make the most of my remaining months of my tenure and they’ll always be first and foremost in my heart.”

Over the years, both Pastides and his wife have invited students into their home and worked to intentionally connect with students across campus.

“I loved when Dr. Pastides and Mrs. Pastides come and talk to us,” said Kat Gerrity, a third-year Spanish and international studies student. “It’s really cool to see them be so involved in our campus, and it really affects the whole community, it just makes everybody really happy to see them want to be involved with the students.”

During Hurricane Florence, Pastides was supposed to speak at the annual State of the University address. When the event was canceled due to inclement weather, Pastides' invited students to a pizza party so they could get to know their president and his wife.

“I hope this conversation won’t be about school, but about life and things and get to know each other better,” Pastides said. “And you know why not, as they say, make lemonade out of lemons?”

The President's House opens every Halloween to students for trick-or-treating. Students show up to the house dressed up to join the president and first lady, also donning costumes, in a Halloween party. Moore-Pastides invites different student organizations to help her plan and host the event.

“We’ve done this every year I think since Harris became president, so this is our ninth year, and we just think it’s a way to have some good, clean fun on Halloween,” Moore-Pastides said at the 2016 event.

Patricia Moore-Pastides has worked as the first lady of the university for the past 11 years.

In 2017, Moore-Pastides wrote her book "At Home in the Heart in the Horseshoe," which discusses the lives of past presidents who lived in the President's House.

"I feel like part of a legacy, that has a long, long history,” Moore-Pastides said. "I feel like the book would make a nice remembrance for graduates."

During her time as first lady, Moore-Pastides has taught a Healthy Mediterranean Cooking class to students and worked to further sustainability at the university through gardening and education.

"I really have a heart for our students," Moore-Pastides said. "And I want to go out trying to be as uplifting as possible to all our students, to have them recognize that they're all worthy."

Work at the university

One high point of Pastides' presidency was the Carolina Promise, a $1 billion campaign meant to help USC complete future projects.

At the 2015 State of the University address, Pastides announced that the Carolina Promise total was $1.043 billion. He said the money provided for Carolina 2025, an initiative that would radically change life at USC.

“I remember eyebrows being raised when we contemplated and then announced the goal,” Pastides said. “But I also knew that we had a great case to make, that we could pull together a great campaign committee, that non-alumni would contribute and that everyone wants to be on a winning team.”

While fundraising for the university, Pastides also negotiated with state legislators on tuition increases and state funding.

In 2016, Student Government and Pastides both spoke on behalf of the university to shed light on the importance of higher education and the funds universities receive from the state.

Pastides also aimed to combat racism and bigotry during his 11 years at USC.

After racist posters were hung in Gambrell Hall in spring 2018, Pastides held a #NotOnOurCampus rally to condemn racism and bigotry on campus and to emphasize the importance of inclusion and equity.

“I say that racism will not be tolerated at the University of South Carolina,”  Pastides said. “When university policies are violated, you will be held accountable by our equal opportunity program and student conduct office.”

In recent years, USC has begun reconciling its past. A plaque was place on the Horseshoe in 2017 honoring the slaves who built and worked at the university, and in 2018 a statue of the first African American professor, Richard Greener, was unveiled next to Thomas Cooper Library.

In 2015, Pastides announced he would work with John Dozier, chief diversity officer, on a new initiative to address racial issues called South Carolina Collaborative on Race and Reconciliation.

Not all students were content with this new initiative, because they believed it focused only on speaking out against racism instead of actively working to prevent racism. Student organization USC 2020 led a walkout on Nov. 16, 2015 at Longstreet Theatre to protest Pastides' initiative.

"Despite our efforts to spur committee action, provide our own programming, and advocate for our needs, we have seen few substantial changes in university policy or practices," said an open letter to Pastides from USC 2020. "Therefore, we have yet again taken it upon ourselves to enact change at our university."

“During Pastides time here, he has been very responsive to race-related issues that have come up,” co-presidents Kaelyn Heyward and Wayne Russ said in a written statement by the NPHC. “He truly believes that students from every background should be able to proudly call the University of South Carolina ‘home.'”

“It’s great to have a president who really showcases the value of a school and stands for all groups of students,” Lateef said. “I feel like the new president definitely has big shoes to fill.”

Pastides celebrated 10 years as USC's president fall 2018. He began as the dean of the Arnold School of Public Health in 1998, 10 years before being selected as president.

In honor of this anniversary, there was a celebration at the weekly Health Carolina Farmers Market to mark Pastides' contributions to the university, particularly those related to sustainability.

Pastides delivered his 10th State of the University address, which not only discussed the growth of the university in the past decade, but also addressed how he hoped the university would grow in the next 10 years.

"No one can guess what the world will be like a decade from now, in the same way I could not fully predict ahead from August 2008," Pastides said in his remarks. "However, I can assure you that ten years from now, in 2028, our university will be different and better than today...stronger and more impactful. Because we must be."