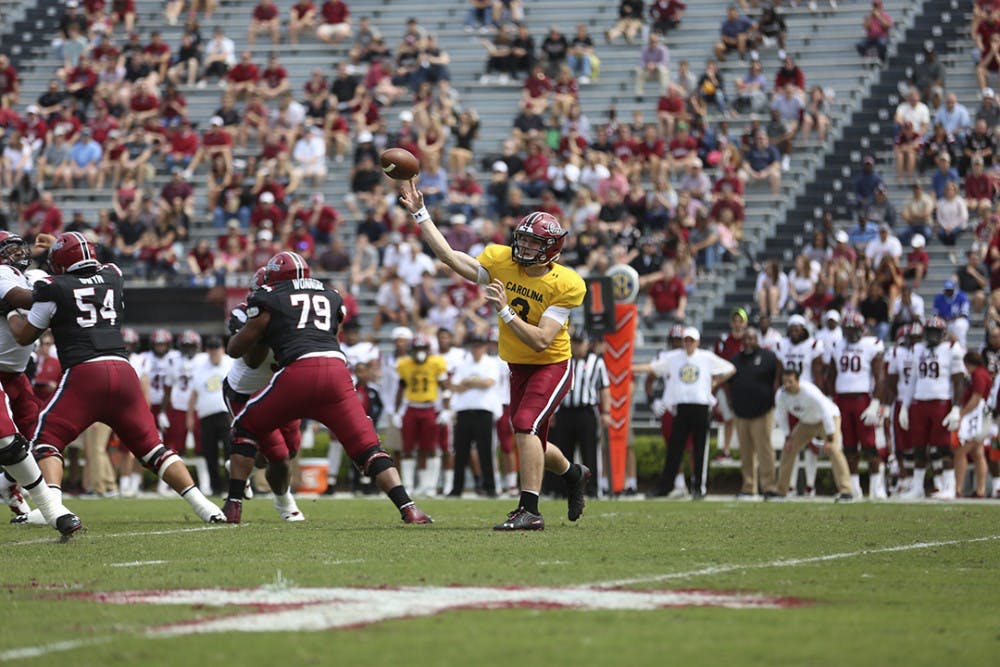 The annual Garnet & Black Spring Game is a time for head football coach Will Muschamp and the Gamecocks to find out what they have in their freshman class heading into the 2019 season.

But the impact of the game goes beyond the current freshman. On the sidelines of the spring game, prospects for the 2020 class and onward looked on as the Gamecocks continued an important recruiting stretch during the offseason.

The spring game was held in Columbia at Williams-Brice Stadium this past Saturday. By having future prospects take a glimpse at what Muschamp is building in Columbia, the combination of the present class and those to come gave Gamecock fans plenty to be excited about for the future of Gamecock football, both on the field and on the sideline.

On the field, freshman quarterback Ryan Hilinski impressed with his throwing accuracy. Hilinski took over first-team reps on the third possession of the game and completed his first eight passes, standing out as one of the top players from the 2019 recruiting class. He went on to finish the day by completing 24 of 36 passes for 206 yards.

Hilinski headlines a 2019 class that mostly features defensive talent. Apart from Hilinski, five of the top six players in South Carolina's class are on defense, including the only five-star player, Zacch Pickens.

Muschamp spoke of the importance of the spring game for his freshman players.

"Today was a huge day," Muschamp said. "It's their first time in the in the stadium, and we did that purposefully to understand, especially when you come over here and play."

In making his current freshman feel special about playing for the Gamecocks, Muschamp gave that feeling to future recruits as well. For as much excitement as there was on the field, those who were on the sidelines gave Gamecock fans another reason to hope for a bright future.

Burch attended Hammond High School right here in Columbia. He currently ranks as the No. 8 prospect in the 2020 class and No. 1 in both strong-side defensive ends and South Carolina prospects.

Burch, a five-star recruit, is one of the Gamecocks' most important prospects this offseason. Adding the top in-state recruit to a deep defensive front would be huge for a defense that was in the bottom of the SEC in sacks last season.

South Carolina will have plenty of competition on its hands, however, as several big-name programs are in the running for Burch. Clemson is believed to be out in front of Georgia, Alabama, Duke and South Carolina.

In recent weeks, Burch has given the Gamecocks some hope that he will pick South Carolina. His presence at the Garnet & Black Spring Game marked his second visit in two weeks and his fifth overall visit. Despite Clemson weighing in heavily for Burch, his five visits to South Carolina are the most out of any school that has offered a scholarship to the defensive lineman.

Along with Burch, another big name visited the South Carolina campus in the week leading up to the spring game.

Four-star running back Tank Bigsby was on campus the Saturday before the spring game. Bigsby, highly sought after by several teams, rushed for over 2,000 yards in his final season for Callaway High School in Hogansville, Georgia.

Bigsby's recruitment is telling of the recent struggles for the South Carolina running game. There hasn't been a 1,000-yard rusher for the Gamecocks since Mike Davis in 2013.

Having two top-50 recruits on campus in the week leading up to the spring game is a great sign for Muschamp, who has had success with recruiting during his time as the head of the Gamecocks' football program.

Since joining the program in 2015, all of Muschamp's recruiting classes have been ranked in the top 25 nationally. The importance of a top recruiting class is key in keeping up with the SEC, as the conference consistently represents a majority of the top classes in the country.

To keep that streak alive for the 2020 class, the Gamecocks are hoping to add Burch and Bigsby to a 2020 recruiting class that ranks No. 8 in the SEC and No. 21 in the country.

The presence of so many talented prospects in Columbia in the recent weeks has inspired plenty to look forward to with the coming classes of Gamecock football. And, with the spring game arriving during the same period, the 2019 class was finally able to experience what it's like to play for the Gamecocks at Williams-Brice Stadium.

To create that hope with so many potential Gamecocks in attendance speaks to Muschamp's ability to recruit talent to South Carolina. In such an important stretch of recruiting during this football offseason, the future sure looked bright for the 2019 and 2020 recruiting classes.