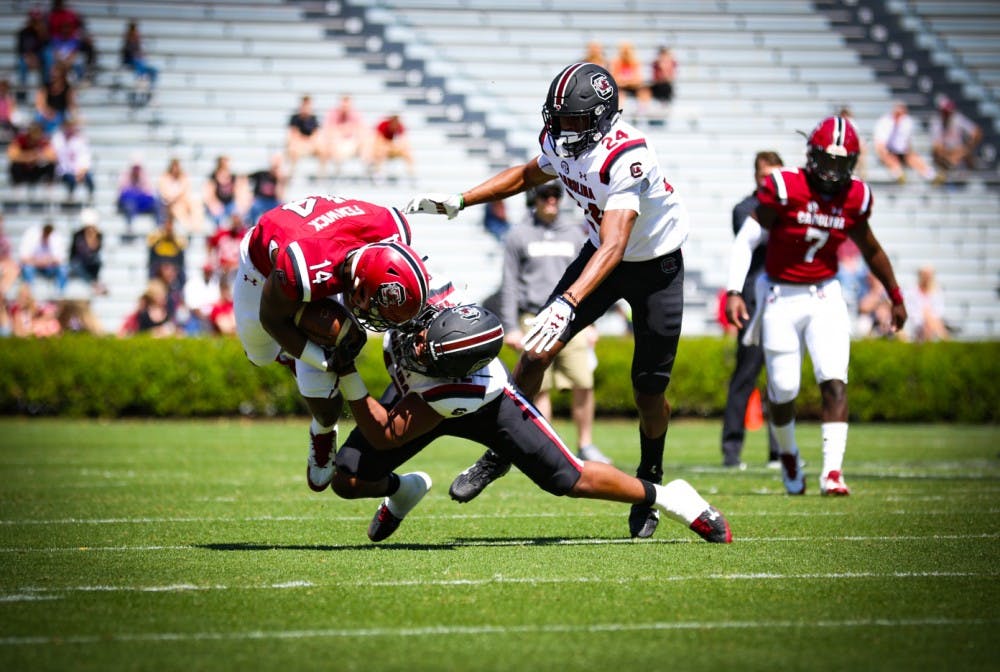 Column: What to look for at the Garnet & Black Spring Game

This Saturday, fans will be able to see Gamecock football in action for the first time since its shocking 28-0 defeat versus Virginia in the Belk Bowl.

With some players coming, some players leaving and many position battles unclear, this is set to be one of the most important Garnet & Black Spring Games in years.

On that note, here are some key questions going into this year’s game.

Who will be the Gamecocks' backup quarterback?

Jake Bentley is prepared to enter the 2019-2020 season as the starting quarterback, but it has been evident that his leash is only getting shorter.

After redshirt senior Michael Scarnecchia passed for 249 yards with three touchdowns and no picks on road to South Carolina’s only win against a ranked team last season, although Missouri wasn't ranked at the time, real pressure started to pile on Bentley’s shoulders for the first time during his tenure at South Carolina.

Fans started calling for the benching of Bentley, and although his play against Clemson shut many fans up in that regard, doubt came back after the bowl game.

The reason the backup role is so pivotal is because if Bentley has a rough start to the year or gets injured, he could lose his job to any of the hyped up, capable backup quarterbacks.

Head coach Will Muschamp, who met with reporters after the second Saturday spring scrimmage, said all four quarterbacks have received work with the first-team offense over the last month.

Although the deadline to make a decision isn’t until August, this week’s spring game will provide a good sneak peek into the decision being made.

However, many believe the front-runners for the gig are Joyner and Hilinski, who were ranked 206 and 64 overall in the country, respectively, coming out of college.

Although both are deserving of the job, only one will be able to claim it and with that, possible time running the show at the college level.

Will Shi Smith be able to fill the void left by Deebo Samuel’s departure?

With wide receiver Deebo Samuel declaring for the NFL draft, junior Shi Smith is the next man up. Although similar in size, with Samuel being 5 feet, 11 inches tall and Smith being 5 feet, 10 inches tall, and style of play, it will be undoubtedly hard to duplicate the explosiveness and game-changing ability of Samuel.

In the Gamecocks' biggest game of the year, Samuel caught 10 balls for 210 yards and three touchdowns against Clemson and single-handedly put the team on his back, accounting for 21 of its 35 total points.

Is it fair to expect Smith to even slightly fill that kind of a hole next year? No, but it is worthwhile to note that they play a similar game.

Samuel started his South Carolina career in the slot, where he flourished, and moved to the outside for the majority of last season. That is the same position Smith will likely be in this year after losing wide receiver Bryan Edwards to the NFL draft as well who manned most of the outside sets with Samuel last year.

After catching 45 balls for 673 yards and four touchdowns last year, Shi Smith will look to improve on his already impressive numbers with a bigger role in the offense.

Although there are more questions than answers at this point, one thing seems certain: it’s not going to get worse.

After finishing 12th, 11th and 10th in SEC rushing over the last three seasons, Muschamp added former assistant coach and star running back of Georgia, Thomas Brown, to his staff as a running backs coach. He has helped produce running back talent at Georgia such as Nick Chubb and Sony Michel and hopes to bring that same success to South Carolina.

South Carolina has shifted to more of a pass-heavy offense over the past few years, and they hope to rekindle a fire at the running back position they haven’t truly had since Marcus Lattimore.

When you look at South Carolina’s situation in the backfield, attention quickly shifts to senior Rico Dowdle. He appears to be the team's most capable runner, but injuries and inconsistency have held back his potential.

Following the Gamecocks’ game against Tennessee last year, Dowdle all but disappeared from the running game, with fellow running backs Mon Denson and A.J. Turner carrying the bulk of the load for the rest of the season.

Dowdle has been sidelined for most of the spring workouts with a groin issue dating back to last year. So, that could be partly to blame for his lack of success down the stretch.

For South Carolina, there are three running backs and one lead job, assuming they go in that direction. Will they go for a three-headed monster game plan? Will one break away from the pack? Will a new name surface? The spring game should be able to answer all of those questions based on the work they see this weekend.

The Garnet & Black Spring Game will be played at noon Saturday, April 6 at Williams-Brice.