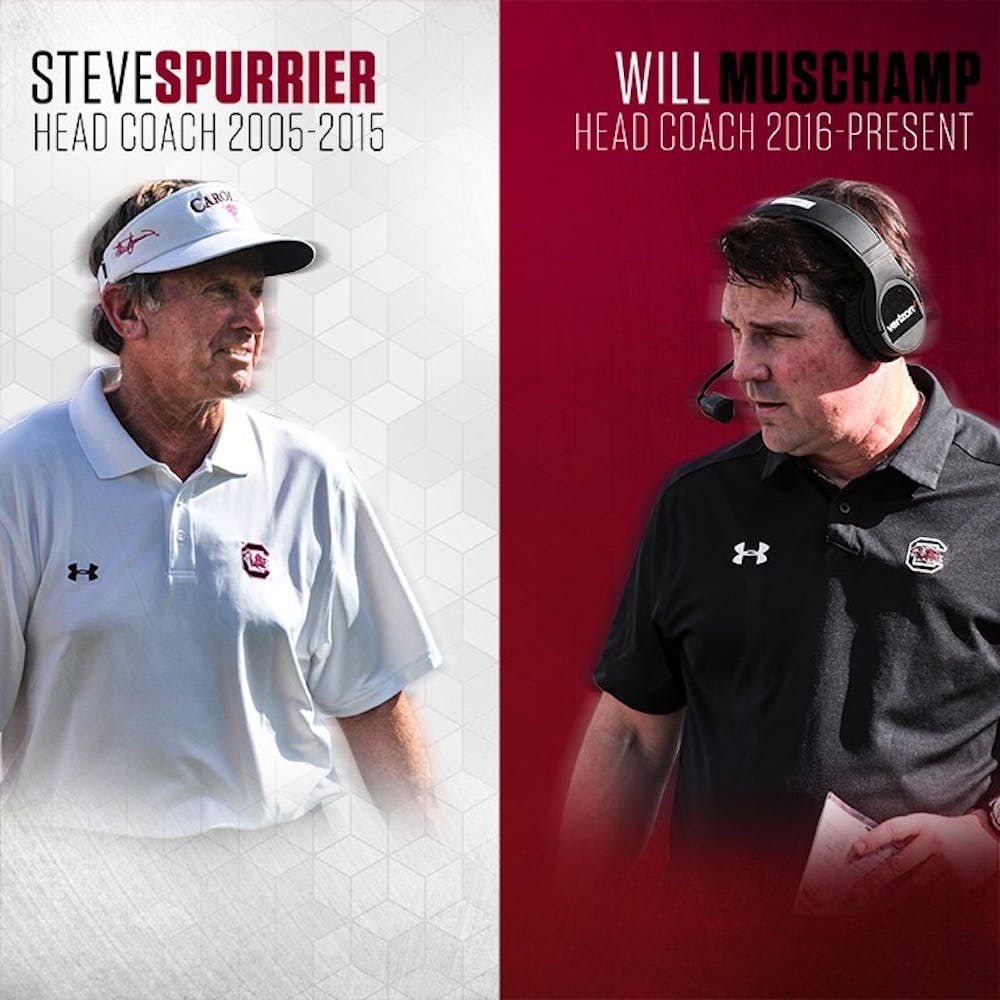 Changing of the guard: Muschamp enters as Spurrier leaves

From 2005 to 2015, head coach Steve Spurrier roamed the sidelines of Williams-Brice Stadium and broke a laundry list of school records.

Spurrier won 86 games in the garnet and black, highlighted by three straight 11-win seasons from 2011-2013, the school record for most wins in a single season.

The Gamecocks also won five bowl games during Spurrier's time in Columbia. Before he arrived in 2005, the Gamecocks had only won three.

South Carolina had never beaten Tennessee or Florida on the road before 2005. During Spurrier's time, the Gamecocks won in Tennessee and Florida two times each. When the Gamecocks beat the Gators in 2010, not only was it for the first time ever in Gainesville, but it also clinched South Carolina's first and only SEC East title.

The first win against a No. 1 team came during in 2010 when South Carolina beat Alabama at Williams-Brice, 35-21— Gamecocks' only win over a top-ranked team.

But on Oct. 13, 2015, all of that came to an end. Following a 2-4 start to the season, Spurrier stepped down mid-season as the head coach after nearly a decade.

"If it starts going south then I need to get out," Spurrier said at his final press conference. "You can't keep a head coach that's done it as long as I have when it's headed in the wrong direction."

With a legendary coach resigning mid-season and the worst season since 1999, Gamecock fans asked themselves, 'Now what?'

Fortunately for them, that question was quickly answered.

After the 2015 football season, the South Carolina football program found itself at a crossroads.

Steve Spurrier, who broke nearly every school record from 2005 to 2015, abruptly resigned in the middle of the season. When interim head coach Shawn Elliott took over, the Gamecocks finished the year 3-9, including a 23-22 loss to FCS squad The Citadel at home.

In one of the lowest points of the program's history, the Gamecocks were left to lick their wounds and find a new head coach. On Dec. 7, 2015, they found one in Will Muschamp.

Muschamp, who was head coach at Florida from 2011 to 2014, was met with criticism when he was hired. He had a 28-21 overall record in his four seasons at Florida. Ironically, he was fired after losing to South Carolina in 2014 in Gainesville, Florida.

In the first half of the 2016 season, many believed Muschamp was on the same track as he was at Florida.

The Gamecocks won their opening game against Vanderbilt 13-10, but were otherwise inconsistent. For the second year in a row, they started 2-4 through the first six games. The Gamecocks had a senior quarterback in Perry Orth, but Orth was also inconsistent.

The Gamecocks were looking for a spark at the quarterback position. To do that, they took their chances with freshman Jake Bentley, who won his first start by a score of 34-28 against the UMass Minutemen.

On Oct. 29, 2016, the Gamecocks defeated the Tennessee Volunteers 24-21 for Muschamp's first win over a nationally ranked team as the South Carolina head coach.

The Gamecocks would finish the season 6-7 with a loss to the University of South Florida in the Birmingham Bowl. While it was a second-straight losing season, the Gamecocks were an upward trajectory with a win over a major SEC East rival and returned to the postseason after a year-long hiatus.

Muschamp continued to improve in his second year with an 8-4 record, highlighted by wins over North Carolina State, Tennessee and Florida. In the Gamecocks' second-straight bowl game, they defeated the Michigan Wolverines in the Outback Bowl 26-19, despite being down 19-16 in the third quarter.

Expectations in Columbia were at an all-time high heading into the 2018 football season. South Carolina was even considered a dark-horse candidate to win the SEC East division.

But after a 41-17 loss to Georgia in week 2, South Carolina's week 3 game against Marshall was canceled due to Hurricane Florence. As a result, the Gamecocks had an early and unexpected bye week, as they eventually scheduled Akron on Dec. 1 to make up the missed game from earlier in the season.

South Carolina only won back-to-back games once, when they beat Tennessee and Ole Miss consecutively. At the end of the season, they were decimated by injuries which resulted in losses to Florida and Clemson on the road.

To end the season, the Gamecocks were invited to the Belk Bowl, but were shut out by the Virginia Cavaliers 28-0, ending the 2018 season with a loss.