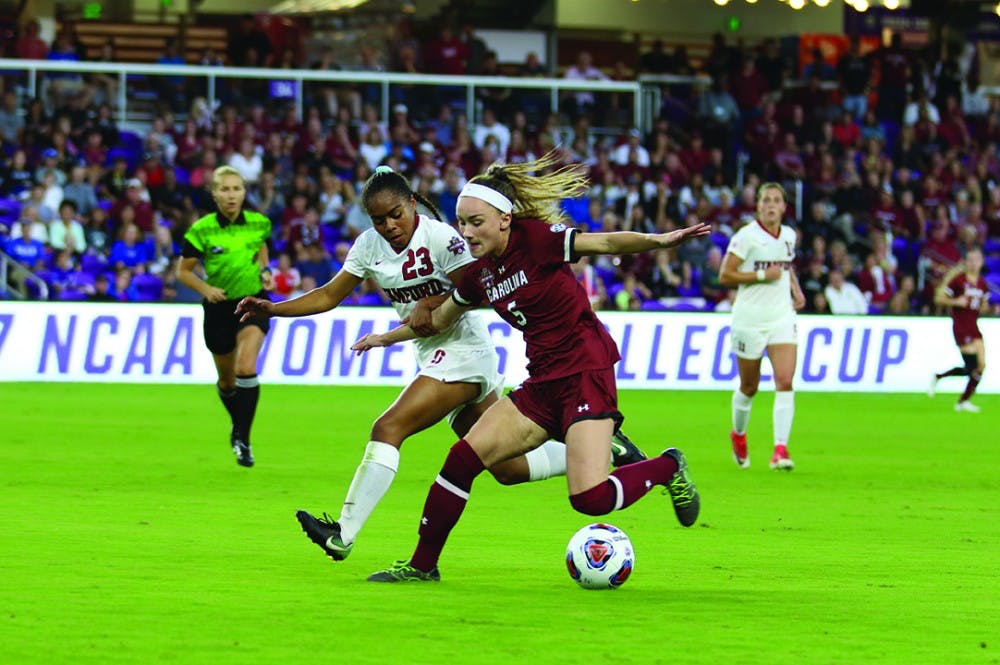 That same year, the program reached a new milestone: It was the first time in its 23 years that a Gamecock women's soccer team had ever reached a Women's College Cup with a 2-0 victory over the Florida Gators.

Senior Lindsey Lane was a dominant force on South Carolina's pitch in this game and the rest of the games under the lights at Stone Stadium.

In the 13th minute of the game, Lane sent a corner kick into the box, which met the waiting head of sophomore Grace Fisk for the first Gamecock goal of the match.

"We were practicing corners a lot this week, and I was just trying to hit the back side of the six [yard box]," Lane said. "Gracie came through and got her head on it and put it in that spot that was hard for the keeper to get to."

In the 77th minute, Lane decided she wanted a goal of her own and took a shot outside the penalty box to score a goal and secure her team's ticket to the Women's College Cup.

Besides a solid offense, the Gamecocks had a strong defense in the 2017 season. Sophomore goalkeeper Mikayla Krzeczowski's shut out was her fourth in that tournament alone. Including the Florida game, it had been over 400 minutes since the Gamecocks were last scored on that season, the last having been in the upset loss to Arkansas in late October 2017 in the first round of the SEC tournament.

Gamecock Head Coach Shelley Smith said she thought the 2017 Gamecock squad had "one of the best defenses in the country."

In Orlando, the 2017 Women's College Cup location, the Gamecocks faced Stanford in the Final Four. They knew they would face tough competition, but were hopeful due to the fact that Stanford's single loss that year had been to Florida.

South Carolina's run at the championship ended with a fall to the Stanford Cardinal 2-0. However, making it to the Women's College Cup was an achievement for the team, program and university.

Women's soccer had a strong showing in 2018 too, making it to the Sweet Sixteen. Coming off two strong seasons with postseason runs, the Gamecocks will look to continue their postseason streak in 2019 and clinch their second Women's College Cup in three years.