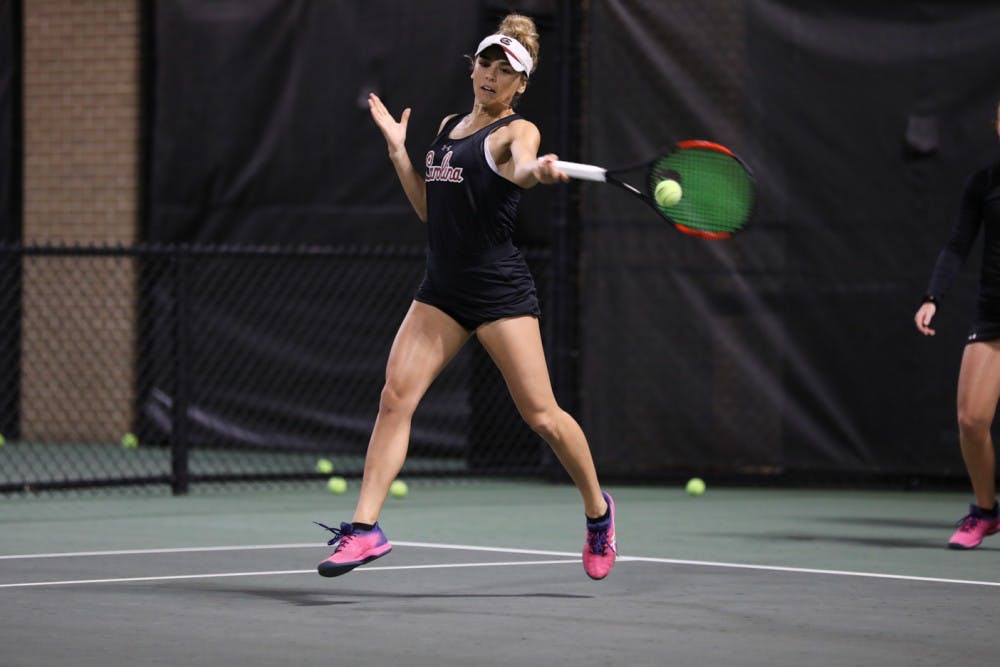 The No. 2 Gamecocks women’s tennis team has earned a double bye in the SEC tournament after finishing the regular season with a 12-1 SEC record.

South Carolina ended the regular season on a seven-game winning streak after defeating the No. 26 Florida Gators, 4-2.

The Gamecocks finished second in the SEC behind the undefeated Georgia Bulldogs. The No. 2 Bulldogs were named the No. 1 seed with an undefeated 21-0 record.

South Carolina senior Paige Cline said the Gamecocks have had an incredible season without focusing on national rankings.

“It’s really kind of just coming into who we are, and our identity and just our values as a program,” Cline said. “I think we’ve done that really well, obviously, which has translated into our ranking and our results.”

The Gamecocks currently have three singles players ranked in the top 100 of the Intercollegiate Tennis Association's (ITA) singles rankings.

Horvit and Gamarra Martins moved back up to No. 1 while doubles pair Rachel Rohrabacher and Megan Davies fell to No. 37.

“Me and the two other seniors here have really laid down a good foundation, building the proper standards and the proper mindset of how to communicate and what’s expected of everyone,” Rohrabacher said.

Cline, Gamarra Martins and Rohrabacher celebrated their senior day with a 4-0 team win against No. 43 Alabama on April 7.

“I think every year has been different in its own special way, and each year has contributed to the team we are and the program we are to this day,” Rohrabacher said. “I don’t think we would have been here without every person that has been involved along the way.”

The Gamecocks will play their first SEC tournament match in College Station, Texas on Friday at 10 a.m. against the winner between No. 7 Florida and No. 10 Ole Miss.