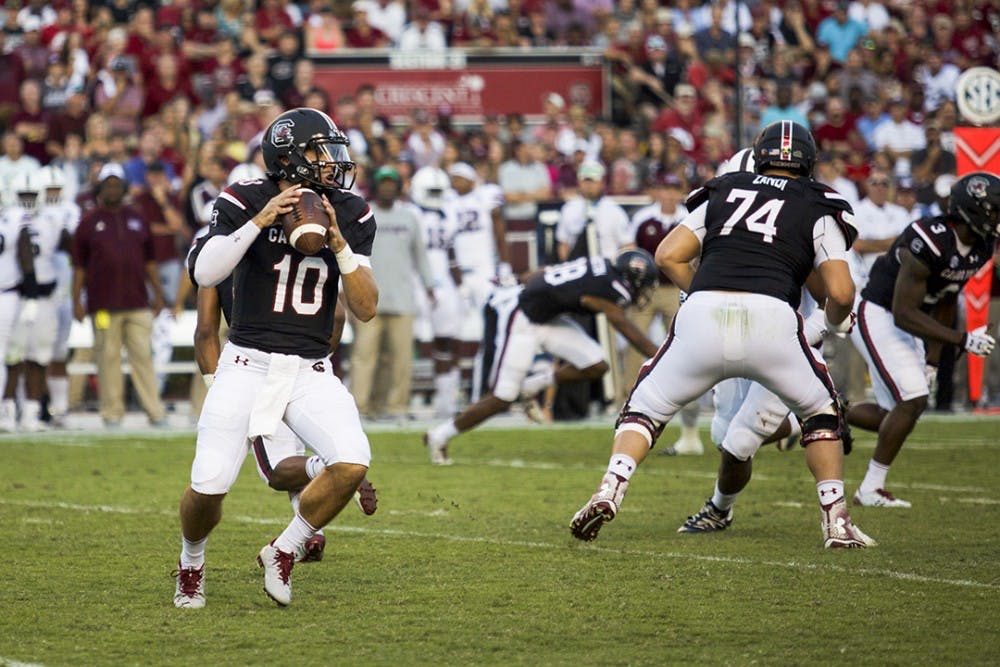 Over three years after graduating from the University of South Carolina, former Gamecock quarterback Perry Orth still has the same values and work ethic as he did when he was on the field at Williams-Brice Stadium.

Orth started as a walk-on at South Carolina in January 2013, and working behind quarterbacks Connor Shaw and Dylan Thompson motivated him to compete for the starting job even more.

While Orth was a walk-on, he worked at a local grocery store stocking shelves to help pay for his education. In the fall of 2015, the special moment came: Orth was officially on scholarship.

“The feeling of getting on scholarship, there really wasn’t anything better,” Orth said. “I remember calling my mom and dad and telling them I was on scholarship and ... just crying and thanking God for the blessing. It was just a day to sit back and reflect on all of the hard work that I had put in over the previous two years.”

Being the starting quarterback for former South Carolina football coach Steve Spurrier is something Orth said he will always hold near and dear to him.

“Coach was a true gem,” Orth said. “He's a living legend ... he taught me in a lot more ways than just football. He taught me that attention to detail and attention to the small things is extremely important. ... His pure competitive edge was something that I carry with me even now.”

Orth's career as a Gamecock saw significant change in his junior and senior years. Spurrier resigned, and co-offensive coordinator Shawn Elliot took over as interim. Orth’s senior year in 2016 was the first year under current head coach Will Muschamp.

“It made for one heck of a transition. Coach Spurrier to coach Elliot really wasn’t that different,” Orth said. “When you’ve been trained a certain way to do things, you really get accustomed to it, and then for your last year, to have everything uprooted and completely changed, it was definitely challenging.”

Over the course of his last two seasons, Orth started 11 games and registered 2,595 passing yards with 12 touchdowns and had 54 carries for 125 yards and two rushing touchdowns. He also had one 17-yard touchdown reception against the Florida Gators.

Additionally, Orth was named a semi-finalist for the 2015 Burlsworth Award, awarded to the nation’s top walk-on football player. He was also a nominee for the William V. Campbell award, which awards the player with the best combination of academics, community service and on-field performance. He received the Harold White GPA Award in 2016.

Another distinctive moment for Orth came in 2016 when he was named captain of the South Carolina football team by his coaches and teammates.

“It was a testament to the work that I put in over my career,” Orth said. “I wanted to show the guys and lead by example of what it meant to be a leader.”

After helping lead the Gamecocks to a bowl-eligible season under Muschamp’s first year, Orth graduated in December of 2016 with a Bachelor of Science in economics and marketing.

Orth also spoke about the progress Muschamp has made with the South Carolina program.

“I think that we're heading in the right direction,” Orth said. “Our recruiting is as good as it’s ever been. Our facilities are probably the best in the country, if not top five. The Muschamp era has been off to a good start for sure.”

Orth’s experiences on the field are not the only thing that has shaped him into who he is today.

He volunteered at the Ronald McDonald House Charities, Epworth Children’s Home and Children’s Chance throughout his time at South Carolina. Orth helped repair houses, spent quality time with underprivileged kids and spent time with families who had children being treated in local hospitals.

“Anytime you have an opportunity to give back to the community, it’s a blessing because you have to understand where you came from,” Orth said. “You were once a kid that was looking up to college athletes and college quarterbacks. ... Being a real guy and a real, genuine person is what it’s really all about.”

Orth says he still volunteers in his free time.

“You get these platforms because of the gift that God's given you, and you're able to impact other people,” Orth said. “Ultimately, that’s really what those athletic talents are for.”

All of these experiences and accomplishments led Orth to become the founder, CEO and head coach of QB1 Athletics, a year-round quarterback training and development business based out of Columbia.

“Originally, it was just something to do on the side after work, just to stay involved in the game,” Orth said. “It turned into a legit business. Once you start coaching the kids and get to know them and figure out who they are ... you really get hooked. ... To be able to be like a big brother to them is pretty awesome.”

Orth says he is motivated and excited to train and develop quarterbacks of all ages. His goal is to help maximize the athletes’ potentials on and off the field.

But that is not all Orth spends his time doing. He is also a property and casualty commercial consultant with Insurance Management Group in Columbia.

“It allows me to get out and about,” Orth said. “It’s a great networking opportunity to meet new potential clients and bond with people that you already do business with."

Even in working with insurance, Orth finds it applicable to his passion for football.

"I find [selling insurance] to be very relative to football, because each and every day you have to compete to win a job," Orth said. "Whether you're throwing a touchdown or closing a deal. Both are great and rewarding feelings."