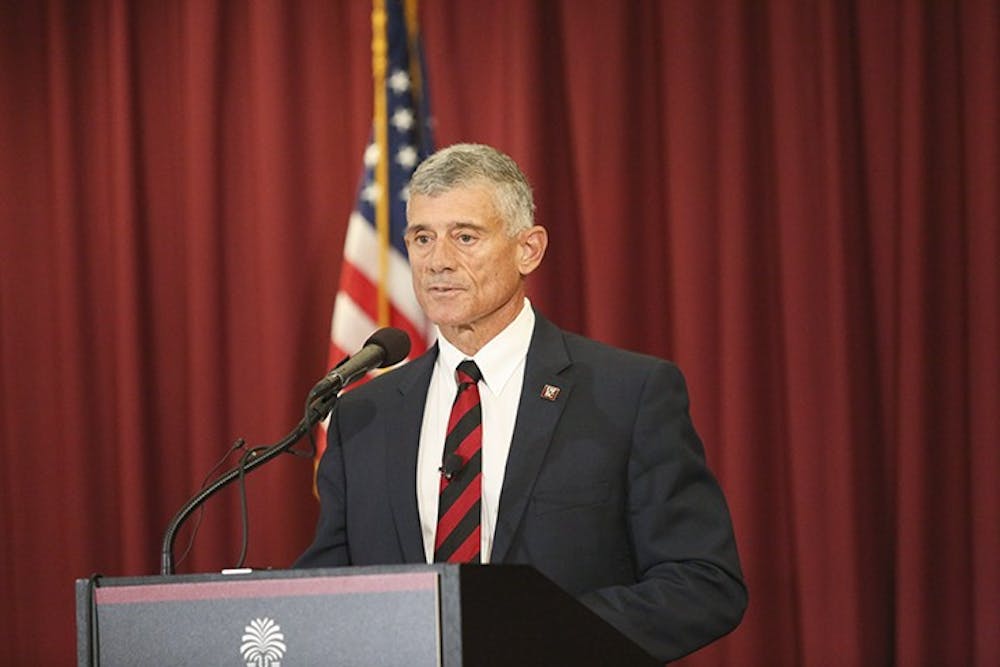 President-elect Robert Caslen held a press conference Tuesday morning where he discussed his controversial election and outlined his future for USC.

"My pledge to all of you is that we will engage, we will listen, we will learn and we will work together to advance the cause of this university and the university system," Caslen said.

After reviewing the overwhelmingly skeptical comments from students, faculty and staff during the original presidential search in April, Caslen said he was humbled. He welcomed the comments and learned from them, particularly that he needs to articulate his statements so they represent exactly what he means, he said.

"When a leader fails to open themselves up to criticism, that leader is only looking at issues from a very narrow perspective, and if you're going to be an effective leader, you have to have the humility to listen and to understand across the entire spectrum of thought," Caslen said.

Another issue Caslen addressed is concern about USC losing its accreditation which is awarded by the Southern Association of Colleges and Schools (SACS). Caslen said he is "very concerned" with losing accreditation and shares some of the same worries as SACS. He mentioned possibly bringing in outside firms to assess the governance of the board of trustees, such as one brought into the University of Central Florida.

The board of trustees has been split since the controversial election last Friday, and Caslen deferred to the chairman of the board, John C. von Lehe Jr., for an answer on how to mend it. Von Lehe said the first step to reconciliation is for the board to meet and begin a discussion on the process that elected Caslen.

"The board members who didn't vote for him, most of those board members voted because of this process which has occurred," von Lehe said. He also said Caslen needs support from the student body and believes he will receive the support.

Regarding his relationship with the student body, Caslen said he wants to make himself accessible to by walking around campus and attending student meetings and events. This included a comment about visiting Five Points at night to experience it from a student's perspective.

"And I'll drink a beer with them," Caslen said.

"If we fail to look like the people of South Carolina, we risk becoming illegitimate in their eyes," Caslen said.

Caslen said he has reflected on the question of returning to USC following the controversy from April until now. He said the reason he accepted the position is his love for education.

Caslen also said prior to the press conference, he sat down with students and discussed student activities, sustainability, the importance of diversity and his sexual assault comments, which some perceived as victim blaming. Caslen said he plans to continue to meet with students, faculty, community leaders and contributors over the next weeks until he takes office on Aug 1.

Luke Rankin, student body president, introduced Caslen at the press conference and said during this meeting with concerned and supportive students, Caslen did more listening than talking.

"I think it shows monuments to his character and what he plans to do," Rankin said.

During his first discussion with Caslen last Friday, they discussed how Rankin could help connect Caslen to students.

"Every one of our stakeholders deserves a voice, and every member of team Carolina should not only feel valued, they should know that they are indeed a valued member of the team," Caslen said.