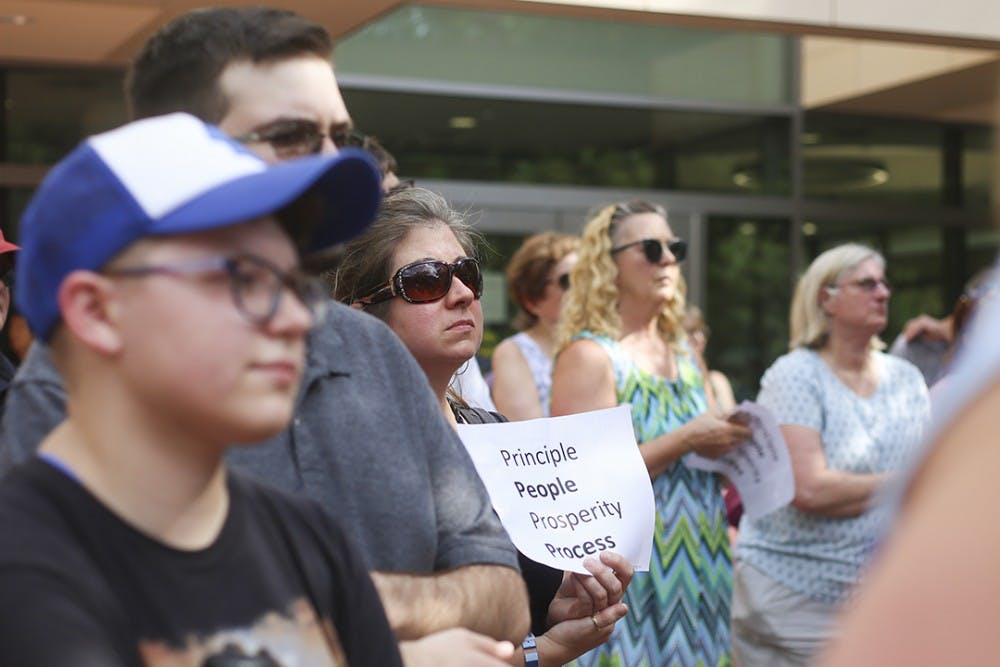 USC faculty, alumni and students stood in nearly triple-digit heat at the Gamecocks4Integrity rally Wednesday afternoon to voice concerns against the upcoming board of trustees meeting this Friday.

Gamecocks4Integrity is a group upset with the process of the presidential search thus far and Gov. Henry McMaster's involvement.

Mayor Steve Benjamin, former State Rep. Bakari Sellers and other speakers at the event expressed frustration at the board’s actions in calling for a vote for Gen. Robert Caslen as USC president and stressed its illegality.

“It’s sad we have gotten to this point, but it’s still fixable, and its only fixable by them choosing not to act on Friday,” Benjamin said after delivering a speech to over 100 attendees.

Faculty members were well represented at the rally, expressing deep concern over the accreditation threat represented by the vote. Bethany Bell, a faculty member against the vote, addressed the crowd.

“They're messing around," Bell said. "They need to cancel their board meeting, they need to stop forcing votes and they need to bring in new candidates and let Chancellor Kelly serve as interim president,” Bell said about the board’s actions.

Other faculty like Hunter Gardner agreed with Bell and expressed annoyance at their lack of say in the presidential search process.

“This decision will affect everyone, and I think its great that so many people have shown up to show their support,” Gardner, a professor in the Department of Languages, Literatures and Cultures, said.

USC alumni joined faculty and students at the rally.

Markos Hurtt, a recent graduate and member of Next Era UofSC, explained how he wanted the movement to go forward even after the vote. Next Era UofSC is a group created to elevate student voices and has organized protests on campus.

Local people involved in the university also rallied against the board’s vote. Smith Breeden, grandfather of a rising freshman in the Honors College, attended the rally as a concerned citizen with his wife, Janine.

“The governor has no business sticking his nose in it," Smith said.

“As a high school educator, I went through many SACS evaluations and know how important SACS is," Breeden said. "I’m very concerned about what this is going to do to the university, to student aid, whether or not the degrees will mean anything, whether my masters work means anything,” said Janine, referring to the Southern Association of Colleges and Schools which gives the university its accreditation.

That same accreditation has been under threat following the governor’s involvement in the presidential search, which the SACS sees as “undue influence from by external persons.” Without accreditation, students would be unable to receive financial aid, among other things.

Former State Representative and USC alumnus Bakari Sellers, spoke at the rally in condemnation of the vote.

“While we're having a conversation about the health of this institution, I also think that the board needs to get younger, be more diverse and add a student voice to it,” Sellers said shortly after his speech.

Zechariah Willoughby, a second-year political science student attended the board of trustees protest in April and decided to attend this rally in protest of the process. Willoughby also pointed out the failed amendment in November 2018, which asked voters if they wanted the state education superintendent to be an elected official, as proof that South Carolinians want there to be a separation of politics and education.

Willoughby said his participation in the rally is focused on Gov. McMaster's efforts to push Caslen through as the successor to President Pastides. He also said if Caslen serves as president, he won't be successful with the protests from students and USC faculty's no confidence vote last Thursday.

Clint Saidy, a fourth-year mechanical engineering doctorate student, said he came to the rally because of the "flawed" presidential search process leading up to a vote this Friday. Saidy said he supports USC students having a presidential vote on the board of trustees, an idea which was brought up from Sellers. Saidy said he is still holding out hope that the board of trustees does not select Caslen this Friday.

"I hope before getting to the vote on Friday that the board will suspend the vote and go back into a good process where a diverse group of candidates are taken into consideration," Saidy said.