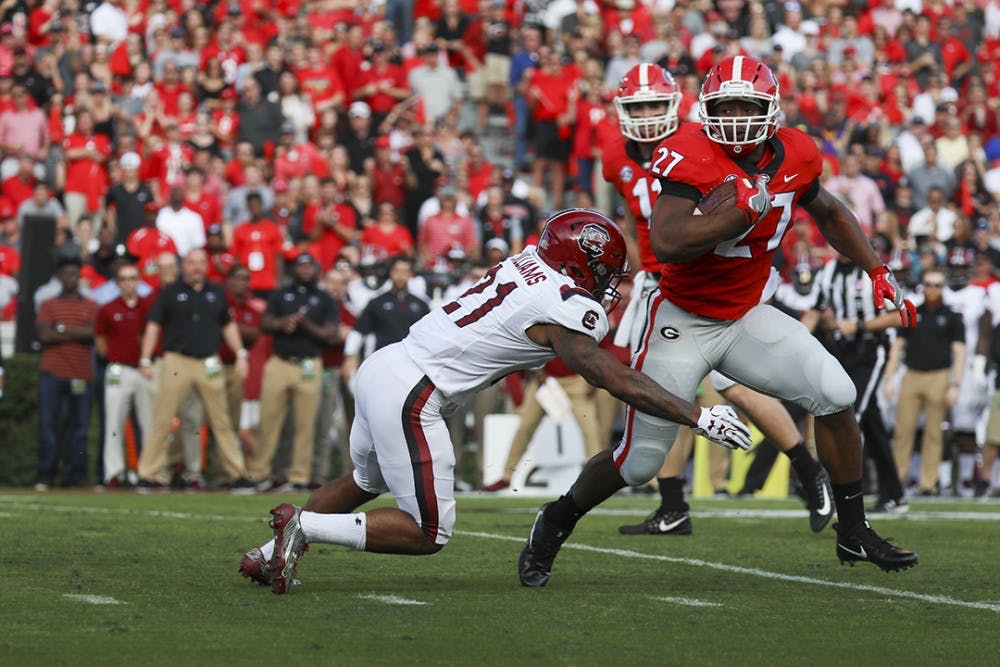 The Daily Gamecock predicts the SEC East for 2019

By Joe McLean, and Silvia Ramirez

SEC Media Days, set to begin on July 15, signals that the college football season is almost here. While there are press conferences, meetings and practices to be had over the next two months, this media event in Birmingham, Alabama is the unofficial start of the college football preseason.

Last season Georgia went 7-1 in the conference and 11-3 overall, finishing at No. 1 in the SEC East standings. The Bulldogs' strong season came with the help of rising junior Jake Fromm, who has been playing center and completely controlling the offense to his advantage throughout his time at Georgia. Last season, Fromm completed 206 passes, 25 more passes than he completed in the 2017 season. Additionally, the Bulldogs have rising junior DeAndre Swift as a running back. Last season, Swift ran for 1,049 yards and 10 touchdowns and he is projected as a high-round NFL draft pick. A strong offense wasn't the only threat Georgia had: They were just as strong from a defensive perspective. Cornerback DeAndre Baker was awarded the Jim Thorpe Award last year as the nation's best defensive back; however, with the loss of Baker to the 2019 NFL draft, Georgia will have big shoes to fill defensively. Overall, Georgia's chemistry on offensive is a tough one to break; it is a powerhouse and will most likely continue to be at the top of the SEC East at the end of the 2019 season.

The Gators, who posted a 10-3 record last year, are the pick for second place in the SEC East, behind defending division champion Georgia. Coming off a 10-win season, which included a win over the Gamecocks, the Gators are returning with a lot of players from last season, including quarterback Feleipe Franks and 13 of their 17 defensive players from last year. Gators head coach Dan Mullen exceeded expectations in 2018, and with a schedule that doesn’t include Auburn or Texas A&M, the Gators are in a position to build off of last season. The Gators have been notorious for having a stellar defense in the SEC; however, the biggest question will be whether Franks can limit his mistakes, as the veteran quarterback has been inconsistent at times throughout his career in Gainesville.

The Gamecocks are at a crossroads of sorts this year. Following a 7-6 season, which included a 28-0 loss in the Belk Bowl, South Carolina is looking to bounce back in 2019. They will have talent on both sides of the ball, as they return with veteran players such as quarterback Jake Bentley and wide receiver Bryan Edwards, in addition to adding highly recruited freshman lineman Zacch Pickens. However, the schedule is considered one of the toughest in the nation with teams like Alabama, Georgia and Clemson on the schedule. It is possible that this team will be better in 2019, but the record may not reflect it, given the talent of the competition. It will be vital for the Gamecocks to keep pace in the SEC after a disappointing end to the 2018 season and to maintain the improvements they have made under Will Muschamp, despite the level of competition.

The Missouri Tigers come in at No. 4 in the SEC East for our preseason picks. The Tigers are coming off a respectable 8-5 season. They gained quarterback Kelly Bryant, who transferred from Clemson, in place of former quarterback Drew Lock, who was drafted by the NFL’s Denver Broncos this past spring. Bryant was successful at Clemson and led it to an ACC title in 2017, bringing a new dynamic to the Missouri offense. However, Missouri is facing a postseason ban in 2019 due to NCAA violations. Additionally, Missouri has had problems on the defensive side of the ball recently. In 2018, the Tigers struggled to get to the opposing quarterback and ranked 108th in the country in sack rate; no defender had more than 2.5 sacks over 13 games. With the combination of questions to be answered, from defense to the bowl ban, Missouri will have a lot to prove in 2019 as they move on from the Drew Lock-era.

Kentucky is coming off one of the best seasons in its history, coming from a 10-3 in 2018. Head coach Mark Stoops was also the SEC Coach of the Year in 2018, further cementing last year’s Wildcats team as one of the best in school history. However, 2019 could be a different story, as they lost key players such as Josh Allen and Benny Snell, in addition to 12 other starters from last year. Quarterback Terry Wilson is back, but Wilson was inconsistent last year and was ranked 14th in the SEC for total passing yards. The schedule is not easy either, with games at Georgia, South Carolina and Mississippi State. The Wildcats just finished their best stretch of football in program history, but this self-proclaimed basketball school will have to prove themselves on the football field this year.

Tennessee does not have it easy on the field this year, as they face the Alabama Crimson Tide in Alabama. Tennessee was at the bottom of the SEC East standings in 2018 with their season ending 2-6 in the conference and 5-7 overall. In the upcoming season, besides having to face Alabama, the Volunteers are also facing Florida, Georgia and Kentucky. Tennessee still has too many struggles offensively to be a threat to Alabama, Florida, Georgia or Kentucky. Over the past two seasons, Tennessee has struggled offensively to move the ball. As they come into the 2019 season they must rely on a young team of freshman to carry the team because of injuries in the previous season. Starting a young core can be difficult, but may turn out in favor of the Volunteers with Wanya Morris and Darnell Wright likely to be starters this upcoming season. Tennessee was at the bottom of the SEC East standings last season but Vanderbilt may take the seventh spot this season and move Tennessee to sixth because of Vanderbilt's upcoming schedule.

Vanderbilt has a high chance of being moved from sixth in the SEC East in the 2018 season to seventh by the end of the upcoming season. The Commodores have a tough schedule; they do not play Alabama this season but they will have to go up against, Georgia, LSU, South Carolina, Florida and Kentucky. Vanderbilt has more of a threat this season than Tennessee does, although they are not playing Alabama. Vanderbilt's leader last season was quarterback Kyle Shurmur, who had 2,844 passing yards last season; however, he was signed this year as an undrafted free agent by the Chiefs. Without Shurmur leading the team, Vanderbilt will struggle offensively. Those struggles may push Tennessee to sixth in the SEC and Vanderbilt to seventh.