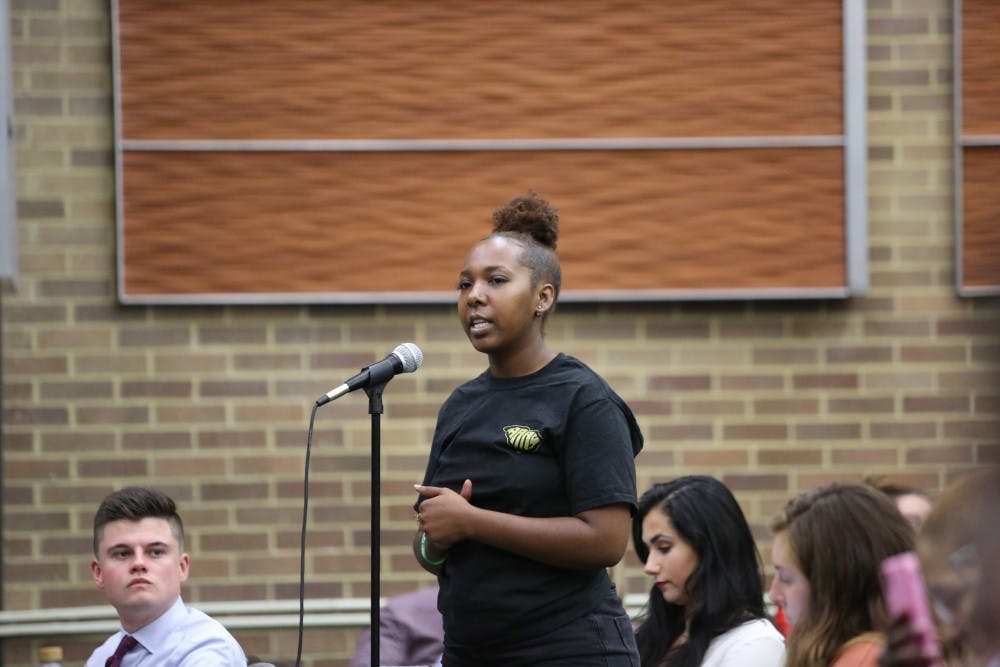 Student Government executive members held an open forum for USC students in the nursing building auditorium Wednesday evening to discuss the state of the university’s presidential search. Over one hundred students and faculty attended the forum to voice concerns over how Gov. Henry McMaster inserted himself into the presidential search.

Student Body President Luke Rankin presided over the meeting, flanked by Vice President Sophie Davish and Speaker of the Student Senate Davis Latham, and responded to students’ concerns for over an hour.

“We want to ensure that when we speak, when I speak to the board, that we are giving the voice of every student,” Rankin said.

He also displayed his view on the outcry from students to McMaster’s forced vote this Friday.

“Freedom of speech is a beautiful thing,” Rankin said. “We champion that here at University of South Carolina.”

During the course of the event, the dozens of students that spoke directly to Rankin were largely against McMaster's move.

Robert Buchanan, a fourth-year history student, took to the microphone several times to voice his concerns about Caslen’s opinions on diversity.

“Basically, I think this is just a thing for transparency,” Buchanan said about the event. “We’ve been ignored every step of the way."

One of the few dissenting voices was Robert Dean Cathcart, a third-year history student who supports Caslen's candidacy for president. Cathcart said the board should've voted in April, when the original candidates' forums ended.

Other students, such as Jacob Wilcox, a third-year public health student, criticized not only McMaster's actions, but also the accessibility of the forum itself and Rankin’s unwillingness to answer questions.

“It was held at 5 p.m., which was very inconvenient for many people, and then it was cut pretty short as well,” Wilcox said about the forum.

Wilcox said McMaster’s controversial move to force the hand of the Board of Trustees is his bigger concern with the presidential search.

The forum came after a series of updates to the USC presidential search, specifically a vote by the Board of Trustees planned for this Friday to confirm Robert Caslen as USC president. Caslen’s initial candidacy sparked protests due to his involvement in United States foreign policy, comments on the role of alcohol in sexual assaults on campus and his lack of a doctorate degree as required in the presidential search guidelines.

In an unprecedented move, McMaster pushed for the vote by calling members of the Board of Trustees individually to tell them to hold a meeting, according to The State. The vote, scheduled for 10 a.m. this Friday at the Alumni Center, is expected to draw even more protests from students.

USC students and faculty have started an online petition for the Board of Trustees, urging them to “stand your ground in the face of Governor McMaster’s efforts to force a vote on Robert L. Caslen to be the University’s next president." Additionally, alumni have written an open letter to the Board of Trustees and USC, sharing their disapproval of Gov. McMaster’s plan.

“Governor McMaster’s blatant disregard for the concerns, desires and perspectives of the student body in the search for and selection of a new president goes against so many of the things we as Gamecocks have committed to embodying both individually and collectively,” the open letter reads.