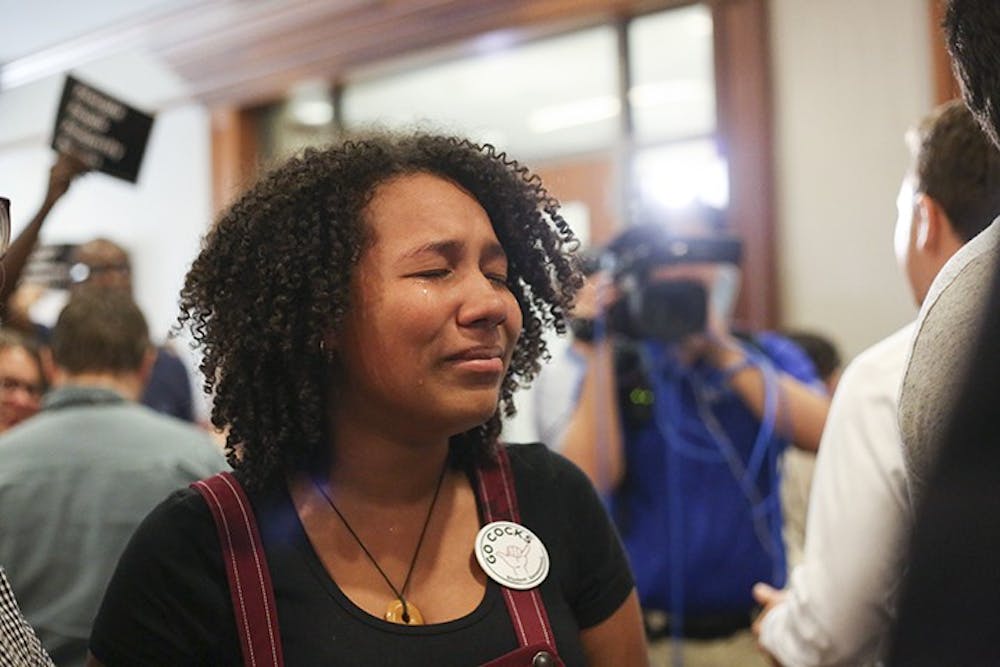 Protesters react to Caslen being selected as 29th USC president

In a dramatic vote at the Pastides Alumni Center Friday afternoon, the USC board of trustees voted Gen. Robert Caslen as the university’s next president to the dismay of students and faculty assembled at the center.

After observers and security filtered out, protestors chanted “shame” as trustees exited the boardroom.

The protestors of Caslen’s candidacy marched from Russell House to the Alumni Center Friday morning and stayed until its conclusion that afternoon.

Students like Ethan Magnuson, a second-year police science and geography student, voiced concern over the state of the university’s presidential search, which now faces accusations of partisanship.

“I feel that this is going to be a seminal moment in USC’s modern history about whether we are able to, as a university body, make our voice heard,” Magnuson said before the vote.

Deanna Smith, an experimental psychology student, said the vote worried her about both the university and Columbia as a whole.

“I love my state, with all of its flaws, and I feel like the governor should love it as much as we do and listen to us,” Smith said before the vote.

Ray Moore, a retired army reserve chaplain and veteran of the Gulf War, was one of the few Caslen supporters in attendance. Moore said Caslen's background as superintendent of West Point, which he described as one of the top educational institutions in the United States.

“He’s not just an average candidate,” Moore said. “He’s a really strong, illustrious candidate, and he would restore order to our university.”

Moore said he was disappointed at the student response to the presidential vote in favor of Caslen.

“They ought to be welcoming him," Moore said. "Instead, these students are acting like immature children and protesting it."

He also said students could learn from him and other “traditional people," who he considers more conservative and value military leadership.

“What am I supposed to do if my degree doesn’t matter anymore,” Smith said to the board as she was led out of the voting chambers.

“Where am I supposed to go? This is my home.”

Students in the crowd also stressed concerns with the search process.

“I think it's gone so far beyond what people think of the candidate and delved into the realm of our national and partisan politics,” Rosa Weiss, a student protestor, said.

Bethany Bell, faculty welfare co-chair, was a vocal protester following the vote and held a press conference after all board members had dispersed from the meeting. Bell said Gamecocks4Integrity has an open forum next Wednesday at Williams-Brice Auditorium at 5 p.m. to discuss a restructuring of the board of trustees, diving deeper into the “political influence."

“This is for all that care about the integrity of this institution," Bell said.

Luke Rankin, student body president, said in the past week and a half that he and other Student Government members have been listening to students, he gathered that they feel they haven't been heard during the search process. However, students criticized Rankin for his lack of taking a side during the process.

Rankin said student body presidents should have a vote on the board of trustees and that it is something that he is "looking into." However, Rankin wouldn't disclose how we would've voted today, if allowed.

“As the current students of the university, we are the next generation, and it's going to be our responsibility to be the ones to build the world,” Asher Wood, whose voice was hoarse from chanting at the board, said.