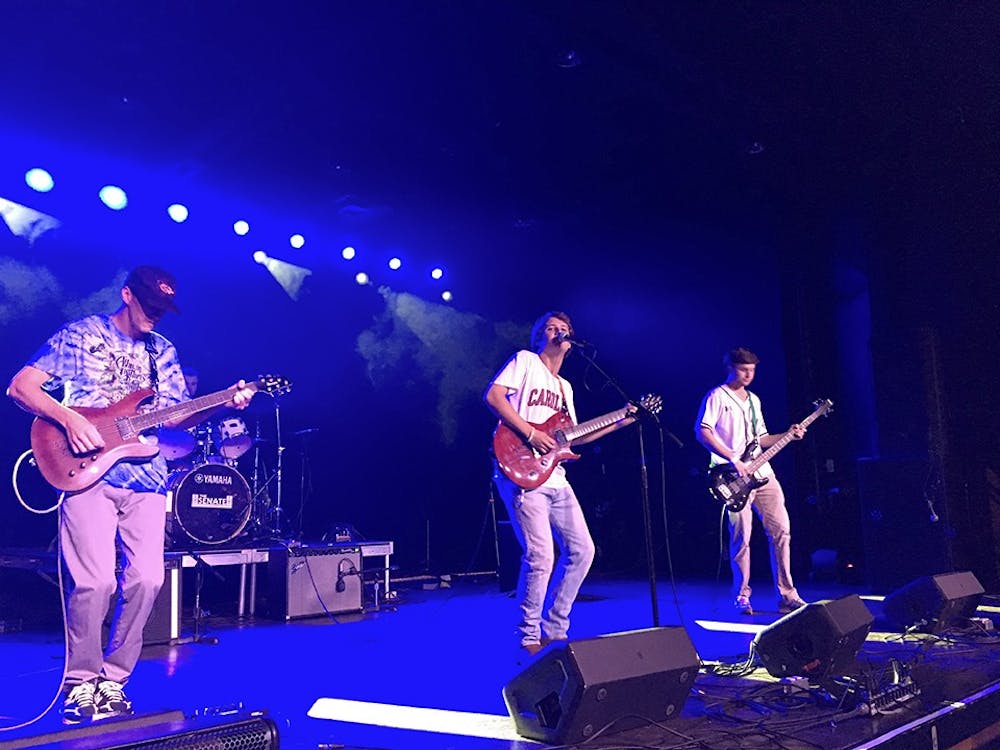 Battle of the Bands returns to The Senate, crowns student winners

By Stephanie Allen, and Mary Comtois

Students gathered at The Senate Monday night, starting the first week of school off with live local music at Battle of the Bands. Colin Davis, Diminished Continuum, Mary English and Devine Street and The Shed faced off in a competition organized by Carolina Productions.

USC’s own Pat X, a film instructor by day and rapper by night, hosted the event. The night was filled with rock music, punctuated by Pat X’s laidback rap between sets to keep the crowd engaged.

Diminished Continuum, a band self-proclaimed on Instagram as “3 broke college students + 2 dumb blondes,” took home the winning title. Though the performance was the band's first time playing for “people and not parents,” according to lead singer and first-year psychology student Mckenna Simmons, the band performed with great energy and enthusiasm. Though guitarist and USC first-year marketing student Kevin Nickens thought the other bands were “just like us, only better,” they had no trouble winning over the crowd or the judges.

Mary English and Devine Street returned to Battle of the Bands, performing an original piece alongside their covers. Though now in her fourth year, Mary English met her bandmates through classes as a freshman at USC. The group has been performing together since their second year on campus. English said Battle of the Bands is an event she would like to continue attending because it's different from their typical audience.

“It’s cool doing a student-run kind of show, which we don't really do that often, so it's cool to reach out to students and get that kind of fan base," English said.

Shanna Pumphrey, a first-year retailing student, definitely plans to return for the next Battle of the Bands.

"I love it. I've never really been to one of these, but I've always wanted to come, and the atmosphere is great, and everyone’s so nice and the bands are amazing. It’s just been so great,” Pumphrey said.

Not all audience members were as enthusiastic about returning as Pumphrey. USC accounting student Dorothy Sideris said the event would be worth returning to if there's more people. USC international business student Caroline McBride agreed, saying it was hard to find out about.

The night ended with the announcement of Diminished Continuum’s victory. However, Mckenna Simmons’s favorite part of the night wasn't the victory, but rather being on stage and losing track of time performing for the audience.

“There’s nothing like being behind that kit and playing," said Diminished Continuum's drummer Chaney Donald, agreeing with Simmons. "You just get lost in the best feeling.”